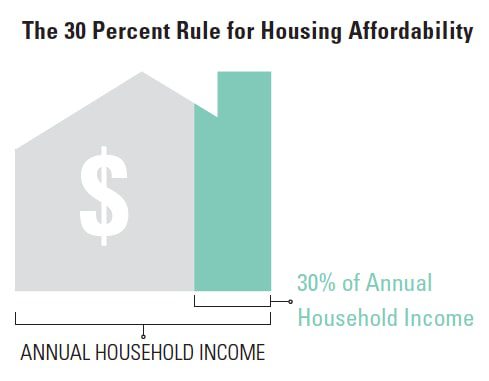 A deeper dive on the report on housing costs

It is a fact of life for many low- and middle-income households that they need to make difficult choices when it comes to paying for the kind of home they need versus their other obligations, like health care, childcare, or even what type of groceries they buy. For those with student debt or trying to save for retirement, the pressures are even greater.

Of those items in a household budget, one of the most “impactful” is the cost of housing. Not only can housing consume a third or more of a household budget, the external factors of that home – regardless of whether it is a single-family, condominium, or rental apartment – can have profound effects on one’s life outcomes.

Is the home safe from health hazards, like lead paint and mold? Is it in a walkable neighborhood or near jobs and transit? Are there good schools for children to attend? All these issues, and more, make for the fact that one’s zip code can be more predictive of a person’s life outcomes than their genetic code.

With more than one in three Rhode Island households paying too much for housing, by government standards, these are hard choices that are likely having negative impacts across Rhode Island’s communities.

Cost-burdened by housing costs
According to the newly released 2019 Housing Fact Book, more than 140,000 Rhode Island households – or 35 percent – are considered housing cost burdened, spending more than 30 percent of their income on housing. When Rhode Islanders’ incomes and housing costs are out of alignment, there is a chain reaction.

The total estimated dollar value of the housing cost burden across the state’s households is nearly three-quarters of a billion dollars. Homeowners with mortgages are paying an average of nearly $7,000 above the threshold; for renters, that figure is just over $5,000.

“The amount of money that is collectively being overspent [$733,107,777] on housing costs in Rhode Island, is astronomical,” said Brenda Clement, director of HousingWorks RI. “This money, which could otherwise be spent supporting local businesses, going towards education, or put into savings, is instead, burdening Rhode Islanders. It is now, more critical than ever, for the state to establish dedicated long-term funding to the development and preservation of affordable homes, so that every Rhode Islander has a safe, healthy, and affordable place to call home.”

HousingWorks RI at Roger Williams University has been producing their annual Fact Book since 2006 in order to highlight the issues around housing affordability in the state and within every municipality. Since 2017, the Housing Fact Book has also featured regional pages, which look at systems that cross municipal boundaries.

This year, in keeping with the factors of cost that impact Rhode Island households, the regional pages highlight the combined affordability of housing with transportation costs, which the Center for Neighborhood Technology produces as a “Housing and Transportation Affordability Index.”

The Center suggests that the combined cost of housing and transportation should be no more than a total of 45 percent of a household’s budget. Given the prevalence of households already paying more than 30 percent of their budget for their home, it is nearly impossible for many Rhode Islanders to achieve that ratio.

The housing churn
When a household is forced to contend with housing that is no longer affordable to them, moving is a difficult option. Not only are there costs associated with moving that only further the household’s financial burden, but residents are often already located near resources they rely on, like family members or jobs. There is a robust academic literature on the linkages between gentrification and displacement, but without any conclusive data. Given Rhode Island’s size, it is hard to escape rising prices and rents, regardless of where one goes.

In seeking solutions, there is a growth in the discussion of housing types that may present cost savings due to smaller home sizes and new technologies. One local example recently celebrated a groundbreaking in Olneyville, where ONE Neighborhood Builders will construct five “small” homes, with an average net floor space of 750 square feet. There are many more kinds of homes to be explored, especially for the growing population of households of two persons or less, including accessory dwelling units and modular homes.

These new types of homes, though, may face difficulties in local zoning regulations, and sometimes in financing as well. As ideas are generated, it is critical that all stakeholders be part of the discussion.

“Across the United States, more and more municipalities are recognizing the value in thinking strategically about planning housing and transit near jobs,” said Stephen Antoni, HousingWorks RI Advisory board chair and former president of the Rhode Island Association of Realtors. “We in Rhode Island cannot afford to overlook these connections to our state and local economies. With the state currently involved in strategic planning for both housing and transit, the time is now to cement these connections in order to ensure that accessibility is a reality for all Rhode Islanders.”

Beyond the facts of affordability and regional transportation, the 2019 Housing Fact Book provides insights into the funding and need for safe, healthy, quality long-term affordable homes, across the state and within each municipality.

Annette Mann Bourne is the Research and Policy Director at HousingWorks RI at Roger Williams University.

The full book is now available on the HousingWorks RI website at www.housingworksri.org.