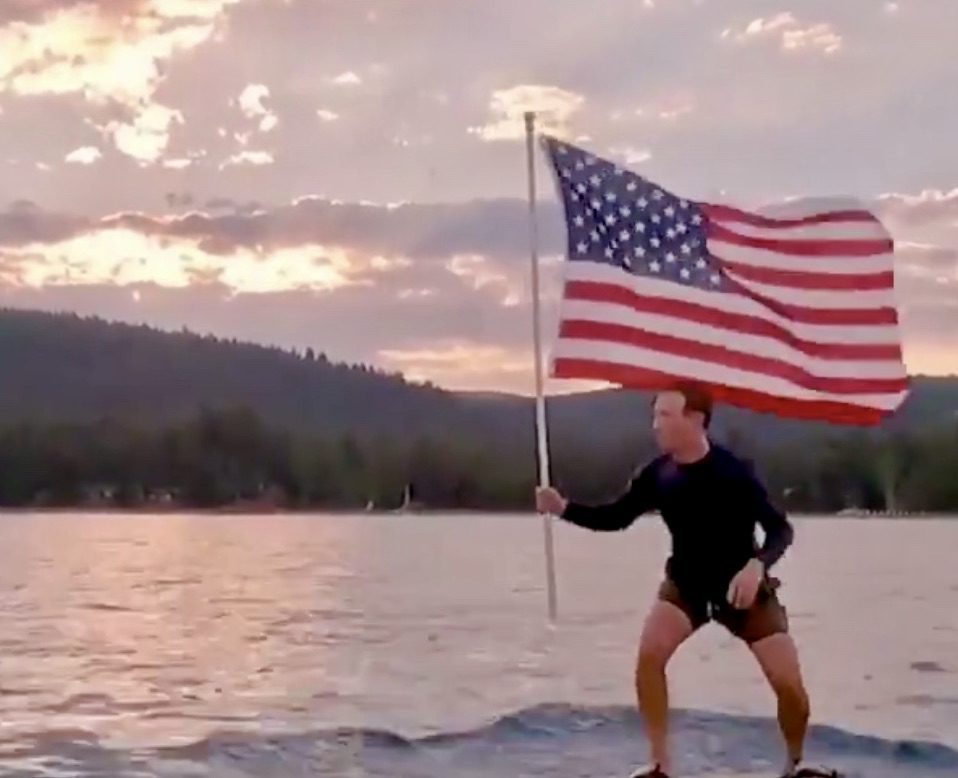 Well, we just had to post this – put the sound up…

How many times will you watch and listen to this?

Zuck’s reverence for the United States of America – for entrepreneurial freedom that can make you wealthy and successful. A nerdy college kid exploding with technology which has changed the world, and to which we are still adapting.

Some think he was mimicking the famous painting of George Washington crossing the Delaware, flag held high. That painting, at the Metropolitan Museum of Art, captures the spirit of this daring undertaking and illustrates America’s capacity to overcome adversity at great odds.

His choice of John Denver’s “Take Me Home, Country Roads” is not about West Virginia, or Maryland, the original inspiration for the song, but it is a ballad about the little winding roads we take going to the place we call home – broadly interpreted as the United States being Zuckerberg’s home. “Country roads, take me home – to the place I belong”.

The flag is not accidental – and Zuck’s social media team must have had their own sit-back in its inclusion.

What does our flag represent? As you see the flag waving along all our country roads today?

Thirteen equal horizontal stripes of red (top and bottom) alternating with white, with a blue rectangle, referred to as the “union”, bearing fifty small, white, 5-pointed stars arranged in nine offset horizontal rows, where rows of six stars alternate with rows of five stars. The 50 stars on the flag represent the 50 states of the USA The 13 stripes represent the 13 British colonies that declared independence from the Great Britain, and became the first states in the US.

As we declare what history we teach our children in school – let us never forget to teach the great experiment of the founding of the United States of America – it’s growing pains, it’s foibles, it’s beauty – and our commitment to come together to make this work in progress the best it can be. Divisiveness leads to no celebrations of success. And makes for rocky and uncomfortable country roads. Only together could the American experiment have brought us the greatest country in the world. Only together can we continue to change it. And live our own lives in a positive and contented way.