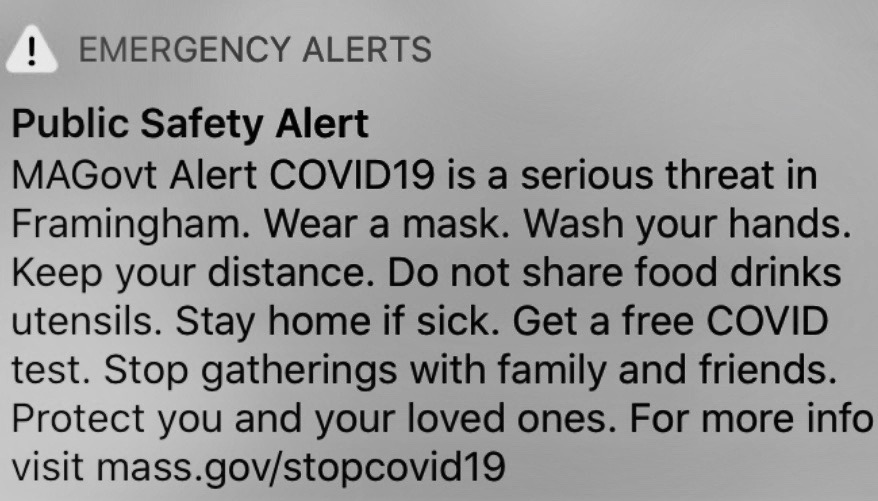 Photo: Massachusetts cell phone users are beginning to receive emergency alerts on their phones. This is not – yet – activated in Rhode Island – as case numbers soar, look for creative ways to receive the coronavirus warnings.

Fauci: COVID-19 numbers would have to “get really, really bad” before advocating national lockdown

Wales is going into a “two-week firebreak” – what they call a total two week lockdown to get hold of the virus – the UK may not be far behind.

At least 4,200 children in New York had a parent or caregiver killed by COVID-19, and 325,000 children were pushed into or near poverty because of the pandemic’s economic fallout.

Ski resorts in New York will be allowed to open next month at half their indoor capacity with restrictions on sharing gondolas, and face coverings will be required off the slopes,

Mark Cuban: Every household in America should receive a $1,000 stimulus check every 2 weeks for the next 2 months

Poland has transformed an athletic stadium into a hospital

Liverpool, England mayor, who had contracted coronavirus, says his brother has died after contracting virus

Schools become high-risk environments for transmission given the “close and prolonged contact” with large numbers of people in buildings that are often poorly ventilated and have many high-touch surfaces.

While children are less likely than adults to become severely ill or to be hospitalized, approximately 0.2%- 7.9% of children with SARS-CoV-2 were hospitalized, according to the American Academy of Pediatrics and the Children’s Hospital Association.

Masks are mandatory in Nashville.

Several U.S. officials, including a senior figure at the State Department, are now self-isolating after meeting with a Lebanese spymaster who has tested positive for the coronavirus.

An investigation into an outbreak at Brigham & Womens Hospital points to a highly infectious patient who had tested negative, twice. 42 patients and 15 staff were impacted, none seriously.

Talk starting about shortages at the grocery store with items such as cleaning products – and toilet paper.

FedEx has moved to seven-day-a-week pickup.

USPS will change its priority to holiday shipping after the election rush.

Jury trials have been pushed back to November in Massachusetts

The President said Monday that “Dr. Fauci is a very nice man…sometimes he says things that are a little bit off. He’s been there for about 350 years, I don’t want to hurt him.” – referring to his flip-flopping on advice such as no mask wearing, mask wearing – closing up the country, then opening up, etc.

Adults are at higher risk of severe illness than children in schools, consequences of transmission will be highest among teachers, staff, and adult household members

The WHO now says lockdowns should not be the primary way to fight COVID19 – the intent is only “to make poor people a whole lot poorer”.

Cases in the world have exceeded 40 million.

CVS will hire 15,000 new employees to gear up for vaccine deployment.

Vermont is credited with doing among the very best in the US in swiftly flattened its initial wave and has since gone weeks at a time without any new confirmed deaths. Fewer than 60 people have died, giving the state the second-fewest deaths per capita.

Fewer Americans are willing to take a Covid-19 as soon as it’s available, a survey from STAT and The Harris Poll finds. The decline is particularly marked among Black Americans — and suggests there’s growing concern that the regulatory approval process for the vaccine has been politicized. Overall, 58% of respondents said they’d immediately get a vaccine, down from 69% in mid-August. The disparity is even larger when it comes to race: Only 43% of Black individuals would take the vaccine, down from 65% two months ago.

Johnson & Wales going back to school this week

Half the hotels in Rhode Island may close in 2021 without state/US aid to recover, according to the Rhode Island Hospitality Association.

Politico calls out RI for making sure students and teachers can get tested for coronavirus has been key to reopening schools, and how the Governor led a statewide plan utilizing National Guard to bring most public school students back for in-person learning this semester.

In a Providence Journal story on better outcomes for those with coronavirus, Dr. John Stoukides, chief of geriatrics and palliative medicine and vice chairman of medicine at Roger Williams Medical Center in Providence, said in an interview. “It’s still a bad disease; People still die from it. But all the hospitals in the state are getting much better at managing the complications. It’s not as terrifying as it used to be, seeing the patients come in.”

A new grant opportunity for Providence-based microbusinesses adversely impacted by COVID-19. The microenterprise (MicroE) grant program will support approximately 23 low-to-moderate income entrepreneurs and business owners in Providence with grants of up to $10,000. Grant applications will be available on Thursday, October 29 at 9 a.m. EST. at http://rilisc.org/microenterprise-grants-pvd. Complete applications will be reviewed on a first-come, first-served basis by the LISC Rhode Island team.

The Small Business Development Center is offering through the Charlestown Economic Improvement Commission, an online webinar for small businesses –  “How Can I Make It Through This?” Small Business Tips, Resources, and Stories. Register here, for this webinar which will be held Thursday, 10/22/20, from 10 a.m. – 11:00 a.m.

Release the CARES money: “Every administrator, mayor, is completely frustrated with this process,” said Tiverton Town Administrator Christopher Cotta told the Town Council this week before they voted unanimously to pass a resolution calling on Governor Gina Raimondo and the General Assembly to take action by unknotting the purse strings and sharing some of the proceeds. Tiverton has joined other municipalities in the state that have already passed the resolution asking the governor and the General Assembly to “develop and execute a plan for distributing a portion of the Coronavirus Relief Fund to cities and towns, taking into consideration both unbudgeted and unreimbursed expenditures and lost revenues by each city and town across Rhode Island as a result of the COVID-19 emergency.”

Rhode Island Commerce recently announced an expansion to and increased funding awards for the Restore Rhode Island grant program. With grants of up to $30,000 available to help even more of R.I.’s small businesses and non-profits, now is a great time to apply to the Restore RI grant program. They will do a live Facebook webinar on Tuesday, October 20 at 10:30 AM. Topics will include an overview of recent updates and increased eligibility parameters. Go here:  https://www.facebook.com/events/1711470062359629/

We’re seeing a concerning trend in our data. Our cases and hospitalizations have been slowly ticking up for the last couple of weeks, and it’s becoming clear that we’re trending in the wrong direction. We’re seeing an overwhelming pattern of cases from small gatherings of family and friends – people who are complying with our gathering limit but are not wearing masks or socially distancing with those who don’t live in their household.

This is how community transmission happens. We start to feel safe around a small group of people, and we take off our mask, share food, or sit close to one another. But then the people in that group go off to their families and to their workplaces, and a few cases quickly become many. That’s what we’re seeing in Rhode Island. The good news is that it’s not too late to stop this trend. If we all buckle down now and recommit to being serious about following the rules, we can turn our situation around before it gets out of control.

We need to be wearing masks more often. Anytime you’re with people you don’t live with — wear a mask. Even if it’s just with a small group of people in the comfort of your own home. Even if you’re only going for a walk with a neighbor. We feel safe in these settings, and that’s when the virus spreads. If we take off our masks, we could be spreading the virus without even knowing we have it, and our friends will then go into work and see their families, and it doesn’t take long before it spirals. So let’s make mask-wearing our default.

We also all need to be getting tested more often. Doing asymptomatic or “sentinel” testing is key to our overall testing strategy, and it is especially important now. It allows us to better understand where our problem areas are and take a more targeted, precise approach to our response. And it helps you better protect your friends and family when you may not even know you’ve been exposed.

If you fall into one of the groups that qualify for asymptomatic testing, which are listed here, please go to portal.ri.gov and sign up for a free test. Over the next week, we’ve set a goal of running 4,000 asymptomatic tests.

Halloween is two weeks away. Trick-or-treating will still be allowed, but it’s going to look different this year. We’re asking that you go in small groups, stay six feet apart, and wear cloth masks the entire time. In addition, we’re asking everyone to do your trick-or-treating in the daylight. As it gets darker, it gets more challenging – and less safe – for kids to be spread out in the way they need to be. So this year, I’m asking families to start a bit earlier and be home before sunset.

Do not, under any circumstance, have a Halloween party. Cases and hospitalizations are rising, and your decision to have a party will put more people in the hospital.

I also know people are already starting to plan for Thanksgiving. Please, keep it local this year and do not travel. We’ve talked all along about how our actions impact the case numbers we see a few weeks later. Well, three weeks after Halloween is Thanksgiving. And a month after that is Christmas. We were under a stay-at-home order for Easter, and Passover, and Ramadan. None of us wants to be back under a stay-at-home order for Thanksgiving or Christmas. But if we don’t recommit ourselves to following the rules today, then it’s not out of the question.

We’ll end with this viral video – encouraging mask-wearing – while this is a very serious topic, sometimes humor is the best facilitator...