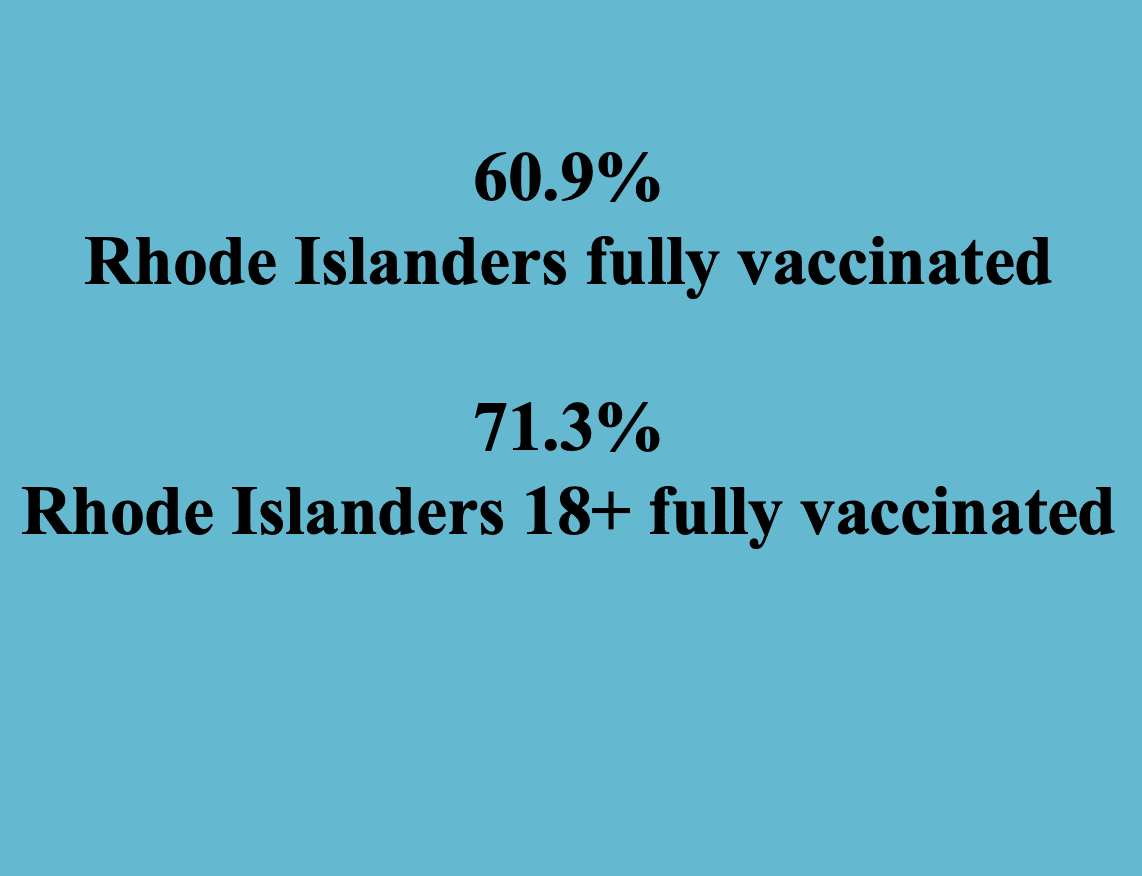 SouthCoast Hospital is considering a vaccine mandate for their employees. This may be the first healthcare group in the RI area to do so. The hospital has not yet responded to requests to confirm.

At least a dozen new cases of Delta variant COVID have been diagnosed in RI.

6 testing sites geared for teachers and students will close July 31 – with more on-site testing sites set to open in the fall – in school. These are the sites closing:

In Provincetown, masks are now required indoors, regardless of vaccination status, with 130 new cases announced.

150 Connecticut college students will begin training to go out into to try to combat COVID-19 vaccine hesitancy among young adults.

The Kingston Chamber Music Festival will perform all its concerts at URI’s Fine Arts Center – all performances are sold out but will be available in the fall online – kingstonchambermusic.org

The Tennis Hall of Fame is back in Newport – with spectators.

Gov. McKee has extended the emergency order for Rhode Island

MA will shut down its last mass vaccination site this week

Rhode Island is the first state in the United States where all institutions of higher education, including public and private organizations, will require COVID-19 vaccinations for students returning to campus this fall.

15 seafarers from Siem Car Carriers were vaccinated against COVID-19 aboard the Siem Plato car carrier ship on the morning of July 6th at Quonset Business Park’s Port of Davisville. These crew members were given the Johnson & Johnson vaccine by staff of the Rhode Island Department of Health.

URI will hold 12 vaccination clinics beginning in August and running through September for students and staff needing to be vaccinated.

Valets at Twin River who were laid off in the pandemic were told they would be hired back, but this has not happened since the Casino was reopened in May. 35 Valets and 4 Shuttle Drivers are impacted. Twin River says they will be recalled in September and it has been health and safety concerns – from NBC10 report.

URI will require proof of vaccination or an approved exemption to live on campus. URI spox said, “I’d be surprised if we weren’t doing all we can to deal with those requests while being as responsible as we can for the public good – the entire URI community”.

1700 new jobs have been announced by RIDLT.

After 237 years, Becker College in Leicester, MA has closed.

The RI DMV will be permanently on appointment-only status – a hold over from pandemic days that has shown to improve customer experience.

Woonsocket’s Autumnfest will be a go for Columbus Day.

Some are referring to the current uptick as the “4th Wave”, particularly targeting the unvaccinated.

President Biden has restated what he said about Facebook & mis-information: “60% of misinformation has come from 12 individuals on Facebook. FB is not killing people; these 12 people are killing people. Facebook should not take [what I said] personally.”

The American Academy of Pediatrics is now recommending universal masking in schools for everyone older than 2, including staff and faculty – regardless of vaccination status.

Canada will admit fully vaccinated US citizens on August 9th; others on September 7th.

Kara Eaker, an alternate on the U.S. Women’s Gymnastics team tested positive for COVID19 and is in quarantine with another member of the team. Both were vaccinated. Simone Biles is not reported to be impacted.

Katie Lou Samuelson, of the US Basketball team at the Olympics has tested positive. She had been vaccinated.

3 South African Olympics men’s soccer team members have tested positive and 21 others have come into contact with them.

Olympics medals will be presented on trays – athletes will put them over their own necks.

COVID has hit at least seven Olympic teams arriving in Japan barely a week out from the July 23 opening ceremony and after host city Tokyo reported its highest daily tally of new COVID-19 infections since late January. Olympic delegations from Uganda, Serbia, Israel, Brazil, and several other nations have been impacted.

2 NFL teams are below 50% vaccination rate – 13 teams are above the suggested 85% rate – teams report to training camps in 11 days.

ABC/ESPN broadcaster, Jay Williams has tested positive and will not cover the remainder of the NBA Finals.

States with low vaccination rates are leading the new coronavirus numbers — Arkansas, Florida, Louisiana, Missouri and Nevada – with most cases coming in Florida.

Delta variant is expected to do a lot of damage in communities with pockets of unvaccinated – including children.

CDC Director says reopening schools needs to happen with in-person learning. If not eligible for vaccines we can keep them safe by surrounding them with people who are vaccinated and keep a mask on inside.

Pregnant women and 20-40 year olds are showing up in hospitals now.

Nearly all who are sick with COVID now, who are over 18 and able to get vaccinated chose not to be vaccinated. In most states with high hospitalization rates, vaccines are plentiful and sit, unused.

A small Italian town, one of the first to have mass COVID19 infections has been tested for antibodies, 9 months after. Antibody levels remain strong.

Morgan Stanley has told all employees who are able to be back in the office after Labor Day.

More than one mayor in California has told their employees if they work directly with the public and they have not been vaccinated, they will be assisted in finding other work.

LA has reinstituted a mask mandate for indoor public spaces. Vaccinated and non-vaccinated.

Vaccines not expected for children under 12 until next year, while CDC reviews safety data.

Tokyo hits a 6-month high for COVID cases as Olympics set to begin without fans in the stands.

A vaccinologist and research said that if vaccination rates among adults and kids 12 and older continue to lag amid increased spread of the virus, the youngest members of the population will be most affected.  – “Transmission will continue to accelerate … and the ones who will also pay the price, in addition to the unvaccinated adolescents, are the little kids who depend on the adults and adolescents to get vaccinated in order to slow or halt transmission.”

80% of children aged 12 to 18 are unvaccinated in Tennessee.

The U.S. is sending more than 1.5 million doses of Moderna’s Covid-19 vaccine to Sri Lanka

Plan to vaccinate teenagers in Greece sparks huge protests in Athens and Thessaloniki.

29% increase in overdose deaths during the pandemic

30% of immigrants in U.S. detention centers are saying no to the COVID-19 vaccine

“We can’t have it both ways; we can’t be both unmasked and non-socially distant and unvaccinated. That won’t work,” said Dr. Jonathan Reiner, a CNN medical analyst and professor of medicine and surgery at George Washington University.

Dutch leaders are telling people to work from home again.

Pfizer will be talking with US health officials about developing a booster.

The FDA has a new warning that the J&J vaccine may be linked to Guillain-Barré syndrome. This type of warning is carried on most vaccines such as shingles and flu.

Tokyo has banned all spectators at the Olympics – some event held outside of Tokyo may have limited spectators.

The WHO is calling on “richer” countries to share their vaccine with countries in need.

US Tennis star Coco Gauff has tested positive at the Olympics and has withdrawn from competition.

One of the issues in the Cuban protests involves access to vaccine.

England will remove all restrictions this week and open up fully. 87% of the population has had at least one shot, 66% have received both shots.

Americans unemployed for more than a year has increased by 248,000 to 2.9 million.

North Korea has rejected planned shipments of AstraZeneca’s Covid-19 vaccine being organized under the global COVAX distribution plan due to concerns over side effects, a South Korean think-tank says.

The Delta variant is being referred to as “COVID on steroids”

During the first wave of the virus, 15 percent of home buyers said they bought multigenerational homes, the highest share since 2012

In Indonesia the virus is spreading so fast, officials say, “It’s up to the family to keep their loved ones alive.”

NYC has halted moving the homeless out of hotels they were housed in during COVID19 after Legal Aid won an argument in court.

For the first time since early January, Covid-19 cases are rising in all 50 states

Several California restaurants are reacting cautiously to the rise in COVID cases, with some saying they have decided to lay off any unvaccinated employees and announcing changes in their mask requirements for employees and customers.

Because of the high vaccination rates in Chicago, the 2021 Chicago Auto Show is happening.

Canada could start allowing fully vaccinated Americans into Canada as of mid-August for nonessential travel and should be in a position to welcome fully vaccinated travelers from all countries by early September.

The Stock Market is reacting to new fears of coronavirus, plummeting over 700 points in one day – but with recovery coming the next.

Medical schools and teaching hospitals should require their workers to get the COVID-19 vaccine, the Association of American Medical Colleges

5 of the Texas Democrats who chartered a private jet to go to Washington, D.C. to avoid a vote in their legislature have tested positive for COVID-19 – supposedly they had all been vaccinated. They have met with VP Harris and flew without the required masks. A few have mild symptoms.

VP Kamala Harris went to Walter Reed Hospital after the positive testing of the Democrats from Texas for a “routine medical checkup” on Sunday night. No further information was released.

Sydney, Australia, this week is entering a hardcore COVID-19 lockdown as infections in New South Wales continue to spike. Residents are required to carry a mask at all times; nearly all stores have been shut down barring those the government deems “essential.” Employers can face fines up to $10,000 if they order employees to come to work. Melbourne is imposing harsh restrictions on residents of the capital city, including a one-hour-per-day limit on outdoor activities and a curfew beginning at 8 every night.

The CDC warned people who are immunocompromised that the COVID-19 vaccine may not have been effective for them and encouraged them to take precautions as if they were not vaccinated.

So many people are quitting their jobs it’s being called “The Mass Resignation” – this is particularly true of fast food locations – and they are getting new and better jobs almost immediately.

Poor countries have vaccinated approx. 1% of their population, compared with 55% in the United States and about 25% globally. They are at the mercy of richer countries to donate their vaccination supplies.

For now, CDC regulations will stay in place for cruise ships: “The undisputed evidence shows that unregulated cruise ship operations would exacerbate the spread of COVID- 19, and that the harm to the public that would result from such operations cannot be undone,” the CDC said in a court filing.

Houston is upping their Vaccination sites – located now all across the city with walk-ins and evening hours, as well as in-home vaccinations for seniors, disabled and veterans.