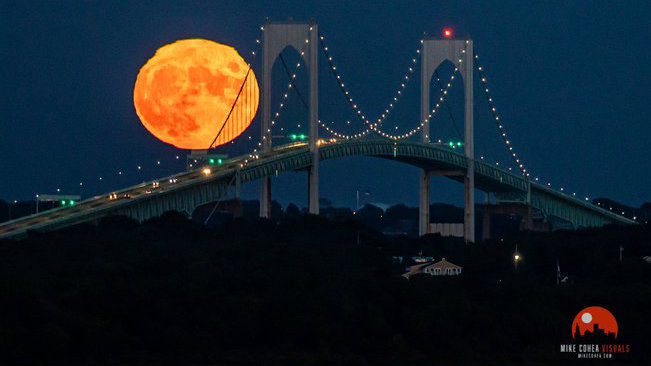 Will $1.1 billion be enough to rescue RI? – Richard Asinof

Photo by Mike Cohea, used with permission – The harvest moon rising above the Newport Bridge.

Despite the “largesse” of unspent federal funds, the state may soon be forced to operate under triage, as the safety net frays and community systems break down

Years ago, a TV producer working for WCVB Channel 5 in Boston had called me up to ask about the massive James Bay hydroelectric project, in advance of the Chronicle team traveling to Québec: “Are you for it or against it?” she asked.

I had laughed out loud at what seemed to me the glibness of the question, which attempted to put a binary choice onto the complexities of the gargantuan electricity project, constructed by the province-owned utility, Hydro-Québec, that had dammed and rerouted dozens of rivers on what once had been Cree and Inuit land, creating one of the largest hydroelectric projects in North America.

I had attempted to explain some of the underlying complexities in the politics of the James Bay hydroelectric project: how it strengthened the economic arguments of the Parti Quebecois to secede from Canada; how the import of electricity from James Bay into New England was seen as a potential offset to the need for future coal or nuclear power plants; and identifying some of the long-term environmental consequences in flooding of millions of acres of indigenous people’s land.

Oops, she said, I have to take another call coming in, and hung up.

Divide and distract
There can be no convergence when the news media attempts to divide the world into binary choices, yes or no, making it that much more difficult to talk about – and to understand – the competing narratives around scarcity, abundance, and the ever-elusive prosperity. Politics is still the story of who gets what, when, and how, as Harold Lasswell once observed.

Everyone is busy weighing in on how best the money should be spent. Gov. Dan McKee penned an op-ed for The Providence Journal [and the Governor is slated to begin a pubic relations campaign on Monday, Sept. 27, to promote his agenda to begin spending some of the funds immediately]. Both the R.I. House and R.I. Senate have held hearings about potential investment strategies, and the Rhode Island Foundation plans to release soon its ideas for three or four big ideas on how best to invest the money.

Pivotal moment
The brilliant photo by Mike Cohea, which captured the harvest moon rising over the Newport Bridge last week, marked the change in the tilt of the rotational spin of the Earth as the northern hemisphere moves further away from the sun, as we enter a period of growing darkness, with the shorter days and longer nights of winter approaching.

Here in Rhode Island, we have arrived at a pivotal moment in our own rotational spin. The question is: how will the investments of yet-to-be-spent federal funds move us back toward light again?

I see a good/bad moon rising
A narrative of optimism has pervaded the possibilities that such investments from the unspent federal funds can jump start Rhode Island on the path toward future prosperity, particularly from the institutional voices.

At the same time, just as the coronavirus pandemic has made the deep racial and health disparities in the state more visible and harder to ignore, the conversations around how to spend the largesse in federal funds have revealed how wide the economic divide is between the well-to-do and the marginalized residents of Rhode Island – or, to use a maritime metaphor, the divide between those traveling on the luxury deck versus those trapped below deck in steerage.

• On the housing advocacy front, a coalition of housing groups under the HomesRI umbrella has put forth a detailed, comprehensive $500 million plan, on how best to invest the money. [See link below.] The plan of action put together by the Housing Network of Rhode Island, Housing Works RI, ONE Neighborhood Builders and Crossroads Rhode Island attempts to translate the urgency of the affordable housing crisis into achievable results, with metrics to measure outcomes.

Housing is where jobs go to sleep at night, as Nicholas Retsinas, chair of Rhode Island Housing’s board of commissioners, explained the conundrum.

• On the health and human services advocacy front, a coalition of 70 community agencies providers has written a letter to Gov. McKee and the R.I. General Assembly leaders, which demanded that a special session be convened this fall and that a minimum of $100 million be invested in increasing the wages of the workforce. Without that investment, the letter warned, “The result could be a catastrophic collapse of the state’s health and human services sector as the viability of these services comes into question. At risk are tens of thousands of jobs and the wellbeing of the most vulnerable Rhode Islanders those jobs support.”

Translated, advocates working on the front lines have made a compelling case that a total of $600 million needs to be invested to shore up the failures of state government to make meaningful investments in the social fabric that has been torn asunder.

The engine warning light has been blinking furiously on the state’s economic dashboard for years. The questions is: What happens if and when community activists and advocates challenge the status quo about what programs get funded? How can they participate in the decision-making?

The courage to stand up and say no
The story of how recovery community advocates forced Gov.McKee’s team to rescind more than $2 million in program cuts, successfully challenging an entrenched bureaucratic elite, may serve as the prologue for the coming conflicts over spending priorities – in health care as the COVID pandemic becomes endemic, in public education, where the mismanaged state takeover of Providence schools has resulted in an exodus of teachers to other jobs outside the district, and in the failure by the state to address urgent climate change threats.

• The McKee administration had quietly moved to cut funding for more than $2 million to recovery and medication assisted treatment programs beginning Oct. 1, only to be forced to rescind those cuts after recovery advocates walked out of the Governor’s Task Force on Overdose Prevention and Intervention meeting on Sept. 8. [See links to ConvergenceRI stories below, “How the good guys and gals won,” “BHDDH cuts more than $2 million in funding for recovery programs,” and “Hard of hearing: BHDDH’s Charest and Gov. McKee appear to be tone deaf.”]

Now, with level funding restored and promises made about more transparency around future funding decisions, leaders of the recovery community’s revolt told ConvergenceRI that the “temperature” has changed for the better. And, with $1 million in future funding for Narcan secured through R.I. Attorney General Peter Neronha’s office, the emphasis seems to be back on saving lives rather than saving dollars.

One sign that good will has been restored was the ceremonial signing that occurred at the State House on Friday, Sept. 24, for four new laws enacted by the R.I. General Assembly, including legislation to enable the state to explore establishing harm reduction centers to help prevent drug overdoses.

“If we are truly going to rein in the drug overdose epidemic, we must recognize drug addiction as the health problem it is, rather than merely a crime,” said State Senator Joshua Miller, who sponsored the legislation and who serves as chair of the Senate Committee on Health and Human Services. “Having a place where someone can save them from an overdose and where there are people offering them the resources they need for treatment is a much better alternative to people dying alone in their homes or their cars,” Miller continued, explaining the benefits of such centers, also known as safe injection sites.

New skirmish lines
Many of the systemic problems around funding and low reimbursements have not gone away. The Substance Use Mental Health Leadership Council is now taking the lead in addressing the broken treatment centers and recovery support landscape in Rhode Island, meeting with R.I. BHDDH and the R.I. Department of Health officials, focused on workforce retention and reimbursement issues – the low reimbursement rates from insurers and managed care organizations have made it difficult to maintain a stable workforce..

One question for Gov. McKee: Would the Governor be willing to mobilize the National Guard to deal with the severe lack of behavioral health care workers, as was done during the initial stages of the coronavirus pandemic with testing and vaccines?

The once and future largesse
In the next week, the U.S. Congress will debate and seek to pass: a short-term spending bill as a continuing resolution in order to avoid a government shutdown at the end of the government’s fiscal year on Sept. 30; a $3.5 trillion package of social safety net and climate programs; and a separate $1 trillion measure financing infrastructure investments, authorizing investments in highways and enhanced broadband connectivity

At the same time, the nation’s health care delivery system continues to unravel, as hospitals across the country attempt to cope with the continuing coronavirus pandemic, which has been triggered in large part by political resistance to vaccine and masking mandates, led by Republican governors in Florida, in Texas, and in Georgia, among others It is the unvaccinated patients who are falling sick and clogging up the hospitals, according to the data.

The level of misinformation about vaccines and masks continues to spread across social media platforms – and even on talk radio shows in Rhode Island.

To read this article in its entirety, go to:

To read more articles from ConvergenceRI, printed in RINewsToday, go to: