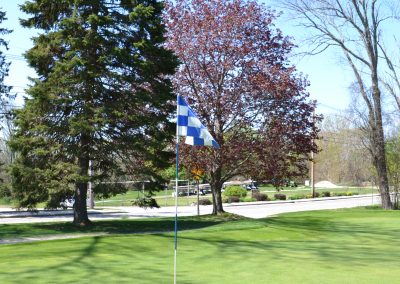 Like all golf courses built in the early 1900’s, the West Warwick Country Club is no different. Built on family farmland and opened in 1929, West Warwick was built by land owners, the Quinn family, (who still own the course) wanted to take advantage of the surging popularity of the game of golf that was led by the young Bobby Jones and Walter Hagen. Promoted at the time as giving you a good golf experience while challenging your skills.

Before heading out to play West Warwick, I was warned that it was a “long course”. Teeing off from the blue tees you have a 3,001 lay out in front of you. There are two par 3’s, six par 4’s and one par 5 that is the ninth and final hole on the course. A 68.4 rating and 131 slope, I went in expecting a nine-hole nightmare and I must say that thought process was not going to go away soon.

It began when I arrived with my group about a half hour before our 9 am tee time. I found out that the members usually have all the early morning tee times booked and all non-members get to play the course after 2:00 pm, but somehow, we were able to secure an early tee time. As our 9am tee time approached and members were showing up to play (even to the point where someone teed up and shot), the attendant had not arrived yet to open the course. I informed the golfer who hit that we had a nine o’clock tee time, that is when the attendant showed up and open the course. After he arrived, and then had to open the check-in window, and pull the carts out to get them ready, our 9 o’clock tee time turned into a 9:20 tee off. The attendant turned out to be a pleasant and attentive young man.

Hole #1 is a 419-yard par 4; it is also the number handicap hole on the course. Trees line both sides of the fairway but it’s spacious. The fairway declines and bends slightly to the right before rising slightly to the green. The use of sand traps virtually on each hole are placed in areas that you may want to use as landing spots. Overshoot the green and you could find yourself in some bushes and roughage.

I pulled my drive to the left and hit a tree which helped my ball land in the fairway, my 2nd shot was a worm burning 3 wood that ended up on the right side in front of the hole, and a pitch and two putts later, and I scored a bogey 5. Hole #2 was a 338-yard par 4, the tee box is elevated with bushes in front of the box and trees lined up on each side of the fairway. A small creek runs across the fair way at the 130-yard mark. Given the choice of laying up or going for it, I chose the layup. Deciding on leaving my driver in my bag (all day! We have not been getting along lately), my tee shot landed about 50 yards short of the creek, and I undershot the green with my 7 iron. Being below the hole (there is a slight elevation), I pitched up and three putted for a double bogey 6.

Hole # 3 is a 140-yard elevated par 3 with out of bounds to the left. The wind was blowing toward the tee box as a storm was predicted and approaching, my tee shot fell short but landed about 20 yards in front of the green. A good pitch and a short putt, I recorded my first par of the day

The last hole on the west side of the course is Hole # 4. It is a 375-yard par 4. There is a tree in the center fairway which makes you choose to go to either side or over, I went to the right and carried the ball to the right side staying on the fairway, but still had aways to go to get to the green. My second shot was a solid fairway 3-wood that left me on the fairway to the left. I pitched, went long ,but stayed on the green and two putts later I had another bogey 5 and onto the next five holes, but we had to cross the street to get there.

Hole #5 is a 364-yard straight par 4, two good 3 wood shot and a pitching wedge onto the green again I two putted a straight shot into the cup! Aww! Putting my own little 2020 crisis. Another bogey 5 on the card. Hole #6 is a 360- yard par 4, I was able to be on the green in two shots, my putt fell about 3 inches short of a birdie, and I was happy to walk away with my second par on the round.

The last three holes where on the eastern side of the course, Hole #7 is a 333-yard par four. Topping my drive and pulling it to the left I found my second shot to be under a low hanging tree branch. Deciding to “punch” my ball back onto the fairway, I gave up distance for precision. Two shots later I was on the back of the green and looking at a big number. Lying 5 and with a 15-foot putt ahead of me I was thinking go for it, what else could go wrong? As I hit the ball it was rolling straight and I thought that I seriously misread the putt, but then it took a right hand turn and found the bottom of the cup for a double bogey 6, which felt like I just putted for an eagle!

Hole #8 is a 162-yard par three with a creek, some bushes and sand traps all around it. My tee shot cleared everything but fell short of the green. My pitch was a little strong and barely stayed on the back of the green. A touchy downhill putt and a back of the cup straight back up hill gave me a bogey 4. The final hole is Hole #9, a 509-yard straight out, wide open fairway, hitting my 3-wood three times I was off to the back left of the green and pitch and two putts later I was out with another bogey 6 and finished the day with one of my best rounds of the year 44.

The course was in great shape and is very well maintained, the fairways are wide in most cases and forgiving if you can manage to be somewhat straight or on target. Trees, as on most courses, are lined up to protect the golfers on other fairways and hazards and sand traps are in places that make you really think how your next shot will go. A poor decision will punish and a good shot on a gamble will reward.

I will give West Warwick Country Club a solid “A”. In spite of the start of the course , it really showed itself to be a nice challenge, plus I played it well, so it did leave with a good taste in my mouth. Again, it is a semi-private course that is open to the public after a certain time. Tee times are a must! The course is located at 335 Wakefield Street, West Warwick R.I. and you can call at 401-821-9789.