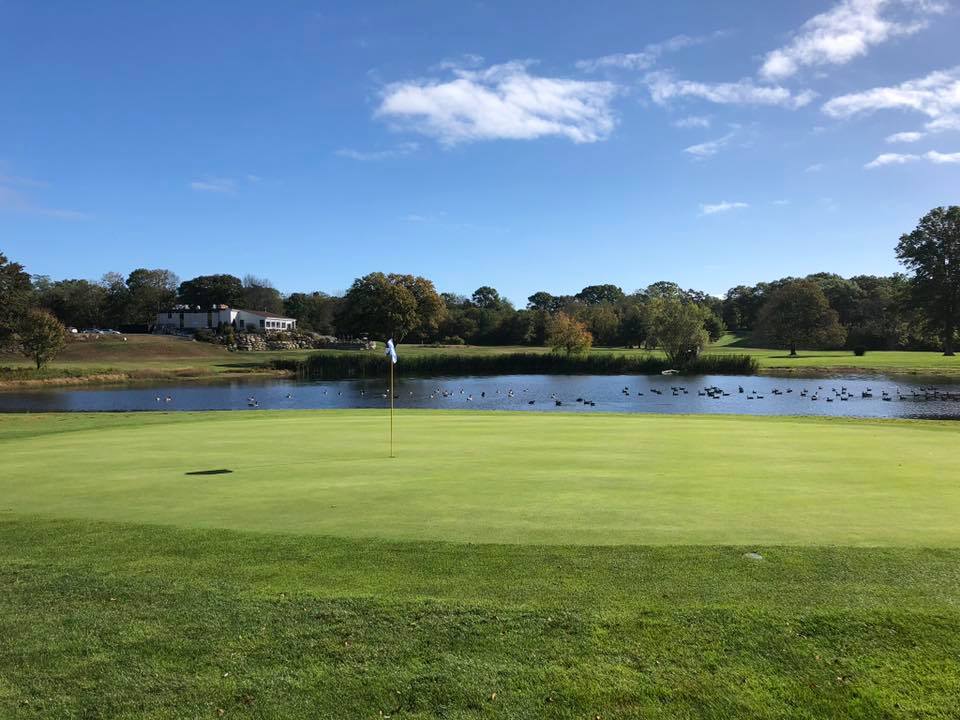 This will be a multi-part series on local golf courses in the State of Rhode Island by yours truly, a self-admitted weekend golfer who is more of a hacker and duffer than the pros we watch on Sunday afternoon and wish that we could play like them. The courses are selected randomly and played without prior knowledge of the owners and staff, so to get the experience of every golfer who plays the course.

East Greenwich Country Club is a 9-hole gem tucked between West Warwick, Warwick, and East Greenwich, at 1646 Division. It is a par 35, 3,315 yards, blue grass with a 127-slope and a 35.4 rating that was designed by Michael Kroian and opened in 1964. The area in 1964 was much different than it is today; back then, the course was surrounded by farmhouses and back roads. Most play was to the local players or to those who would travel all the way on Route 2 to the Division Road intersection.

Golf in the 1960s was just beginning to catch the wave that was led by professionals such Jack Nicklaus, Arnold Palmer and Gary Player, and the sport was considered for those who were “well to do”. My, how times have changed!

Development in the area exploded, with route 95 and 4 opening in the early 1970s, East Greenwich is now a few minutes from Providence and the golf course is accessible to virtually everyone. Those who make the trek to the course find that the game of golf isn’t exclusively for the well to do anymore. The game has evolved as a truly diverse sport for the young and old, men and women, and those of every race. Golf speaks volumes that everyone can come out and have a nice walk ruined!

As we approached the starter, we were greeted by a friendly man named Mike Cornicelli who was squarely in charge but very accommodating to a group that on a Sunday morning in June, didn’t set a tee time to play. Which normally could be a problem at most golf courses especially on a weekend morning, but Cornicelli, who was a friendly, engaging and entertaining man, did not flinch, he put us in line like an airport runway controller with planes waiting to take off. We found ourselves on the first tee within a few minutes.

I noticed as I teed up my ball on hole number one, the course which I had played several times before was in remarkable shape. Their patchy fairways were nicely groomed and full and plush. The first hole was straight with a very slight left green placement. Opting to play from the white tees (I am not a big hitter), I was on the green in two, but two putted for a par. The green was well manicured and tight, making the putting surface fast, and if you were heavy handed you could find yourself in trouble quickly.

Throughout the course all the greens on every hole were the same way, tight, fast, and well groomed. Pin placements were all over the greens which when you reached the green, reading the little slopes and crannies could be the difference to knocking one into the hole or just missing and with the speed of the greens you could have a challenging 2nd or 3rd putt to hole out.

The first five holes at East Greenwich have four par 4’s and a single par 5. The 2nd hole is also is a par 4. You need to hit off the tee straight (avoiding a small creek that runs across the fairway), to a dog leg right elevated green. Most would take the chance to “cut the corner” and go for the birdie, the reward for the risk, but you can also come away with a seriously high score on that hole, like one member in my group discovered by posting a score of 7 – Ouch!

The 3rd hole is a wide-open par 5 that you tee off from an elevated tee box. For a golfer such as myself my 2nd shot was going to be a lay up because of another creek that ran about 100 yards before the hole across the fairway. The large green had elevations and slants that make putting a real challenge. Holes 4 & 5 were both par 4s which were pretty much straight with little hazards. A stream separates the two holes and could come into play with any wayward shots, and sand traps surround each hole that could come into play on a poor decision. The fairway approach on hole 5 has a water hazard about 80 yards from the hole which again makes the golfer choose between a lay up or a gamble. On the left side of the green on hole 5, the ground crew is appearing to be putting a sand trap which appeared to be still in development and under construction.

As we headed to the first par three on the course, hole number 6 was a 125-yard straight hole with a low front to the green and a high back. Trouble can be found to the left as the green slanted downhill, away from the pin. For me, a rare straight shot that landed on the green left me with a 20-foot birdie attempt, but settling for a par, we moved to the second par 5 hole on the course hole #7. Teeing up I could not help but notice that the pond that was in front of hole #5 was in play to the right of the fairway on hole #7. I chose to stay to the left and found an over-hanging branch on the only tree on the left side, this began the downside of my round as I posted a respectable 7 as I holed out.

Hole 7 is straight as you pass the water hazard and although the hole is placed on the left side of the fairway, it is protected by sand traps around the hole and trees to the left. When you do get on the green the hole was placed where you had to putt uphill from the front and downhill from the back and on each side (which I was hitting from). Your choice was to hit above the hole and hope that gravity would be kind; it wasn’t for my group mates!

The par 4 8th hole is the course’s signature hole (each course has one), it is a 380-yard hole that could be a nightmare if not played correctly. Teeing off you want your ball to land near the pond as you attempt to hit your drive about 280 yards. The hole itself is protected by a 100-yard pond, which looks larger than it is. The average golfer tends to over club and swing harder, which was the case for me. Pulling the ball left of the hole I holed out with my second 7 on my card as I headed to the final hole.

The 9th hole at East Greenwich is a par 3, 175-yard hole that is elevated, surrounded by sand bunkers and the green runs the gambit of multi levels of plateaus, small hills behind the green and a downward slope in front, depending where your tee shot landed your next shot weather it was putt or a pitch, if not done right could mean the difference of a good round or a poor round. Duffing the tee shot I landed about 100 yards away from the hole on the flat surface below the hole, but in the fairway. Pitching up to the hole I pushed my shot to the right on the collar but hole high. I holed out with a bogey 4 after a tricky putt and recorded a respectable 46 for the day.

After the round when speaking again with Cornicelli about the improvements to the course since last year. He said that “New England Tech purchased the course and instead of expanding their campus or parking area, they decided to keep it as a public venue. People love playing here and with the improvements that have been made to the overall condition of the course and the planned changes that are on the drawing board, East Greenwich Country Club should be one of the State’s premier 9-hole golf courses.”

I agree with Mike, the course is not too intimidating, but it is challenging, to navigate each hole you must think and come up with a strategy that fits with your game. The rewards on gambles can be fruitful but they can also punish you. There are the usual hazards with trees, sand traps and water that will also make you think as you play the course.

I noticed that on a busy Sunday morning the play of all the golfers were fluid with little to no waiting to keep play moving along. The staff was friendly and accommodating and in this Covid-19 era, safety measures were in place and enforced. The restaurant Circe (who with Cornicelli manages the course and dining facility) had just opened for the day when we were finished playing. They had a nice lunch selection and although we were unable to enter the clubhouse to eat in the dining room which opens at 4:00 pm, we were served on the outside patio.

I will give East Greenwich Country Club an “A” rating, the improvements from last fall were impressive, the staff was excellent, the food was good, and the golf experience was nice with enough challenges to keep you on your toes and focused. I highly recommend a round or two this season at East Greenwich Country Club. Tee times are recommended by calling 401-234-9836 but walk ups are welcomed.