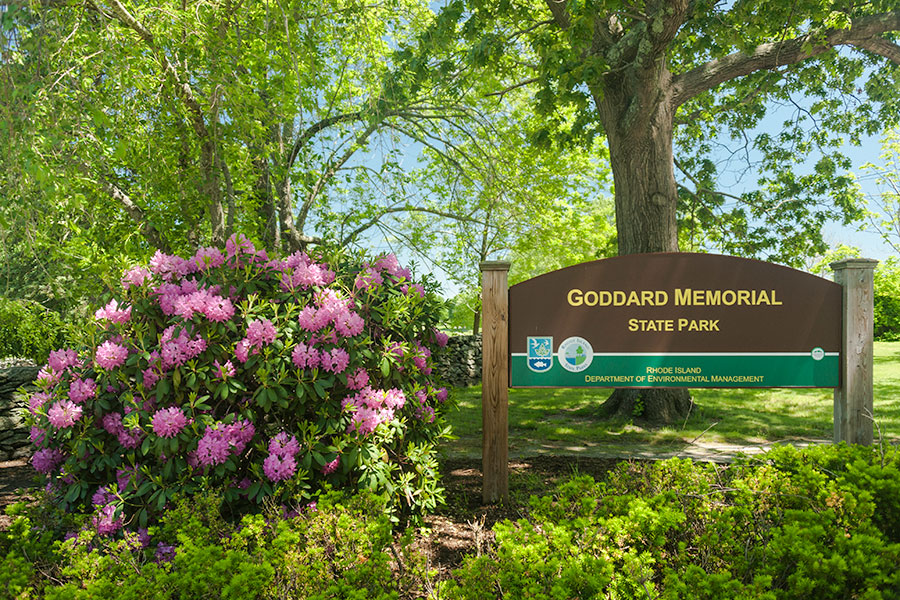 This is the 4th part of a multi-part series on the local golf courses in the State of Rhode Island by a self-admitted weekend golfer who is more of a hacker and duffer. The courses are selected randomly and played without prior knowledge of the owners and staff, so to get the experience of every golfer who plays the course.

This week’s golf adventure brought us to the Goddard State Park Golf Course, a 9-hole adventure located in East Greenwich, Rhode Island. It is owned and maintained by the state of Rhode Island.

I haven’t played Goddard Park in over ten years; the last time I played the course it was a wide open, poorly maintained dried out piece of land that was labeled a golf course. The key word here is “was”.

This round was played on a day that had seen rain showers move through the area for 5 straight days. That left the course in exceptionally good shape, from the tee box to the putting greens the course was lush and green with no dried out or burnt out areas to contend with. So far so good!

As a course policy right now, they only take tee times two days in advance. Approaching the window to pay the green fees, which at the cost of $15 if you walked, was very reasonable. As with every golf course that my group has played this season, the COVID-19 precautions were in place and strictly enforced.

As my round proceeded, I noticed that the holes were straight, except for the 6th hole, which had a dogleg left bend to it. The fairways were wide with little objects or obstructions in your way. Basically, if you hit the ball pretty straight your round will be adventure free, and for the most part that’s how I played off the tee. Approaching the green was where my game toughened up.

Goddard Park starts you off with a 500-yard par 5, and it is the 2nd rated most difficult hole on the course. A straight direction off the tee, you encounter a sand trap in front of the green. Once on the green we discovered that putting was going to be slow, mainly because of the rain that we had all week, and the groundskeepers didn’t have the chance to mow the putting surface (they were actually mowing the fairways as we played). Taking a bogey 6 we moved to the next hole.

Hole #2 was a 370-yard par 4, both sides of the fairway were lined with trees that were not a factor, in fact you really had to mis-hit your ball to get into real trouble throughout the round. Two sand traps protect the green and I got caught in on my approach shot. Most of the sand traps on the course were high toward the green so to get out of the trap, you need to blast it out. Three putts later, and a double bogey 6 it was on to the third hole.

The third hole is the first par 3 on the course, a 175-yard straight green with two sand traps on each side of the green in front. As the wind was blowing in our face, even going with a little more club got knocked down and landed just in front of a sand trap. Not to repeat the last hole and landing in the trap, I gave it a little more club than I should and landed just off the green behind the hole. My first effort with the putter fell short (did I mention that the greens were running slow?) I took a one over bogey 4. The next hole was a par 4 288 yard straight to the green cruise. As with the first three previous holes, trees lined both side of the fairways and sand traps protected the green. Getting on the green in 3, I knock my long putt in for my first par of the day, and things were looking up!

That feeling was short-lived after the next hole, which was the second par 5 on the course. It is a 495-yard uneventful hole with traps right and left of the green. I wasn’t able to take advantage of a good tee shot, flubbing my next shot, and putting my third shot into the right side trap, fortunately my ball landed on the up slope of the trap and I was able to get on the green and take my 2nd double bogey of the day. At this point I was six over with three holes left to play. My third double bogey occurred on the 6th hole which had a dogleg left, pulling my tee shot left I caught the right side of the tree that was positioned at the bend. I got a favorable bounce toward the fairway, but I had to contend with several over hanging branches. Punching out longer and more to the right of the green than I wanted, the hole was surrounded by what else? You guessed it, sand traps! All were higher toward the green, my high, 50-yard pitch went long, and I walked off the hole with my third, second in a row double bogey.

Hole #7 was a 165-yard par 3 which again I misjudged the wind, and my tee shot fell short, a pitch onto the green, and two putts later I was off with a bogey and onto hole #8. Hole #8 is rated the hardest hole on the course. It is a 385-yard par 4, it has 3 traps that surround the hole; the tee box is slightly elevated as is the green, and again you think that it is uneventful but recording a double bogey 6 makes you shake your head as you walk off the green. As with every other hole except for hole #6, the final 9th hole brings you back to the starter shack. A 315-yard par 4, wide open to each side of the fairway with a small single sand trap on the right side of the green, recording a bogey 5 and a score of 48 for the round, I was perplexed that a rather straight forward layout gave me fits all day. But I believe that is the secrete of Goddard Park Golf Course, it lures you into a false sense of simplicity, and then bites you.

I am giving the course a B+, it is now in good shape, but let’s see if it will be maintained throughout the dog days of August. There is no water on the course as hazards, so irrigation and a water source can cause problems as the course dries out. Keep in mind that it is a state-owned facility and may not get the TLC as most golf courses – but only time will tell. It is an excellent course for everyone, from the experienced golfer who wants to work a round to the beginner who wants to get out and work on their game.