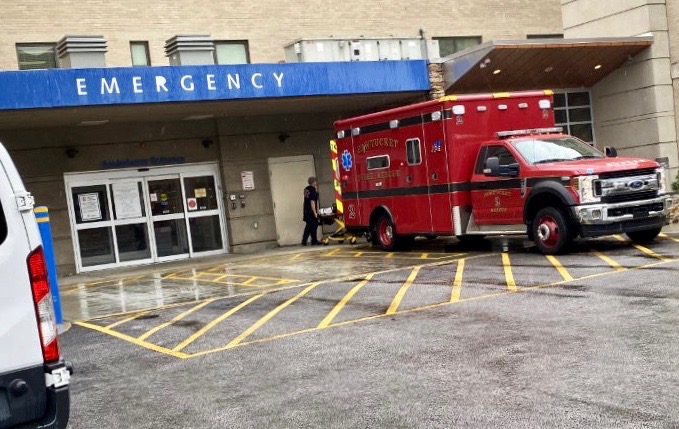 We travel the spaceways, from crisis to crisis – by Richard Asinof

Photo: The diversion of ambulances from Landmark Medical Center in Woonsocket and Kent Hospital in Warwick has become “situation normal” at the Emergency Room at Miriam Hospital, according to nurses there, causing three-hour-long delays in patients being seen.

How do we choose to be participants, not passive observers, in fighting back against the trauma Rhode Island and the U.S. are enduring?

There are no reporters, no microphones, and no cameras converging on the emergency room at The Miriam Hospital on Monday evening, August 10, at 9:15 p.m. It is just another quiet summer city evening during a heat wave in the midst of the coronavirus pandemic.

The heavy humid air absorbed much of the distant hum of air conditioners; it blanketed much of the urgent, unreported world we co-inhabit with a deadly virus; it smothered, for the moment, the growing sense of dread. The refrain of the barely audible crickets seems to repeat, again and again, the phrase: We don’t want to know. We don’t want to know.

There was no breaking news story to be found here, only the constancy of life-and-death rituals of daily health care interventions, brutal skirmishes on the front lines of life in a time of pandemic. For many, the stories about heroic front-line workers have now faded from public consciousness into a remote land in a galaxy far away on the distant planet of media indifference. We don’t want to hear about it.

“It is what it is,” said the President, dismissing the ever-increasing numbers of deaths in the U.S., which had reached more than 160,000 on Aug. 10, and would soon to reach 172,630 by Sunday at the end of the week. There is a sense of numbness in reporting on the numbers, much like the death counts from Vietnam, displayed in colorful charts. If we ignore it, perhaps it will simply disappear.

Waiting for the doctor
There was a three-hour wait to been seen at The Miriam Hospital, because ambulances were being diverted from Landmark Medical Center in Woonsocket and Kent Hospital in Warwick, both a long way away from Providence.

Diversion had been a big news story after Memorial Hospital in Pawtucket closed in 2018, but now, almost three years later, it had evolved into a “situation normal,” according to a nurse on duty on the overnight shift in the ER at Miriam Hospital. She explained that the diversion of ambulances from other hospitals had become a regular occurrence, an expected happenstance of the job; she apologized for the lengthy three-hour delay. Why were ambulances still being diverted?

The waiting room had been filled with patients, placed in socially distant positioning, many with urgent conditions like myself: a middle-aged man, bleeding from the back of the head after a fall, having suffered a possible concussion, who arrived holding a dish towel to staunch the bleeding. A nurse cleaned the wound, wrapped my head in gauze, and pushed me in a wheelchair back to the waiting room, to wait. The passage of time is marked by a shift change at 11 p.m. of nurses, nurse’s aides, and security guards.

It took until 12:15 a.m., three hours after my arrival, before I was finally pushed out of the waiting room, into an aisle, put on a gurney, only to have to wait again to be ushered into an exam room, and then wait further to actually be seen by a physician.

In the waiting room, another middle-aged man, groaning from excruciating pain, in a wheelchair, suffering from chronic heart problems with a history of high blood pressure, shared his story with a third middle-aged man. After waiting for two and a half hours and not having been seen, the man in the wheelchair announced that the was leaving, with plans to go instead to Rhode Island Hospital, in hopes of being seen sooner. [I too had been tempted to leave myself, frustrated by the lack of care.]

I walked out of the emergency room at 3 a.m., six hours after I had arrived, with six staples in the back of my head. I can’t wait for the medical bill to arrive for my care.

The waiting room of life
The lack of prompt attention for patients in a local emergency room, by itself, is a frequent untold story, a recurring nightmare for those who are humbled by the experience of needing to seek medical care. But it also serves as an apt metaphor for the current story of our lives. We are all living in the waiting room, waiting.

And, the news media, with its penchant for drama and breaking news, often misses covering many of these stories – or the story goes unreported. Like a fish kill in Narragansett Bay, until the stench apparently reaches TV headquarters in East Providence and activates the sense of smell of a news reporter.

• “Waiting” is about the difficulty for common folk to gain access to testing for the coronavirus and the inability to receive prompt test results.

In places like Central Falls, in the West End of Providence, and Olneyville, access to testing, particularly for children, has often proven to be a difficult barrier to overcome. [See link below to ConvergenceRI story, “A pediatrician takes on COVID in Central Falls.”]

• “Waiting” is about anxious parents trying to make plans around school reopening plans in Rhode Island, despite reassurances from the Governor and her team that safety, public health and science will drive their decision-making.

Following her Facebook forum with Dr. Anthony Fauci, Gov. Raimondo wrote that she has tried to follow two principles: “Focus on facts not frenzy, and listen to the experts. Every decision we’ve made in response to this pandemic has been guided by science, data, and the advice of public health experts.”

The problem, as was deftly illustrated by Jeremy Giller, a parent, in a series of detailed tweets around air quality in schools, sent out on Monday, Aug. 10, exposed how the lack of proper ventilation in schools should be a major concern – despite the Governor’s promise that science and data would rule her decision-making.

Translated, if you can’t open any of the windows in a school building to ensure proper airflow in a classroom, children and teachers and workers will continue to be at high risk of being infected by the virus and spreading it. Oops, she did it again.

One more note from the Facebook forum with Dr. Fauci: “This will end,” he said. “We’re going to be looking back a year from now celebrating how we got through this together.”

Such blatant optimism is no doubt encouraging, particularly at a time when President Trump and his Postmaster General have declared war on the U.S. Postal Service, ripping out mail boxes in Montana, removing high speed mail sorters and slowing down mail delivery, all in a calculated effort to save Trump’s failing re-election campaign.

“Celebrating” may be poor word choice, a positive reframe, about the trauma we are all enduring as a nation. As a point of reference, check out the tweet thread from Bess Kalb, @Bessbell, on Saturday, Aug. 15, which began: My child turns 1 this month which means it has been almost a full year since I whispered: “I’m going to murder your family” to a covering doctor who told me to “really push.”

There have been some 473 responses, mostly moms, who have weighed in with similar stories and emotional tales. Those of us who survive the COVID-19 pandemic may view the experience “differently” than Dr. Fauci projects that we will.

Here’s an important story, with political and state budget implications:

When asked by ConvergenceRI if it seemed like a bad time to making unilateral cuts to Medicaid reimbursements, a community health advocate responded by saying: “You think?” followed by more than a dozen exclamation points.

Here’s another important story that requires more follow-up by the news media in Rhode Island:

• “The human services workforce is composed of over 17,000 Rhode Islanders who both work and live within the Ocean State, who have contributed an estimated $63 million in state and local taxes in 2018,” according to the executive summary of a new report by the Hassenfeld Institute for Public Leadership in partnership with the Rhode Island Coalition for Children and Families.

Further, the executive summary said: “Despite its significant diversity, the human services workforce also experiences challenges such as gender and racial pay disparities and occupational segregation, as does the workforce in general. The human services workforce takes care of those who are most vulnerable: those with disabilities, special health care needs, behavioral health needs, children, and those in need of assistance. This vital workforce has a direct and positive effect on the overall well-being of Rhode Island.”

Translated, as the Republican leadership in Congress and President Trump refuses to act on legislation passed by the U.S. House in May, more than three months ago, states and municipalities are also being put in the waiting room, hoping that a new stimulus package will be enacted to stave off massive budget cuts at the state and local level.

Those likely to bear the brunt of such cuts are the human services workforce, doing the essential tasks required by our service economy.