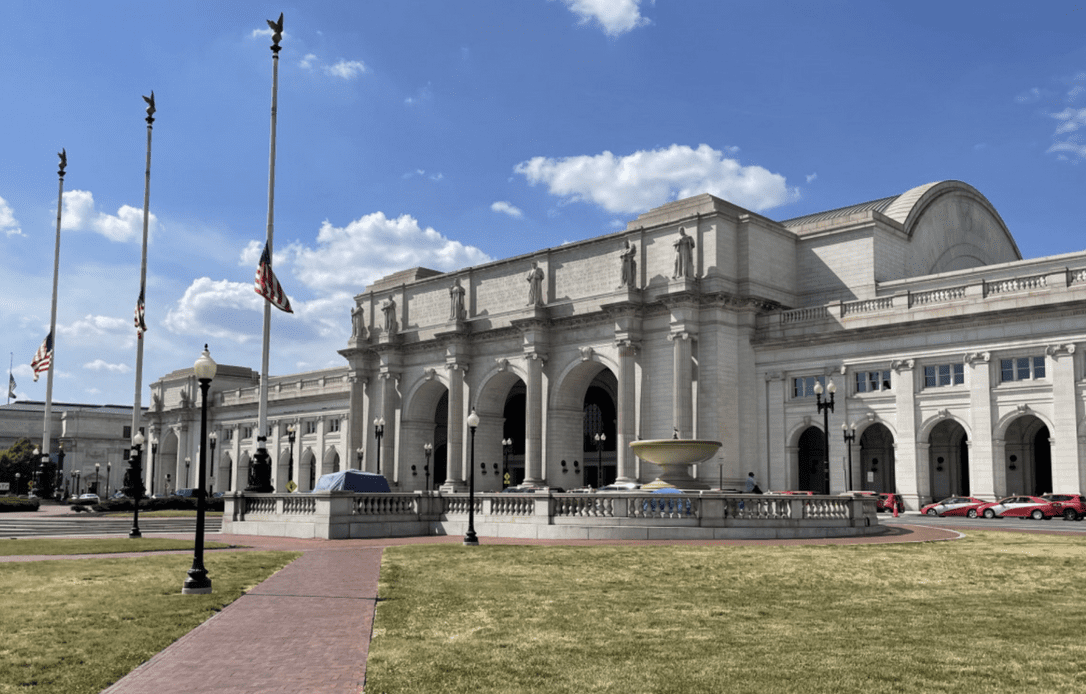 Union Station, completed in 1907 near the U.S. Capitol in Washington, D.C. (ggwash.org.)

Last week the U.S. Commission of Fine Arts and the Federal Railroad Administration released images of a planned expansion of Washington’s Union Station, which sits just east of the U.S. Capitol grounds. The Beaux Arts station was designed by Chicago architect Daniel Burnham – of “Make no small plans” and 1893 World’s Columbian Exposition fame – and opened in 1907.

The expansion, in the works for at least a decade and still far from breaking ground, would add an expanded train hall and bus depot to the station’s rear, but would not obscure views of the original station from the Capitol complex. Its plaza out front, along with Columbus Circle, would be upgraded and made more friendly to pedestrians. Ultimately, a mixed-use development known as Burnham Place would reach eastward from the station’s addition toward the neighborhood beyond H Street, N.E.

It goes without saying that the architecture imagined by the railway bureaucracy is atrocious, but it would face to the rear of the iconic station. That would preserve customary views of the station from near the Capitol – even if the height of towers proposed for Burnham Place beyond the rear of the station might eventually mar the prospect from that angle.

(No architectural firm has been mentioned in any of the dozen or so articles I’ve read on the project, but at the bottom of a Vimeo video of the project the word Grimshaw appears. Grimshaw is a British firm that does work of this sort, and it may be be responsible (or to blame) for the project’s pre-design-phase imagery.)

So it is tempting to conclude that, all things considered, Union Station, with its original façade unimpaired, is adequately preserved under the renovation plan.

That, however, would be like saying it’s all right that the view, in Paris, up the Champs Élyssés and through the Arc de Triomphe is adequately preserved today because the abominable La Défense development can only be seen in the distance beyond the Périphérique (Paris’s ring road), or, to take a local example, that it’s all right for the Providence Preservation Society to build a modernist glass-and-steel addition on the rear of its headquarters.

No, it will not do. The buggery of Union Station may take place someday, and its expansion may prove less offensive than it could have been if it had been applied to the front or side. Yet if these offenses do not raise any complaint or objection, then the malign forces that are responsible for them will continue to assume that these offenses are not widely considered offensive at all.

Each preservation organization has a duty to complain, at least, and, further, to do as much as it can to protect beauty. That is its job, and it is precisely because so many preservation organizations misunderstand the duties entailed by their jobs that our cities and towns – and the world’s great cities – watch in horror as their beautiful historic quadrants fall prey, increasingly, to ugliness.

I have neither seen or heard from any preservation organization in the District of Columbia expressing dismay at the plan. Hopefully, someone will correct my oversight. Certainly the U.S. Commission on Fine Arts has not appeared to make any aesthetic objections thus far. Tsk tsk! It may correct its laxity, but probably not, since the commission has been neutered by the Biden administration.

So plans to expand Washington’s Union Station must stand condemned. A chorus of boos may, perhaps, change the course of planners intent on inflicting havoc on the Federal City. Even if it does not, planners in D.C. and elsewhere might, next time around, think again of what they are about.