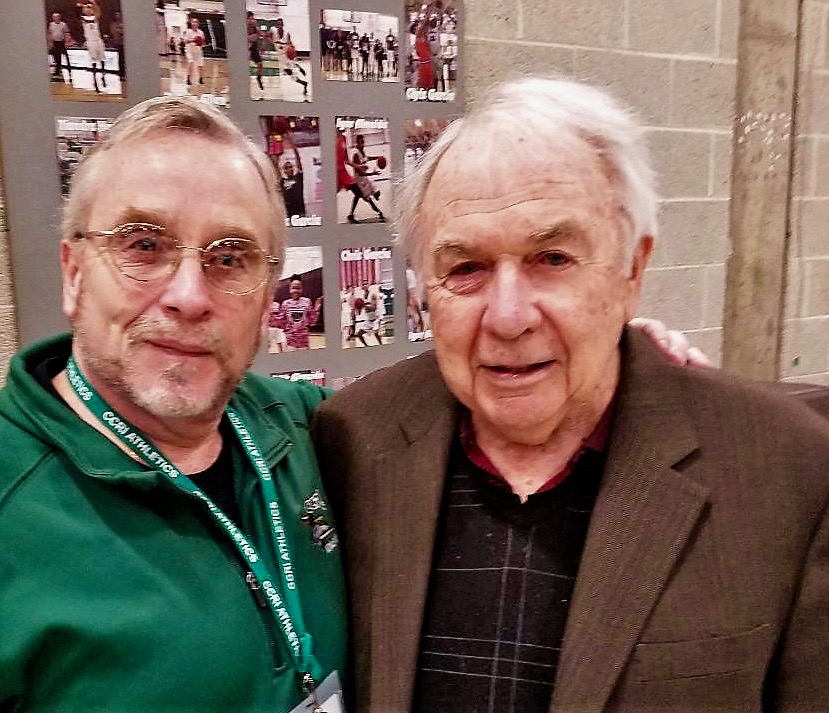 When I arrived at the location that we agreed upon to do this interview, it was apparent right from the start that this was going to be a story on someone very special on the Rhode Island Sports scene.

The building is the Vincent A. Cullen Field House located on the Warwick campus of the Community College of Rhode Island. As you enter the building and look around, you see the basketball courts that are in use either by student athletes or regular students playing pickup games to pass time between classes. You also see as you look on the walls of the building the banners that remind you of the success that both the women’s and men’s basketball teams have had since the school’s existence. You also notice that the featured wooden floor is shiny and buff, and no one plays on that floor but the men’s and women’s basketball teams that represent the school, in this building – the one that “Vinny built” is sacred territory.

I first met Coach Cullen in 1971 when the Principal at Park View Junior High School Joseph McAndrew introduced us. Being 13 at the time I had no knowledge of who he was or was I aware that at the time I was meeting a man that influenced the local college basketball landscape the way he had.

A few years later in 1974 when I was hired as an instructor for the City of Cranston’s Saturday Morning basketball program at Park View, I encountered Coach Cullen once again. He was the lead instructor at Cranston West. We would often face each other as competitors when the program used to have a city-wide basketball tournament at the end of the program. By this time, I was fully aware of who he was, while I watched and listened to Coach Cullen, I learned many things about coaching as I observed him back in those days, they were many of the same reasons that I became a coach myself.

Even back then I had no idea when you put together a Mount Rushmore of coaches in Rhode Island College basketball history, you will find Vin Cullen with Providence College’s Joe Mullaney, Dave Gavitt and URI’s Frank Keaney – all which Coach Cullen could easily have on speed dial, that is if they had speed dial back then. As a matter of fact, Coach Cullen could call any top coach in the country from UCLA’s John Wooden to North Carolina’s Dean Smith, from Maryland’s Lefty Drisell to Georgia Tech’s Bobby Cremins, coach Cullen knew them all!

“Back then it was a wonderful time to coach,” Coach Cullen said, “we would attend conferences and seminars together and got to know each other. Whether if you were from a large school with a major program or from a small two-year community college, you were part of the brotherhood of coaches.” Coach Cullen continued, “It wasn’t uncommon that coaches would share their knowledge of offensive or defensive schemes with each other. I would speak to Joe Mullaney of Providence College and pick his brain about his “Match-up zone defense”,  not only did he have me come to several practices to show me the workings of the defense, he also sent a couple of assistants to my practice to go over the defense with the team and my assistant coaches.”

Vin Cullen grew up at a time when the world was at war and the great depression was in full swing. Cullen played baseball and basketball as a youth in Cranston to keep his mind off world events. He was so good at basketball that when he attended Rhode Island College from 1951 to 1955, he played for the Anchormen. “I was the beneficiary of a lot of good things in my life, breaking the right way.”

Cullen became an assistant coach under Roland Blais from 1955 to 1956 at Central High School before joining the Coast Guard from 1956 to 1960. With a degree in mathematics, Cullen, after serving his time in the Coast Guard, was hired as a math teacher after a chance encounter with Joe McAndrew at Cranston’s Park View Junior High School in 1960. “At the time there was a serious shortage of Math teachers and McAndrew hired me on the spot.” Cullen said. Now married and beginning a family, Cullen began to apply and receive grants from the National Science Foundation. Cullen heard of a new school just starting up where they were looking for teachers and instructors, the year was 1964, and the school was Rhode Island Junior College. It was a 2-year school where students could prep for a four-year school or get into nursing and office administrative work. The college was located at the Henry Barnard School in the former Brown and Sharpe Mill building in Providence and shared an open space housing 150 students.

In 1965 Cullen was approached by an administrator and was told that several male students wanted to start a school basketball team. (word had gotten out that Cullen played and was a 1,000-point scorer and a former high school coach). So, with no gym, no equipment, no building for that matter, Vin Cullen was tapped to start and coach a men’s basketball team. “I really had no idea what I was doing.” Cullen said, “I reached out to any coach that would talk to me. Fortunately, Bill Baird of URI allowed me to come down and watch practices as did Joe Mullaney of Providence College. We had no gym to even practice in, but an arrangement was made for us to use the older Whipple Gym at Rhode Island College. There were no formal Junior College leagues for us to join, so we built our schedule up by playing Military teams and College freshman teams.” Being named as the college’s first athletic director in 1970 and holding that position until his retirement in 2002. It wasn’t long afterward that Cullen became instrumental in building Junior/Community college leagues through out the country. “I couldn’t have done it without Charlie Wilkes.” Wilkes join Cullen in 1967 as a trainer and assistant coach. “He knew basic first aid and knew how to tape ankles; I had no idea what to do in that area. He became a valuable member of the Athletic staff and a very good friend.”

Serving on several committees for many years, becoming a member of several of those on the Executive committee level often molding the direction the present-day community colleges are currently on today. Being inducted into several Hall of Fames and named coach or executive of the year (he was named the New England Coach of the Year 14 times in his 37-year career as the Coach of the Community College of Rhode Island (CCRI).  In his coaching career, Cullen retired in 2002 with 711 wins and 258 loses, 13 trips to the NJCAA tournament, 4 times in Division 1; 1 time in Division 2 and 8 times in Division 3.

As Coach Cullen said, “if you hang around long enough, they start naming things after you.” The gymnasium that CCRI played their homes games in was named the Vincent A. Cullen Field House in 2002. Rhode Island College, where he graduated from in 1955 named the varsity locker room after Coach Cullen, and Words Unlimited (the organization of Rhode Island sports media) re-named the small college achievement award, the Vin Cullen Small College Achievement Award.

In all, the highlights of Coach Cullen’s life are as an athlete, marrying his college sweetheart, raising 4 children, and a career as a teacher and athletic trailblazer, but in it was in 1986 that Coach Cullen was chosen by the National Association of Collegiate Directors of Athletics to serve as an ambassador at the Goodwill Games that were held in Moscow, Russia and in 1987, and when he was selected to serve as an assistant to the University Maryland’s legendary coach “Lefty” Driesell (who was once described as the John Wooden of the East), they coached the East Basketball team at the US Olympic Festival.

Vin Cullen is a true giant in the sport of college basketball, known and respected by colleges, opponents. He is a true Rhode Island icon. Coach Cullen not only coached and taught math at CCRI, he still teaches math at the college today. I wonder if any of his former players realize that “The Coach” did everything in his power to get them to the next level, not in basketball, but in life. How many were aware that they were being coached and taught by a true giant of the sport and that he stood at the same level as the college sports greatest coaches. By the way often there were times when Coach Driesell, Coach Pitino or Coach Billy Donovan picked up the phone themselves to seek advise from a wise coach and on the other end of the line answered Vin Cullen.