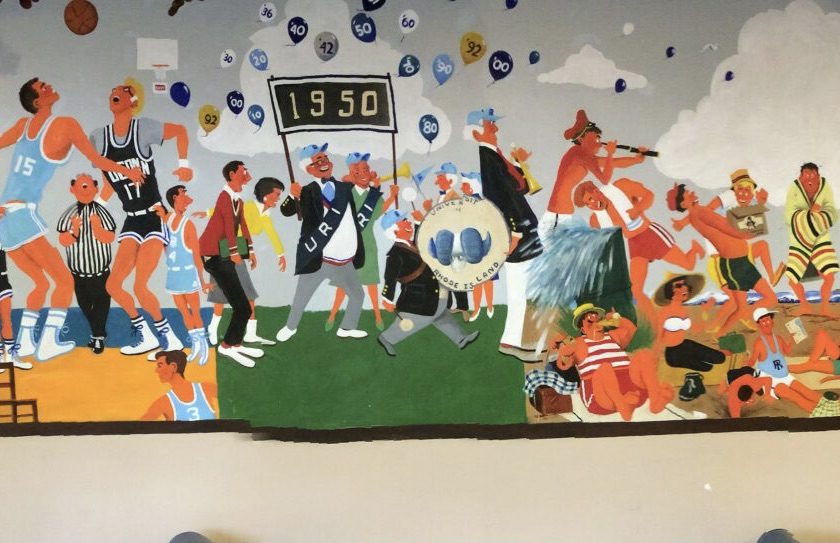 In an email sent to URI students, alums, and others by the URI office of Communications, URI’s Senior Leadership announced it will now “uncover and preserve the 1950s-era murals in the lower level of the Memorial Union”. The decision of the university includes providing written context to the murals as well as issuing an RFP for an additional art mural to be done reflecting “contemporary times” at URI.

This follows a tumultuous process over the last year that resulted in URI covering up the two whimsical murals painted by a student who later became an alum, honored athlete and professor as well as artist. Dr. Arthur Sherman, now in his mid-90s, painted the murals in the early 50s, to depict the return of students to continue their education after the war, and on the GI Bill. As the murals were being painted, students would stop by and make suggestions and changes which Sherman would often incorporate. The murals stood for nearly 70 years without controversy, until, in 2020, comments were said to be received that the men and women in the mural did not depict men and women of today at URI.

That’s when the controversy exploded. URI announced it would take down the murals. Then groups of individuals stepped into the discussion, often led by Rhode Island veterans who talked about URI’s history as a land grant college and how it owed its very existence to the GI Bill funding which brought students to campus who would not have been able to afford to continue their education after serving in the war.

At that point, URI came to a decision to cover the murals in thick, dark blue URI logo banners. The custom made banners had heavy duty screws set over the art every few inches so not a glimpse of mural could be seen.

Starting in 2020 and continuing throughout 2021 considerable public outcry about the murals took place, led by local RI veterans’ groups and some art groups as well. URI formed a committee to consider what to do about the murals. They made at least 12 times, virtually. While agendas were kept, no minutes or records of the meetings were taken, according to URI’s legal counsel.

The artist’s family let it be known that the mural was history. Pam Sherman said the murals were “an important piece of history” and should be kept and protected, noting that the “Student Union” was actually partially built by returning veterans when the union was nothing but 3 Quonset Huts, and that the original dedication of the building was as the War Memorial Union, dedicated to URI’s fallen World War II and Korean War soldiers.

Sherman had periodically over nearly 70 years touched up and repaired any problems with the murals, on his own. Today that area of the union building is still where ROTC and information on military programs and services resides.

Veterans were vocal in seeing the murals preserved:

Veterans came forward to advocate for the importance of remembering our history, the importance of the GI Bill, and URI’s connection to this past relationship, which, as one veteran who called RINewsToday and did not want to be identified said, “they seem to have forgotten. Instead of using the murals as educable moments – which is their very mission – they allowed contemporary, polarizing issues – to come between what has stood for 70 years and the very students they serve”.

“Veterans are pleased on URI’s decision not to destroy the artwork created by a living veteran, and dedicated to veterans. History should not be destroyed, but passed down to future generations . ITAM looks forward to working with URI to preserve this artwork …..” In addition, ITAM will be returning ALL, estimated $800 of donations to SAVE THE URI MURAL; the fund was set up for a potential legal challenge.

A month ago, RINewsToday submitted a FOIA request to URI asking for answers to some questions because no information was forthcoming from the school to determine how this issue began. URI responded by taking the maximum extensions with which to respond, going almost 30 days, before responding.

Attached document Request 2 included detailed agendas for the meetings of the Mural Committee, with the notation that no minutes of any of the meetings were kept. (Note: Approximately 12 virtual meetings were held). The document sent to us also received several “blue” hyperlinks – which did not work.

After receiving the response which provided almost no new information, RINewsToday expressed to the attorney that this did not satisfy the transparency required by a public RI institution. No further response was received, other than to direct our complaints to the RI Attorney General’s office.

Notably, David Lavallee, Communications contact for URI called RINewsToday to apologize and accept responsibility for not responding to multiple emails and calls requesting information that necessitated the filing of the FOIA request – noting how busy he was with university issues such as multiple graduations. When asked when a decision would be made he indicated he did not know. A day later he was taped on a television interview about the decision and the URI statement, below, was released:

“The University’s Senior Leadership Team has decided to uncover and preserve the 1950s-era murals in the lower level of the Memorial Union, add language to provide context and information about the artist and the era during which the murals were painted and commission new art that would depict University life today.

Last summer, the University decided to cover the murals to protect them while discussions were held with the campus community and alumni about the future of the murals in the context of major renovations to the Memorial Union. They were painted by Dr. Arthur Sherman, URI class of 1950. The murals are whimsical cartoons that show students returning to the area at the Kingston (railroad) Station, a class reunion, URI commencement, a South County beach scene, students piled in a jalopy wearing letter sweaters and a marching band.

The University’s Senior Leadership Team reviewed the Advisory Committee’s recommendations and voted unanimously to accept all of them. Next steps will involve fundraising to accomplish the recommendations, including the cleaning and preservation of the existing murals. A new mural will be done as part of the major Memorial Union renovations slated to begin in 2022.

The University’s Senior Leadership Team’s recent action follows about six months of work by the eight-member Memorial Union Advisory Committee. Among the committee’s recommendations approved by the University leadership team are:

URI’s Senior Leadership Team thanked the committee for its dedicated work on the issue, including its successful strategy to receive public input and consider the multi-disciplinary perspectives of the committee members, gather opinions from current students, alumni and community members through a survey, and gather historical research on the murals and Dr. Sherman.

It also appreciates the patience of the University community, including Dr. Sherman and his family and our alumni members, which allowed the University to conduct a thorough assessment of the issue and to hear the numerous perspectives on Dr. Sherman’s work.

The committee began its work in January 2021 to address the 1954 Memorial Union murals created by Dr. Sherman and to make recommendations to the University about their future. Through late winter and spring, the committee met online about a dozen times and worked to establish a process by which historical perspectives, public outreach, and solicitation of various opinions could be accomplished by a late spring deadline.

These meetings included historical and contextual presentations on the murals and on other art works in public situations (both nearby and nationally) that have generated controversy and the solutions found by other educational and historical institutions to resolve those controversies.

The committee conducted an email survey to gauge public opinion. A little more than 86,000 individuals received the survey, including alumni, students, faculty, and staff. It generated more than 200 responses.  The committee also held discussions with the Sherman family, individual alumni, and the Student Senate, among others.

Every effort was made to hear and consider the various (and sometimes very different) reactions to the murals and to correct or clarify any misinformation on the murals or the process through which the committee was working. Considering all the input from these sources and other key examples of controversial or challenging public art works, the committee concluded that this was a unique opportunity to interpret the current murals, to support reflection of today’s diverse URI community, and to commission another, new expression of contemporary campus life.”

Demographics of URI, provided by university:

Faculty/Staff together identify as 16% non-white.

Stories by RINewsToday on the URI Art Mural controversy: