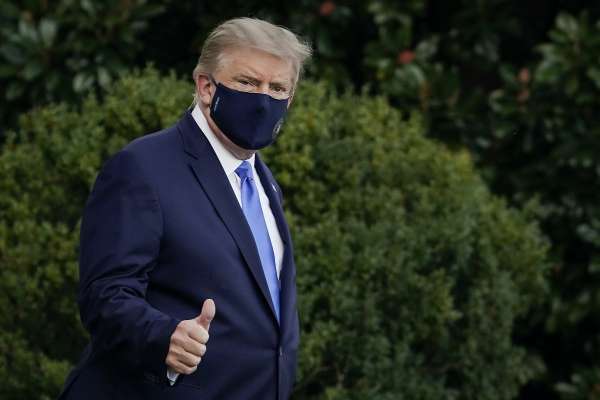 President Trump taken to Walter Reed Hospital around 6pm on Friday, 10/2, “as a precaution” “for several days”. 6pm, Friday. He taped this message to the American people just before he left…

At the hospital, a course of treatment was given with Remdesivir. This is given through IV infusion, in a hospital, and thought to be a primary resason for moving him from the White House.

Prior to being taken to the hospital President Trump was given a single 8 gram dose infusion of Regeneron’s polyclonal antibody cocktail. He has been taking zinc, & vitamin D as well as Amotidine, melatonin and a daily aspirin.

His symptoms are said to be mild, with tiredness, a slight fever, and a mild cough.

The CDC about 2 weeks ago listed these survival rates and noted people seem to be getting ill with a lower viral load, and deaths are far less.

Several other people close to the White House and US government have tested positive in a growing list. Multiple tests will be given as two negative tests days apart are needed to assure a true negative. In the meantime those with exposure need to quarantine.

Rona McDaniel, head of the RNC has tested positive.

Joe & Jill Biden have tested negative. The campaign announced it will withdraw all negative ads. Others:

The country/world learned of this by a Tweet from the First Lady and then the President, at approximately 12:57am on Friday, Oct. 2nd.

The President’s age puts him in higher risk, as well as his weight, but he is in excellent health with no other co-morbidities. His past physician said how healthy he is and he may do very well, even showing no symptoms.

The President has been tested at least once a day, so this is early on, and his viral load may be small.

Text of original statement from Sean Conley, physician to the president:

“This evening I received confirmation that both President Trump and First Lady Melania Trump have tested positive for the SARS-CoV-2 virus.

The President and First Lady are both well at this time, and they plan to remain at home within the White House during their convalescence.

The White House medical team and I will maintain a vigilant watch, and I appreciate the support provided by some of our our country’s greatest medical professionals and institutions. Rest assured I expect the President to continue carrying out his duties without disruption while recovering, and I will keep you updated on any future developments.”

The Trump campaign is expected to move forward with surrogates – family members, others. They have also indicated several events may be moved to virtual – whether or not the president will participate by virtual address remains to be seen.

The debate seems doubtful to happen on Oct. 15th or may take place virtually. New rules have already called for the candidates to be seated at least 12 feet apart. The VP debate is expected to take place as scheduled.

3 Members of the G7 have now been afflicted with coronavirus and recovered.

Britain’s PM Boris Johnson is the most famous of the world leaders to have recovered from coronavirus. He was quite ill and taken to hospital for treatment and has now fully recovered. He taped a message of good wishes for the president.

Brazilian president Jair Bolsonaro – described it as “a little flu”.

Monaco’s head of state, Prince Albert II had contracted the virus in mid-March, and was fully recovered by the first of April.

The Honduras president, Juan Orlando Hernandez, who announced his treatment with a zinc/medication combination, had a short hospital stay, and recovered.

The Guatemalan president, Alejandro Giammattei, tested positive in September, is having mild symptoms such as cough, and is recovering.

Bolivian interim president, Jeanine Anez – she is recovering, having had mild symptoms.

Well wishes from world leaders have been posted and shown on video. These include Kim Jong-un of North Korea, Vladimir Putin of Russia (who also offered their new vaccine). China had a statement saying that the president’s illness will make the US look weak.

This story will be updated throughout the day…