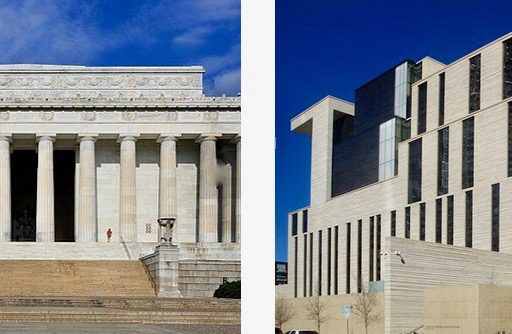 Unify in the fight for beauty

By David Brussat, Architecture Here and There, contributing writer

The draft executive order to encourage classical architecture for federal buildings in Washington and elsewhere has shifted the world of architecture on its axis. Patrick Webb, a teacher of ornamental plastering at the American College of Building Arts in Charleston, S.C., describes today’s situation with force and concision. Citing decades of classical subservience to modernist hegemony in the design field, Webb sums up the immediate and potentially profound impact of the draft order, entitled “Making Federal Buildings Beautiful Again“:

We cannot go on acting as if we inhabit the old universe. The genie is out of the bottle. We now exist. The forum of action and the base of power has shifted to the public realm. There we are not minorities, perhaps even equals, and may in fact hold the advantage. New circumstances call for new leadership, one that will press that advantage to its absolute limit.

Let us assume that the prospect of a switch to classicism from what has effectively been a mandate for modernist federal architecture since 1962, at the very least, has not already been stifled in its cradle. What has happened since Feb. 4, when the draft order was leaked to the Architectural Record?

What has happened is that the forces of modernism have coalesced in a high and mighty dudgeon of opposition to the order. In response, the classicists have formed a classic circular firing squad. Although some of the classical opposition seems fired by Trump hatred, most of it seems sincerely based on strategic concerns. Not that most people would want their brand spokesman to be the president of the United States. I understand that. Classicists must do a deep think, swiftly, and rise above personality. The stakes are too high.

I have scrolled through a lot of emails and commentary from classicists for and against the order over the past few days. Some classicists’ arguments against the order parrot (insincerely, I hope) modernist arguments against classicism, such as the concern with diversity that I mentioned two days ago in “Bring diversity to fed design.” Another said that the order is “a trap” of, no doubt, the let’s-you-and-him-fight variety. I doubt that the order was planted by spies from the American Institute of Architects, but it sure does look that way, given how many leading classicists – or rather leading leaders of classicist or classicist-sympathizing organizations – have come out against it. In the manner of apparatchiks down through history, they’ve got jobs to do. They don’t want to rock the boat, or enter roiling seas, even if their ship is named Classical Architecture. Better to fight another day!

The most ridiculous arguments against classicism are that the Nazis liked classical architecture. Well, it’s not as if they had any real choice in largely pre-modernist 1932. Or as if a building’s style is blameworthy for the lizards within. I like our McKim, Mead & White Rhode Island State House no matter how many scoundrels harbor under its dome. These arguments against classicism are as weak as arguments come, but because modernists have never had to face an opposition press, they have never had to defend them. The classical bureaucracy has had its fill of them and lacks the stamina for the fight required to knock them down again and again. Which is why the modernists are deploying them against the draft executive order. It works. It would not work if classicists fought back. Consciously and unconsciously, the public is on the classicists’ side.

Today nobody pays any attention to the fact that the Nazis liked classicism, except for modernists who want to heave that dead cat on the portico of classical architecture. In fact, Hitler and the Nazis embraced modernism for factories and other utilitarian buildings, as Prof. James Stevens Curl reveals in his excellent history of modern architecture, Making Dystopia: The Strange Rise and Survival of Architectural Barbarism (2018). As he and others have shown, founding modernist Ludwig Mies van der Rohe worked with Hitler through Goebbels trying to have modernism accepted as the design template for the Third Reich. Mies pushed but Hitler refused. That says a lot more about how modern architecture saw itself in its founding era than about how classicism’s legacy should be viewed today. But these are the secrets that modernists keep in their deep, dark, locked closets. Read Professor Curl. Arguably the leading American modernist of that era was so enamored of the Nazis that he entered Poland with the Wehrmacht. American journalist William Shirer thought Philip Johnson was not just tantalized by the Nazis but a propagandist for them. And his FBI file confirms that he was. This was long after he had famously curated the Museum of Modern Art’s 1932 show on the International Style. Read The Man in the Glass House (2019), by Mark Lamster, architecture critic for the Dallas Morning News, who is about as far as you can get from a classicist. As for—-

I had so hoped to follow in the high-minded footsteps of Patrick Webb. In announcing a fourth meeting of the TradArch list in D.C., he writes grandly:

I can promise you this: TAG 4 will not be a lament by victims of what has happened to us. Rather it will be a call to action to reorient ourselves to the world as it is. We’re not weak. We are strong as we have the Good, the True and the Beautiful at our backs.

As the modernists recognize full well.

That explains the vigor of their attack on the draft executive order, but it doesn’t explain why some classicists seem so willing to play, in this ultimate and completely unexpected opportunity, into the modernists’ weak hand.

So, before my own head explodes, I will close by noting, with Webb, that the widespread popular preference for classical and traditional architecture that has prevailed ever since modern architecture was born a century ago gives classicists a big advantage. If we have the courage to fight this battle. So, please, let us unify. If we don’t, there will be no second chance.