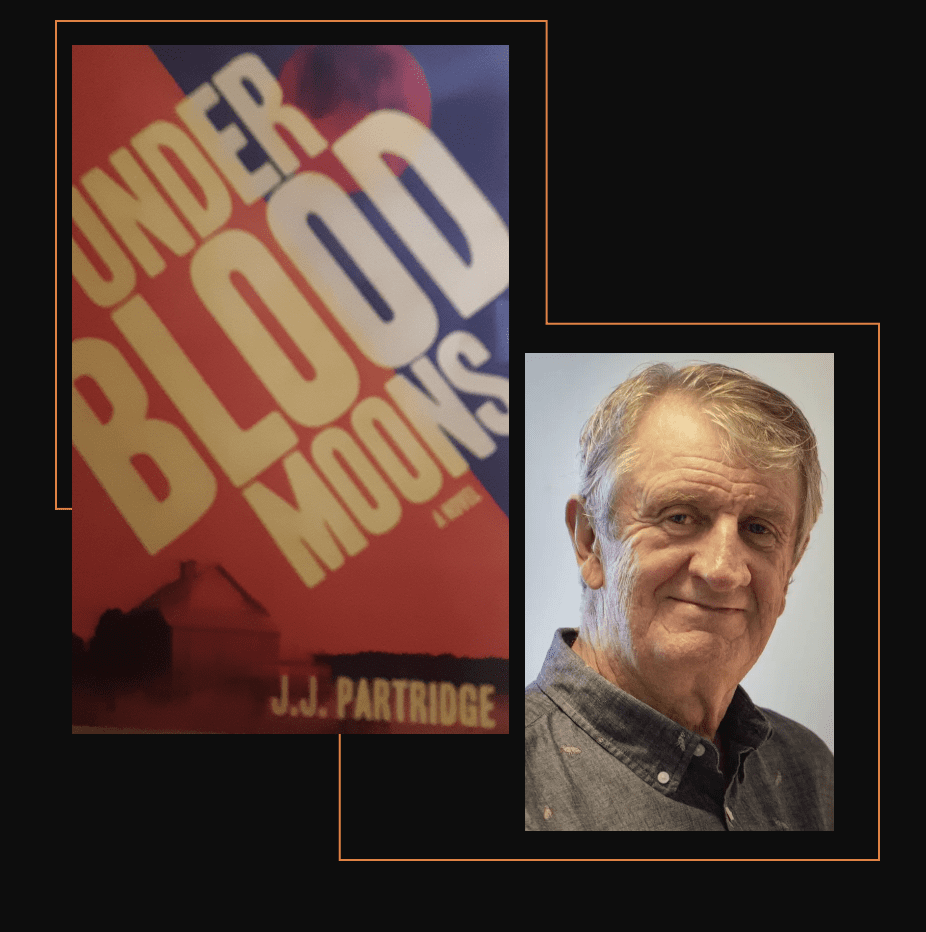 Local author J.J. Partridge has moved out of the pool hall. His first works were the Algy Temple trilogy; Scratched, Straight Pool and Carom Shot. As the titles imply, all these novels have a common denominator.

Partridge, a recently retired prominent Providence attorney, has expanded his literary reach with his latest book, Under Blood Moons. Using his home state of Rhode Island and his childhood city of Pawtucket as vivid background, he tells a multi-level tale of murders, political shenanigans, love, and revenge. From the clannish parochial schools of Pawtucket to the shady mob infested scrap metal operations at the Providence harbor front, Partridge’s characters, in the local vernacular, “Do what ya’ gotta do”.

Although Partridge’s legal career was oriented towards business law, in Under Blood Moons he explores the inner workings and conflicts of criminal courtrooms and parole boards.

At the book’s opening, Aaron Underwood is a thirteen year old junior high misfit, often bullied and eventually goaded into a Halloween prank which goes horribly wrong. Fast forward thirty years and prisoner Underwood is up for his third attempt at parole. Jake Fournier, an Iraq War amputee (right arm) veteran is the newest board member. Jake carries the baggage of the unsolved death of his pregnant wife in a hit and run accident. The three year old case had gone cold with little police activity, but Jake remains relentless in his pursuit to find the driver.

Partridge has produced, to coin an old phrase, a pot boiler. Under Blood Moons’ ingredients include multiple wise guys, barely ethical gumshoes, glad handing politicians and damaged, but heart of gold women. Stereotypes seem to abound, but are they stereotypes when they ring true?

The dialogue of the motley crew which runs Rhode Island Scrap Metal sounds like The Sopranos with a pinch of Rhode Island accent.

“Waz up? How am I doin’?” Fat Frankie asked impatiently.
“Ya don’t ask about yer mama?” Chris replied with an argumentative authority.
“So, I gotta know how dis is goin’ down…”

There is little doubt this conversation could take place at many Social Clubs around Federal Hill.

Although a fast paced, sometimes grisly, murder mystery, Under Blood Moons does raise serious questions about the parole system. What impact does a prisoner’s physical appearance have on the parole board’s decisions? How does a jurisdiction balance the psychological bent of board members – lenient versus hard-nosed tendencies? How much sway does political patronage have in selecting board members and influencing their votes?

While Under Blood Moons is a successful leap in Partridge’s post-retirement writing career, it is not without flaws. Some character descriptions could have benefited from a heavier dose of editing. Livia, Jake’s love interest “…swept into the office in a dark – blue – with – white – polka – dots hostess dress accented by a strand of Mikimoto pearls rippling over her ample breasts.”

Fortunately there are only a few instances where this pot boiler spills over and makes such a mess.

Rhode Islanders are notorious for their fascination, even obsession, over movie scenes filmed in their small state. Security staff at filming sites have to be very wary of film stalkers. Well, now while cinema fans await the next Hocus Pocus they can enjoy a romp through India Point, a night at the Dunk, and even a drink at Duffy’s Tavern by reading Partridge’s tale as it winds its way through the local landmarks.