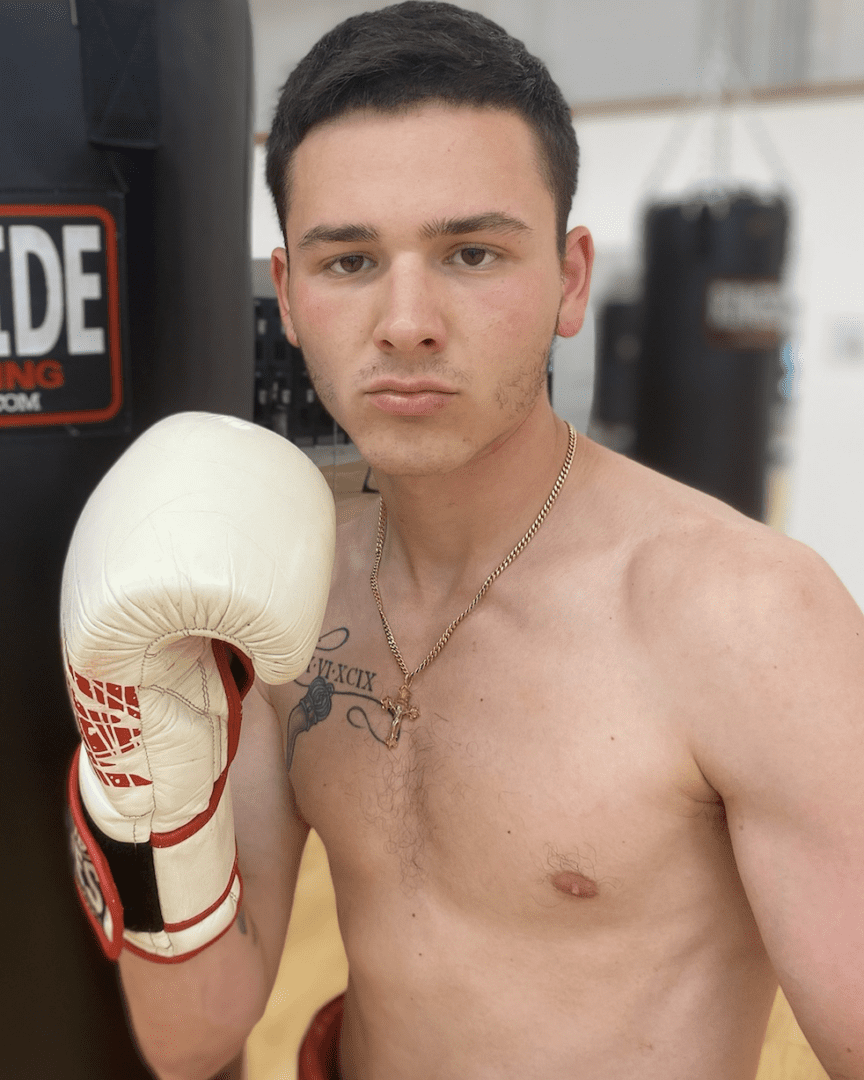 For up-and-coming boxer Tyler “My Time” Macari is hoping his time is now and that he wants to make it known to everyone that he is here to stay!

The plan wasn’t for Scituate’s Tyler Macari to try to make a career in the boxing ring. “I did start boxing when I was 9 years old. My father Mike boxed. When my father was younger, he won the Gold Gloves championship!’ Marcari proudly proclaims. “My father passed the desire of the sport onto me at the age when kids start to box and learn how to fight. At the time I enjoyed boxing and never really thought about it as a career. I was into basketball and football growing up.” As Macari got older, he decided that basketball was his first love and was intending on pursuing that sport in high school and beyond.

“I enrolled at LaSalle Academy and played on the basketball team a couple of years. I soon realized that I wasn’t going to be in their plans, so I transferred to the Prout School in the southern part of the state. For a variety of reasons, I ended up finishing and graduating from Scituate High school”. Not one to give up on his dreams of playing basketball on the next level, Macari was recruited to play for division 3 Northern Vermont University. There he suffered an injury to the ACL & MCL of his knee, which put him on the shelf. Wanting to regroup and get himself in the proper frame of mind for what his next move was going to be, he decided to return home, enroll at the Community College of Rhode Island and start over. Macari found that being a “walk on” at CCRI was very tough and although he found himself fitting in with players and their off-season work outs very well. In the end he was let go from the team. “It was difficult for me to swallow, here I was coming from a division 3, four-year program only to get cut at the Community College level. I realized that the team had a lot of talented ball players, but I felt that I could have brought something different to the team, however the coach felt differently.” Marcari said.

So, with his dreams of playing college basketball over Marcari talked over his future with his mother and father. He decided that he wanted to go back into boxing, at first it was a means to vent his anger and frustrations, but it soon developed into a passion and then obsession. He asked his father to become his trainer and manager. His father agreed and even opened a gym called Main Event Boxing that is in Cranston, Rhode Island. They also agreed that Tyler couldn’t have his father manage him and train him and go back home to him. “We knew that we needed a mental break from each other for this all to work out.” Macari said, “so we brought in Jodie Corvese, an experienced trainer to work with me inside the ring. This way we can keep our father and son relationship in place and if I have a tough day in the gym, it’s not brought back home.”

It was earlier in the summer when Tyler was given what was to be his first amateur boxing event when he secured a spot on the card to an event that was promoted by Rhode Island’s own legendary boxing promoter, Jimmy Birchfield and his CES productions. The event was called the “Thriller at the Stadium” it was the first boxing event to be held at Cranston Stadium in over sixty years. The day’s bout was divided in to two fighting events, the professionals fought during the afternoon and the amateurs were to fight in the evening. Macari was scheduled to be the last fight of the night. He was fighting in the 152 class. “It was the feature fight of the night for the amateurs, I was pumped and excited!” However, the bout was stopped virtually as it began, heavy rain began causing the outdoor ring to become a hazard to the fighters. “I was disappointed but understood that fighting in those conditions wasn’t ideal and someone could have gotten hurt.”

The next thing to do was to get back to work and stay in shape and be ready for his next fight. That opportunity didn’t take long to present itself. The Golden Gloves tournament was being held in late August and Macari was determined to enter the tournament. The Golden Gloves are fights that are scheduled locally, regionally, and nationwide. Promising fighters enter these tournaments for experience and prominence. Fighting in Golden Glove events put’s fighters who are serious about the sport into the limelight and they measure themselves and abilities against some of the best fighters climbing the same ladder to the professional ranks. Tyler won his opening bout on a TKO and will fight for the 152-weight class of the areas Golden Glove championship on Saturday, August 28th. What the crowd can expect I described by Tyler, “I am not a middle of the ring, toe to toe brawler. I am a jab and move, counter punch type of fighter. I pick my attack points when they present themselves. Most fighters get sloppy and don’t stick to the game plan and that’s where I get the advantage. I calculate and analyze as I pace myself and look for opportunities.”

As this interview concluded, I asked Tyler what he envisioned his career would look like as it progressed. He stated, “I would like to get perhaps 50 amateur fights under my belt, then turn pro, climb the ladder and take advantage of my opportunities and invest.” He is fully aware that boxing is a tough, unforgiving sport but he is prepared to put the work in and go at it 100 percent. For Tyler “My Time” Macari he his betting that his time is now!

Editor’s note I will be checking in and reporting on Tyler Macari’s progress as he climbs up the ladder of being a professional fighter. So, this will be part one of a multi-part career long series.