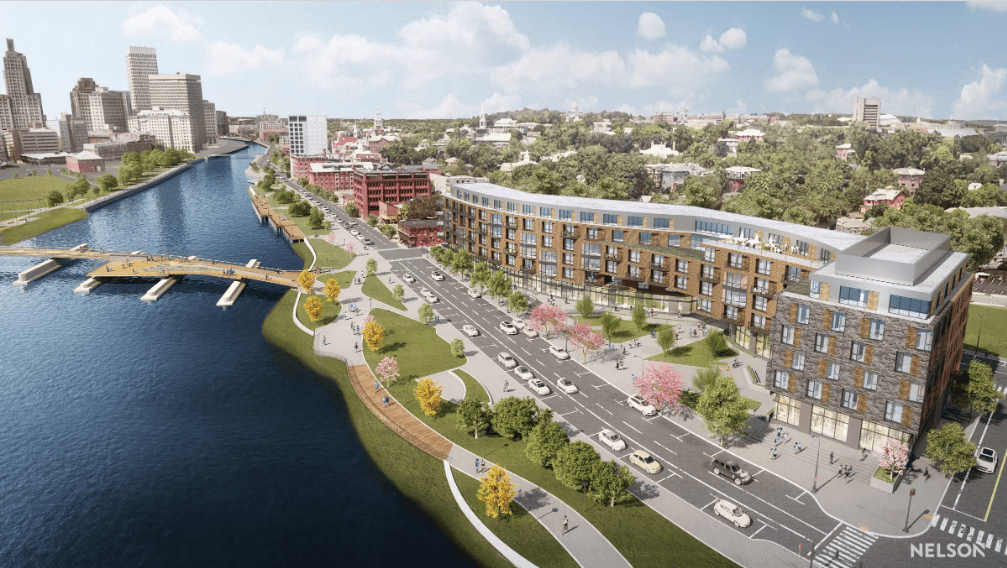 The I-195 District Redevelopment Commission, at its Sept. 20 meeting, looked at three proposals for mixed-use apartment complexes on former highway land east of the Providence River. One proposal exceeds the other two in appearance. That should be the primary basis upon which the commission makes its choice.

The preferred alternative comes from the Boston development firm of Parent and Diamond. Nelson Worldwide, a minority-led architecture firm (according to the official submission), designed the complex. It features what, from a drawing (see above), appears to be a more or less traditional building of six stories with a gentle undulation stretching two blocks, clad in brick or brick-shaped stone with mostly regular windows, sited between South Main and South Water streets, and facing the curved Van Leesten pedestrian bridge. The building’s curvature may raise eyebrows among some purists, but the look of the main structure is quite pleasing – surely compared with the other two proposals.

These, respectively from Urbanica and Eden (both also of Boston and both illustrated below), feature façades, in the first case, of syncopated fenestration (modern architecture’s reigning cliché) throughout plus more curvature and, in the second case, blockish extrusions in contrasting colors with a cockeyed slant roofscape and, once again, syncopated windows.  … Yawn!

The Nelson design team also sucked it up and added the seemingly obligatory syncopated windows in a relatively small square block at the south end of its complex. This is far from intrinsic to its design, and can be got rid of easily. (Such windows are key to the Urbanica proposal, but could still be easily nixed.)

Usually, design that embraces structure with a lengthy pedigree, such as regular, aligned window placement rather than irregular, syncopated, window placement, is less expensive and more pleasing precisely because builders learned long ago that regularity serves a host of design and construction priorities. Centuries of experience had ingrained the utility of regular forms in practice, and their allure in the eye of most of the public, until the past half century or so. Regularity need not prevent innovation, but innovation with no foundation in regularity raises costs and risks ugliness.

Fortunately, innovation founded on regularity forms the basis of all historical architecture in the city of Providence. The character of this heritage is, indeed, the brand of Rhode Island and its capital city, which were founded in 1636.

Unfortunately, the home truths that should have been the basis of architectural development have been ignored by city officials, not to mention developers and architects, since around 1960. The result has been the gradual uglification of the city and the profound alienation of citizens from their surroundings. This in spite of the fact that the laws pertaining to development here mandate that new construction projects respect the city’s historical character. Just look at a single example, Article 6, Chapter 606 of the city zoning ordinance, one of many such historical mandates festooned throughout city and state zoning codes:

The purpose of these standards is to preserve the urban fabric of Downtown Providence and ensure that new construction complements the historic character and architectural integrity of existing structures.

The law has simply been ignored by officials up and down the ladder, from city planners and members of preservation committees all the way up to the city’s mayors and the Ocean State’s governors – including the I-195 Redevelopment Commission that oversees development on the land opened by the relocation of Route 195, completed in 2010. As has been the case, no building erected under the auspices of the commission has added to the beauty of the city’s skyline or the charm of it streetscapes.

If branding has any rational purpose, it is to guide officials toward economic development that will allow a city (or other entity) to build upon its leading advantages. In the case of Providence, that would be historical character. How has this basic truth eluded generations of civic leaders here?

It should be no surprise: No building erected since 1960, with one exception, has added to the beauty of the city skyline or the charm of its streets. The single exception is the fitness center on Hope Street at Brown, which was planned to be as modernist as every new Brown building in the past half century or so, but was changed at the request of its leading donor, Jonathan Nelson. (No relation to the Nelson Worldwide architecture firm, so far as I know.) The beautiful result was the work of Robert A.M. Stern Architects, of New York City. But then Nelson, a multi-billionaire, turned around and financed an ugly entrepreneurship center of modernist design on Thayer Street, nixing a revival of attractive architecture there. For shame! Entrepreneurship, indeed! Have you learned nothing? You should return the Bulfinch award for patronage you received for the fitness center design in 2016 from the Institute of Classical Architecture & Art.

(Make it two exceptions. The 1990 addition to the John Carter Brown Library on the Brown campus but not part of Brown University, designed by Hartman-Cox, is a beautiful work that respects the original 1904 Beaux Arts design. Or three exceptions: The Ruane Center for the Humanities of 2013, designed by S/L/A/M, is lovely, but subsequent new buildings have shown that even at Providence College, success doesn’t necessarily mean learning has occurred.)

But I digress. Candidates for office in upcoming mayoral and gubernatorial elections should declare whether they are for pushing developers to provide architecture that will strengthen the longstanding brand of Providence and Rhode Island – and, for that matter, to obey the law. It may seem a lost cause in the current 195 innovation district (which is mostly apartment complexes), but in returning to the habit of beauty the city and state must start somewhere.