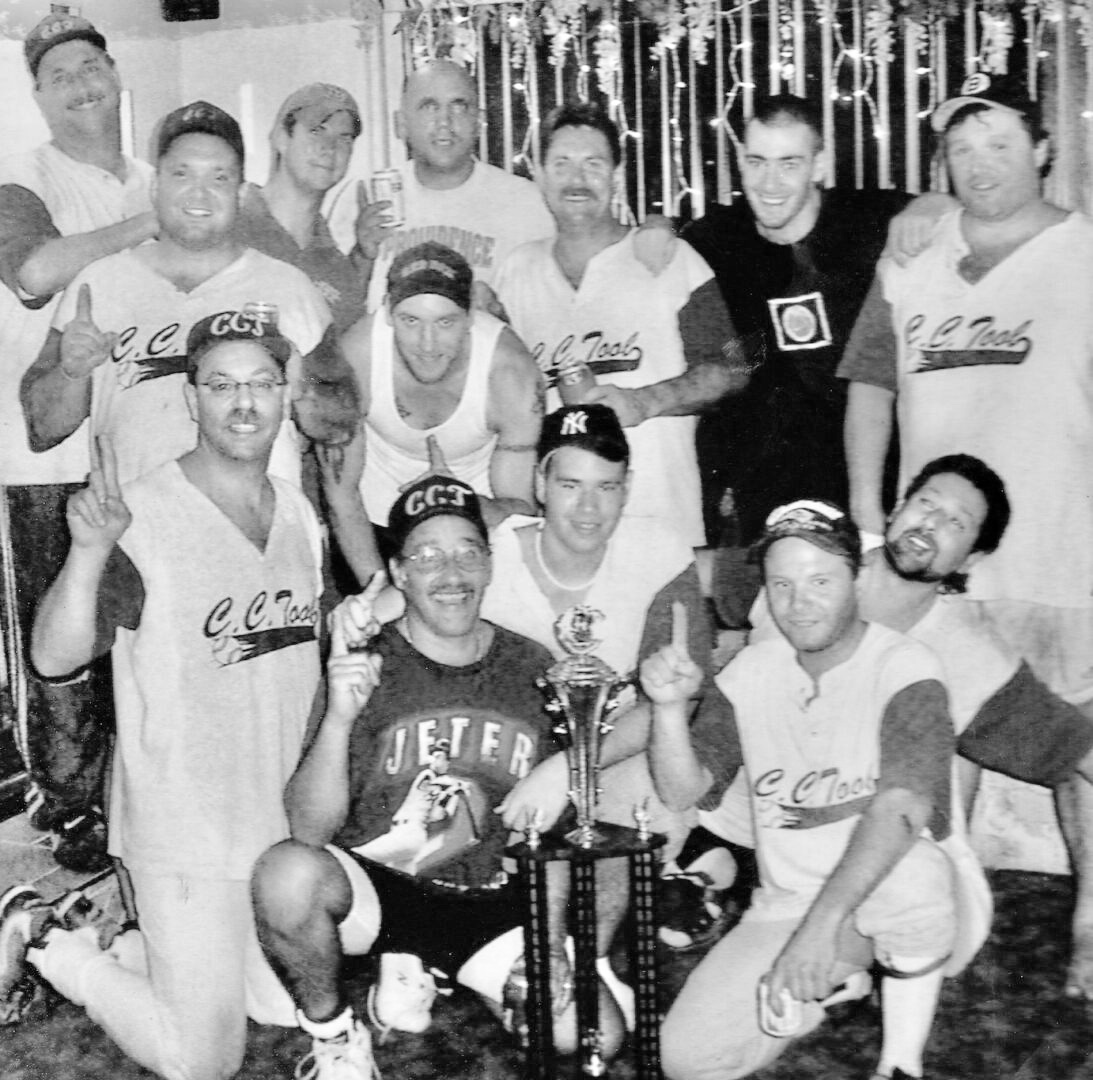 Original article: April 30, 2021/John Cardullo, sportswriter. This article gained more readers than any other this week!

35 years this season – and no intentions of slowing down!

It takes a lot to start a men’s softball team and keep it together. Most teams on average may make it to the five-year mark which is considered nowadays a long time. Teams often do not even make it past the one-year anniversary, so to make it 35 years is unheard of!

But for the Warwick’s Twin Oaks (yes, the iconic Cranston restaurant), Men’s Softball Team, they would not even think about breaking up and going to play elsewhere. “We have gone from a Twi-lite softball team to becoming friends, to becoming a family,” said team founder and now Co-Coach, Bob Schoeninger, who along with Mike Regine both started their careers in the early 1980s on separate, rival teams and merged into what has become one of, if not the longest continuing men’s softball teams in Warwick.

To get to where the team is currently, we must go back to 1982 when Regine was playing for a neighborhood team from Cranston called Villa Ave. and Schoeninger was playing alongside his brother, Al, on a team they founded called FUBAR (a known military term). Both teams had similar experiences and early success, but as all too often happens, players priorities change, and the teams eventually broke apart.

The Schoeninger brothers who in 1987 began to sponsor the team known as C & C Tool and reached out to Regine whose own team broke apart as well. Regine, along with a few teammates, merged and started what was going to be a 35 plus year journey where friends would become family.

“We don’t have a lot of player turn over” said Regine, “most people come here because we are competitive, and we enjoy each’s other’s company. There is no drama, just softball and good times.” He added, “too many people and teams focus on the win-loss record as a meter of success. We focus on – did we compete? Did we have fun? And do we still enjoy being together? If we can answer “yes” to these three questions, then we continue on.” It is not to say that the team has not had their share of success, as a matter of fact they have won the league championship three times. The first was in 2005 and again in 2009 when they had a 24-5 overall record and the last one was in 2016.

For Schorninger, being part of a softball team became a family affair from the get-go. He and his brother Al were the driving force behind FUBAR, which launched in 1985. Two seasons later the team was renamed C & C Tool that both Al and Bob added on Phil Place as the driving force behind the team. Regine also joined the team in 1987, as well Tom Sheridan and Dan Isles. Schoringer’s two sons, Matt and Bob Jr., were the batboys but would go on to leading roles as players in a very few short years – Matt as the team’s shortstop, and Bob Jr. as the Leftfielder.

Bob Schoringer who started out as the team’s pitcher recalls, “the early days were great! There was me and my two sons, my brother, and my close friends playing all on the same team. It couldn’t get much better than that.” Regine echoed the same sentiment, “we began on two different teams and got together and have remained together through thick and thin.”

Schorninger who is 63, and contributes now as a coach, scorekeeper and a “break glass only in emergencies” guy very rarely sees the field other than from the dugout nowadays. “When the balls and bats were juiced up a few years back, I decided that it was time for me to cut back and let the younger guys move in,” he said.

Regine who in 2009 brought in current sponsor Twin Oaks after the team was sponsored for two seasons by Specialized Orthopedic Physical Therapy decided to call it quits. “I still love to get on the field and play.” Regine says, “I started out as the team’s third baseman and moved over to first base. I realize it’s time to let the younger guys get more playing time so I will move to the batting position of extra hitter (each team can have one additional batter in the lineup only to hit and not play the field), or pitch hitter.” He adds, “I have no intention to not play; when I feel that I cannot contribute as a player, then I will consider retiring!”

“We have a reputation of being a good-natured team, win or lose.” Regine said, “everyone enjoys playing us. We play hard and they play hard, but when the game is over it is over! We don’t bring any drama and don’t accept those who do.” Schorninger adds, “At the end of the day, we all have to get up and go to work, raise our families and live our lives. Softball is fun and we all enjoy the game, and we compete hard when playing. But when it is over it’s team fun time, er, I mean team meeting time!”

Freedom Softball State Director Bob Berard says about Twin Oaks, “They have been part of Warwick softball for a very longtime and it has been a pleasure having them here. They play hard and with style and class! I wish all our teams could be more like Twin Oaks.” One thing is certain that Twin Oaks will be here as long as there is softball to play in the Twi-lite League on Monday and Wednesday’s; Twin Oaks will have a team on the field.