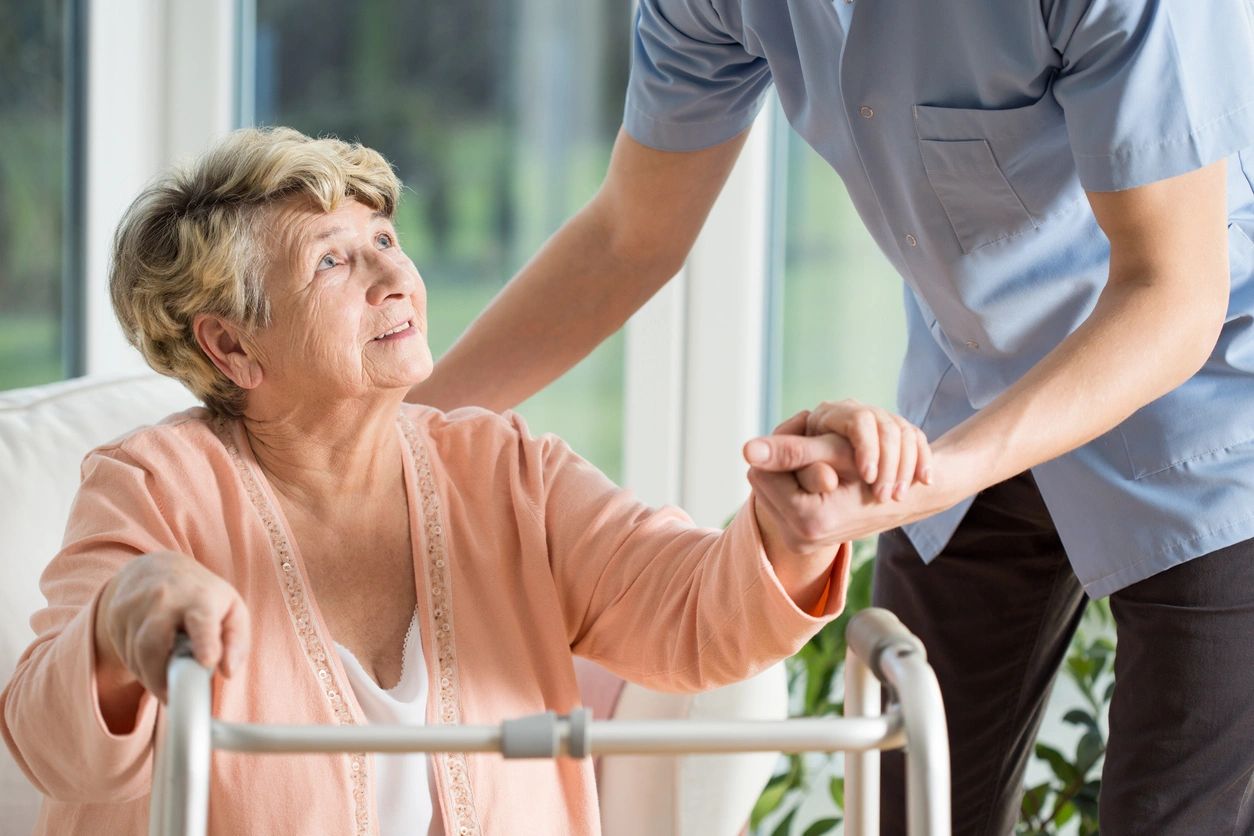 The latest release of AARP’s Nursing Home COVID-19 Dashboard shows that both cases and deaths in nursing homes declined in the four weeks ending March 21. Although these rates are improving, chronic staffing problems in nursing homes—revealed during the COVID-19 pandemic—continue. In Rhode Island, 30% of nursing homes reported a shortage of nurses or aides, which is only fractionally better than the previous reporting period.

AARP has come out swinging to fight for enhancing the quality of care in Rhode Island’s 104 nursing homes.

AARP Rhode Island, representing 131 members, calls for the General Assembly to ensure the quality of care for the state’s nursing home through minimum staffing standards, oversight, and access to in-person formal advocates, called long-term care Ombudsmen. The state’s the largest aging advocacy group has urged lawmakers to create a state task force on nursing home quality and safety and has pushed for rejecting immunity and holding facilities accountable when they fail to provide adequate care to residents.  It’s also crucial that Rhode Island ensures that increases in nursing homes’ reimbursement rates are spent on staff pay and to improve protections for residents, says AARP Rhode Island.

Last December, AARP Rhode Island called on Governor Gina Raimondo to scrap Executive Order 20-21 and its subsequent reauthorizations to grant civil immunity related to COVID-19 for nursing homes and other long-term care facilities. The aging advocacy group warned that these facilities should be held responsible for providing the level of quality care that is required of them for which they are being compensated.

During the legislative session, the state’s nursing home staffing crisis caught the eye of Senate Majority Whip Maryellen Goodwin is a policy issue that needs to be addressed. They knew that Rhode Island ranked 41st in the nation in the number of the average hours of care nursing home residents receive, according to data from the Centers for Medicare and Medicaid Services.  The state also has the lowest average resident-care hours per day of any New England state.

On Feb. 2, the Rode Island Senate approved S 0002, “Nursing Home Staffing and Quality Care Act” sponsored by Goodwin and nine Democratic cosponsors to address an ongoing crisis in staffing nursing homes that has been exacerbated by the COVID-19 pandemic.  The bill had passed unanimously in the Health and Human Services Committee, and ultimately, the full Senate gave its thumbs up to the legislative proposal by a vote of 34 to 4.  Only one Republican senator crossed the aisle and voted with the Democratic senators.

“There is a resident care crisis in our state. Staffing shortages and low wages lead to seniors and people with disabilities not receiving the care they desperately need. The pandemic, of course, has exponentially increased the demands of the job and exacerbated patients’ needs. We must confront this problem head-on before our nursing home system collapses,” said Sponsor Senator Goodwin (D-Dist. 1, Providence).

The legislation would establish a minimum standard of 4.1 hours of resident care per day, the federal recommendation for quality care long endorsed by health care experts including the American Nurses Association, the Coalition of Geriatric Nursing Organizations, and the National Consumer Voice for Quality Long-Term Care. The bill, which the Senate also approved last year, has been backed by Raise the Bar on Resident Care, a coalition of advocates for patient care, and the Rhode Island’s Department of Health (RIDOH).

The bill would also secure funding to raise wages for caregivers to recruit and retain a stable and qualified workforce. Short staffing drives high turnover in nursing homes. Not only does high turnover create undue stress and burnout for remaining staff, but it also diverts valuable resources to recruit, orient, and train new employees and increases reliance on overtime and agency staff.  Low wages are a significant driver of the staffing crisis. The median wage for a CNA in Rhode Island is less than $15, and $1/hour lower than the median wage in both Massachusetts and Connecticut.

The legislation would also invest in needed training and skills enhancement for caregivers to provide care for patients with increasing acuity and complex health care needs.

RIDOH’s Director Nicole Alexander-Scott, MD, MPH says the state agency “supports the thoughtfulness of the provisions included in the legislation and welcomes dialogue with its sponsors, advocates, and the nursing home facility industry regarding methods to sustain the necessary conditions associated with the intent of the bill.”

Alexander-Scott states that “RIDOH takes its charge seriously to keep nursing home residents and is supportive of efforts to update standards of care to better serve Rhode Islanders in nursing facilities, as well as increase resident and staff satisfaction within nursing facilities.”

According to Fraser, state law requires Medicaid to be funded at a national inflation index, usually averaging around 3%. “Up until this year, previous governors have slashed this amount resulting in millions of dollars in losses to our homes.  Thankfully, Governor McKee is proposing to fully fund the Medicaid Inflation Index this year,” he says.

RIHCA opposes the mandatory minimum staffing the legislation now being considered by the Rhode Island General Assembly, says Fraser, warning that its passage would result in facilities closing throughout the state. “No other state has adopted such a high standard,” he says, noting that the Washington, DC-based American Health Care Association estimates that this legislation would cost Rhode Island facilities at least $75 million to meet this standard and the need to hire more than 800 employees.

Fraser calls for the “Nursing Home Staffing and Quality Care Act” to be defeated, noting that the legislation does not contain any provisions for funding.  “Medically, there is no proof that mandating a certain number of hours of direct care results in any better health outcomes.  This is an unfunded legislative mandate. If homes are forced to close, not only would residents be forced to find a new place for their care, but hundreds of workers would also be forced out of work,” he says.

Goodwin does not believe that mandating minimum staffing requirements in nursing homes will force nursing homes to close. She noted that the legislation is aimed at ensuring nursing home residents receive adequate care and that Rhode Island is the only state in the northeast without such a standard.

“There is an un-level playing field in nursing home staffing in Rhode Island,” charges Goodwin, noting that many facilities staff 4.1 hours per day, or close to it, while others only provide two hours of care per day. “In either case, the overwhelming majority of well-staffed and poorly-staffed nursing homes remain highly profitable,” she says.

According to Goodwin, the lack of staffing and certified nursing assistants (CNAs) is due to unreasonable workloads and low pay. “RIDOH’s CAN registry makes it clear that retention of these workers is a big issue. This is in part because they can make as much money – or more – in a minimum wage profession with much less stress,” she adds, stressing that “The Nursing Home Staffing and Quality Care Act” directly addresses these staffing challenges.

One quick policy fix is to provide nursing home operators with adequate Medicaid reimbursement to pay for increased staffing.  Lawmakers must keep McKee’s proposed increase of nursing home rates pursuant to statute, requiring a market-based increase on Oct. 2021, in the state’s FY 2020 budget. The cost is estimated to be $9.6 million.

With the House panel recommending that Slater’s companion measure ((2021-H-5012) to be held for further study, Goodwin’s chances of seeing her legislation becoming law dwindles as the Rhode Island Assembly’s summer adjournment begins to loom ever closer. There’s probably no reason to insist that a bill be passed in order to have a study commission, so this could be appointed right away if there is serious intent to solve this problem.

Slater’s legislation may well be resurrected in the final days of the Rhode Island General Assembly, behind the closed doors when “horse-trading” takes place between House and Senate leadership.  If this doesn’t occur, either the House or Senate might consider creating a Task Force, bringing together nursing home operators, health care professionals and staff officials, to resolve the state’s nursing home staffing crisis.

Herb Weiss, LRI’12, is a Pawtucket writer covering aging, healthcare, and medical issues. To purchase Taking Charge: Collected Stories on Aging Boldly, a collection of 79 of his weekly commentaries, go to herbweiss.com.