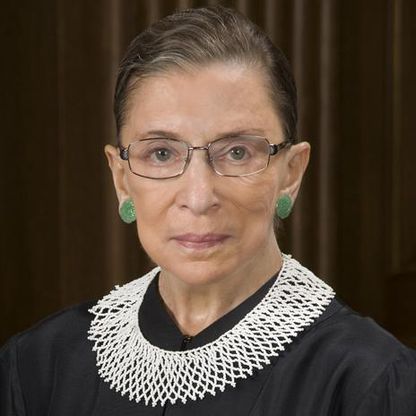 The passing of the US Supreme Court Justice Ruth Bader Ginsburg. September 18, 2020

Associate Justice Ruth Bader Ginsburg died this evening surrounded by her family at her home in Washington, D.C., due to complications of metastatic pancreas cancer. She was 87 years old. Justice Ginsburg was appointed to the Supreme Court by President Clinton in 1993. She was the second woman appointed to the Court and served more than 27 years. She is survived by her two children: Jane Carol Ginsburg (George Spera) and James Steven Ginsburg (Patrice Michaels), four grandchildren: Paul Spera (Francesca Toich), Clara Spera (Rory Boyd), Miranda Ginsburg, Abigail Ginsburg, two step-grandchildren: Harjinder Bedi, Satinder Bedi, and one great-grandchild: Lucrezia Spera. Her husband, Martin David Ginsburg, died in 2010.

Chief Justice John G. Roberts, Jr. said of Justice Ginsburg: “Our Nation has lost a jurist of historic stature. We at the Supreme Court have lost a cherished colleague. Today we mourn, but with confidence that future generations will remember Ruth Bader Ginsburg as we knew her — a tireless and resolute champion of justice.”

Justice Ginsburg was born in Brooklyn, New York, March 15, 1933. She married Martin D. Ginsburg in 1954. She received her B.A. from Cornell University, attended Harvard Law School, and received her LL.B. from Columbia Law School. She served as a law clerk to the Honorable Edmund L. Palmieri, Judge of the United States District Court for the Southern District of New York, from 1959–1961. From 1961–1963, she was a research associate and then associate director of the Columbia Law School Project on International Procedure. She was a Professor of Law at Rutgers University School of Law from 1963–1972, and Columbia Law School from 1972–1980, and a fellow at the Center for Advanced Study in the Behavioral Sciences in Stanford, California from 1977–1978. In 1971, she was instrumental in launching the Women’s Rights Project of the American Civil Liberties Union, and served as the ACLU’s General Counsel from 1973–1980, and on the National Board of Directors from 1974–1980. She was appointed a Judge of the United States Court of Appeals for the District of Columbia Circuit in 1980. During her more than 40 years as a Judge and a Justice, she was served by 159 law clerks.

While on the Court, the Justice authored My Own Words (2016), a compilation of her speeches and writings.

A private interment service will be held at Arlington National Cemetery.

Ginsburg talked to more than 200 law students, faculty and staff during a “fireside chat” with 1st U.S. Circuit Court of Appeals Senior Judge Bruce M. Selya. She addressed partisan battles over judicial nominations, her role in fighting gender discrimination, her friendship with the late Justice Antonin Scalia – and even her workout routine. The event was part of RWU’s year-long series, “Talking About Race, Gender and Power.”

During a question-and-answer session, a law student asked what decision has had the biggest impact on the young generation, and she cited the Supreme Court’s 2015 ruling in Obergefell v. Hodges, which held that the Constitution guarantees a right to same-sex marriage.

“It’s another example of how society has changed and the court is catching up,” Ginsburg said. “With the gay rights movement, people looked around and said, ‘That’s my next-door neighbor’ or ‘That’s my daughter’s best friend.’ There wasn’t that ‘we/they’ anymore.”

When it was written in 1787, the Constitution’s opening phrase – “We the People” – referred to white, male property owners, Ginsburg said. “Over the course of our history, the composition of ‘We the People’ has expanded. It now includes the people left out at the beginning,” she said. “So the idea of an embracive society that not simply tolerates but appreciates differences I think is what made our nation great.”

Selya noted that both he and she were confirmed as judges with overwhelming bipartisan votes, but in recent years Supreme Court nominees have been the subject of bitter partisan battles. Ginsburg said U.S. Sen. Orrin Hatch, R-Utah, was her biggest supporter on the Senate Judiciary Committee, but she agreed that recent high court nominees have not received the same kind of bipartisan support.

“Some day I hope we will get back to the way it was,” Ginsburg said. “I think it would take great leaders on both sides of the aisle to say, ‘Let’s stop this nonsense and start working for our country the way we should.’ ”

Ginsburg said she does not want the public to get the impression that the federal courts are “just another political branch of government.”

“We have a great federal judiciary,” she said. “I hope we can keep it.”

Ginsburg, 84, has faced two bouts of cancer, and at one point Selya asked, “How do you feel now?”

“I feel fine,” she replied, prompting applause. “I attribute my good health to my personal trainer,” who has written a book about her workout routine. “Many reporters want to know about the routine,” but “most of them can’t do it,” she said, drawing laughter.

Selya asked about her friendship with the late Justice Scalia. “Even though we were often an opposite sides, we’d go over each other’s opinions,” she said. “My suggestions were: ‘Nino, you should tone this down – you’d be more persuasive.’ And he would call or come to my chambers and say, ‘You had a couple of grammatical slips in this opinion.’ He always did it on a personal level so he wouldn’t embarrass me.”

Ginsburg said she and Scalia shared a love of opera, and she described the comic opera titled “Scalia/Ginsburg.” In the opera, she recounted, the Scalia figure says, “The Constitution says absolutely nothing about this” and the Ginsburg figure replies, “The great thing about our Constitution is that like our society, it can evolve.”

RWU School of Law Dean Michael J. Yelnosky introduced Ginsburg, citing a song Jews sing during Passover – “Dayenu” – that enumerates blessings, celebrating that any one of them alone “would have been enough.”

“Justice Ginsburg would be worthy of acclaim because she was the first woman named to the Harvard Law Review, and she graduated at the top of her class at Columbia Law School in 1959,” Yelnosky said. “It would have been enough that while teaching she co-founded the Women’s Rights Project of the ACLU, and while teaching she engineered and executed the legal strategy that led the Supreme Court to strike down gender-based government classifications as a violation of the constitution’s guarantee of equal protection.”

“Surely, it would have been enough that in 1993 she became only the second woman to serve on the nation’s highest court,” Yelnosky said. “But of course, there is more. She has become perhaps the best known justice in the history of the court, and she has chosen to be with us today. Dayenu.”

Majority Leader of the United States Senate Chief Justice Mitch McConnell issued a statement: “President Trump’s nominee will receive a vote on the floor of the U.S. Senate.” 51 votes are necessary. 50/50 votes are broken by the vote of the Vice President.

The President had listed his possible nominees:

Senator Hawley said he did not wish to be considered.

Federal Appeals Court Judge Amy Coney Barrett is thought to be a lead candidate, who was a finalist when Supreme Court Justice Brett Kavanaugh was appointed.

Presidential candidate Joe Biden was asked to release his list of nominees, which he has not done.

President Trump’s comments on being informed of Justice Ginsburg’s death:

Joe Biden’s comments on the passing of Justice Ginsburg:

Editor’s Note: Justice Ginsburg said that the symbol of America is not the eagle – it is the pendulum – and when things go too far one way, they will inevitably swing back the other way, seeking equilibrium.

Her best friend was Antonin Scalia. They held many different opinions on politics and issues, but found close friendship in their love of fine wine, traveling, opera, and art.

The ability to have a deep, meaningful friendship with those we disagree with politically stands as a lesson to all who have not managed to do this in these trying times – may we hook into the soul’s of each other as the core of friendship, as a testimony to the personal lessons Justice Ginsburg left behind.