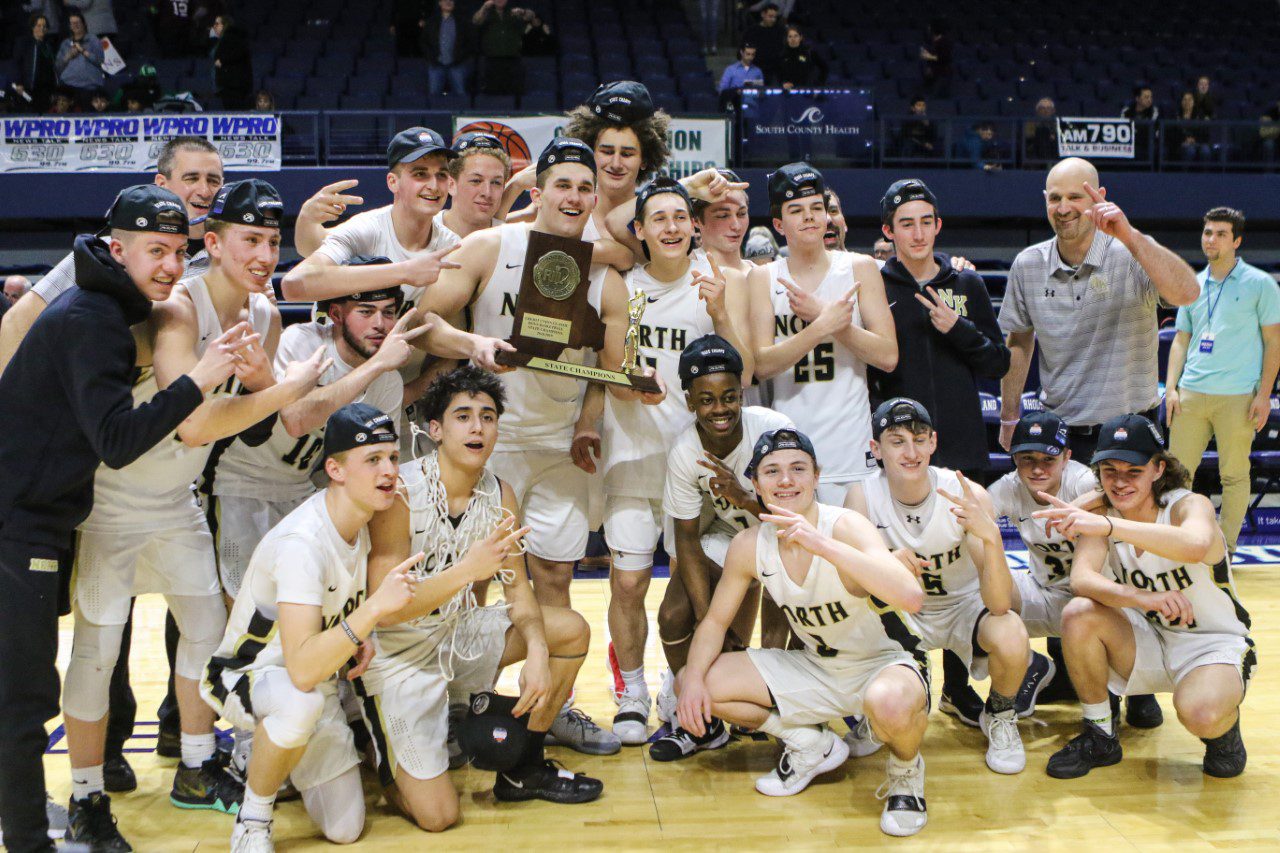 The North Kingstown Skippers getting ready to defend their title

The North Kingstown Skippers are getting ready to defend their State basketball title.

When seen last, the North Kingstown Boys’ Basketball team was running around on the floor of URI’s Ryan Center celebrating their State Championship win over the Woonsocket Villa Novans in what was to be an improbable finish to Rhode Island’s 2019 boys basketball season with the Skippers crowned the new “Kings of the State’s Boys’ Basketball Hill.”

This wasn’t the first time that North Kingstown’s long-time coach Aaron Thomas made it to the state finals, in fact this was their sixth time. Each of the other times they made the finals they were left on the floor watching their opponents celebrate. For Thomas who has been at the helm of the “Skippers” since coming over from Seekonk MA in 1997, his career has been nothing more than amazing. Thomas has put together 22 straight winning seasons at North Kingstown and a massing 407 wins (so far). Known for his “even keel” demeanor, he coaches his team like a coach who has been there before, and he has.

Thomas points out, “we have succeeded as a public school playing in Division 1. The pool of players is small, but we get the members of the team to buy in on our unselfish, team first philosophy.” That point was driven home last season when the Skippers dropped three games in a row. “We had a team meeting after the third straight loss and cleared the air and got refocused on what we were trying to achieve and the goals that we were trying to meet.” It was from that point that the Skippers became unstoppable and began to roll.

To understand Thomas and his low-key coaching style, you must go back to see some of the history that the Skippers went through. Getting to the finals of any state championship is an achievement onto itself. In most cases, coaches will say that getting to the point to play in those games was icing on the cake. For North Kingstown getting the chance to play in that game was a testament to the program that Thomas built. “Getting to play in that game was an honor but walking away 0-5 was really becoming disappointing. In 2002 we were playing Cranston East for the championship at the Providence Civic Center (the Dunk); the game was tight, and the place was electric. We had a two-point lead with seconds left on the clock. East had to come down the entire floor and virtually throw up a prayer. They did, with no time left on the clock Cranston East’s senior captain and All-Stater Soapheeng Toun put up a shot just inside the half court line and with the defender’s hand in his face, the shot found nothing but the bottom of the basket! It was a truly amazing shot and we did everything right; it was one of those games and we came out on the losing end.”

The 2016-17 team was a team that had gone through the fire, getting to the semifinals of the D-1 championship. In the 2017-18 season the Skippers were derailed in the first round of the play-offs by a heavy underdog in Middletown. But the 2018-19 was going to be different, this team entered the season as a senior heavy squad with a lot of experienced underclass men. The Skippers were led by Ben Masse, Dylan Poirier, Nick Quarella, Tristan Curran and Aiden Hindley-Rivera. With an except for the three game “bump” the Skippers were on a roll going into the Division 1 championship tournament.

On their path to the finals stood the talented team from Cranston East, after beating the Thunderbolts, the Skippers turned their attention to the defending state champions the Bishop Hendricken Hawks. The game was a tightly played contest until the Skippers began to pull away. North Kingstown out muscled and dominated the Hawks on both ends of the court. winning the Division 1 State Championship. As the team celebrated and felt that they finally gotten the monkey off their backs. The Skippers knew that there was one more hill to climb and that was the Boys State Tournament.

In recent years the Rhode Island Interscholastic League created a State basketball tournament for the states divisional winners and runners-up to play in a State Championship tournament, this will allow teams from the lower levels to measure up against the upper division teams. It is a tournament where many improbable upsets occur. However, North Kingstown wasn’t going for any of that, the Skippers rolled through the tournament and knocked off Woonsocket to claim the State Championship. The first one in the history of North Kingstown boys’ basketball and for Aaron Thomas, who is quick to credit the players, his staff and the administration for the success the team has had all these years. “It makes things a lot easier when you have built a program where everyone is on board”.  “Clay Brochu stepped up in a big way, being named the Finals MVP scoring 36 points in the finals. In fact, we had four different players be named as “Player of the game” in the run to the championship, Clay Brouchu, Nick Sacchetti, Dylan Poirier and Benjamin Masse. That’s a testament to the unselfishness of that team.” Coach Thomas added.

Asked how it will feel that the Skippers will now be the hunted rather than the hunters? Thomas said without missing a beat, “it’s going to feel different, we know that each game the teams will bring their best and the pressure will be there every night, but if we do our jobs as coaches and prepare them and this years team can go out and play to their ability, we should be alright.” This heavy upper classman team will be ready to play every game. This year’s Skippers include Seniors: John Quainoo, Nick Sacchetti, Matt Reilly, Shane Kenyon, Nolan Bush, Clay Brochu, Geoff Coyne, Mason Walsh, Dan Smith, John “Rock” Deresky, and Caleb Wagner. The Junior members of the team are Liam Ennis, Owen Moynihan, Ethan Harrison, Shawn Murphy and Ethan Smith.

For twenty-three years, Coach Thomas and his staff, Kevin Gormley and James Simmons,  have always done their job and they are why the North Kingstown Skippers have always been a force to deal with on the Rhode Island Boys’ basketball scene for many years and will continue to be for many years to come.