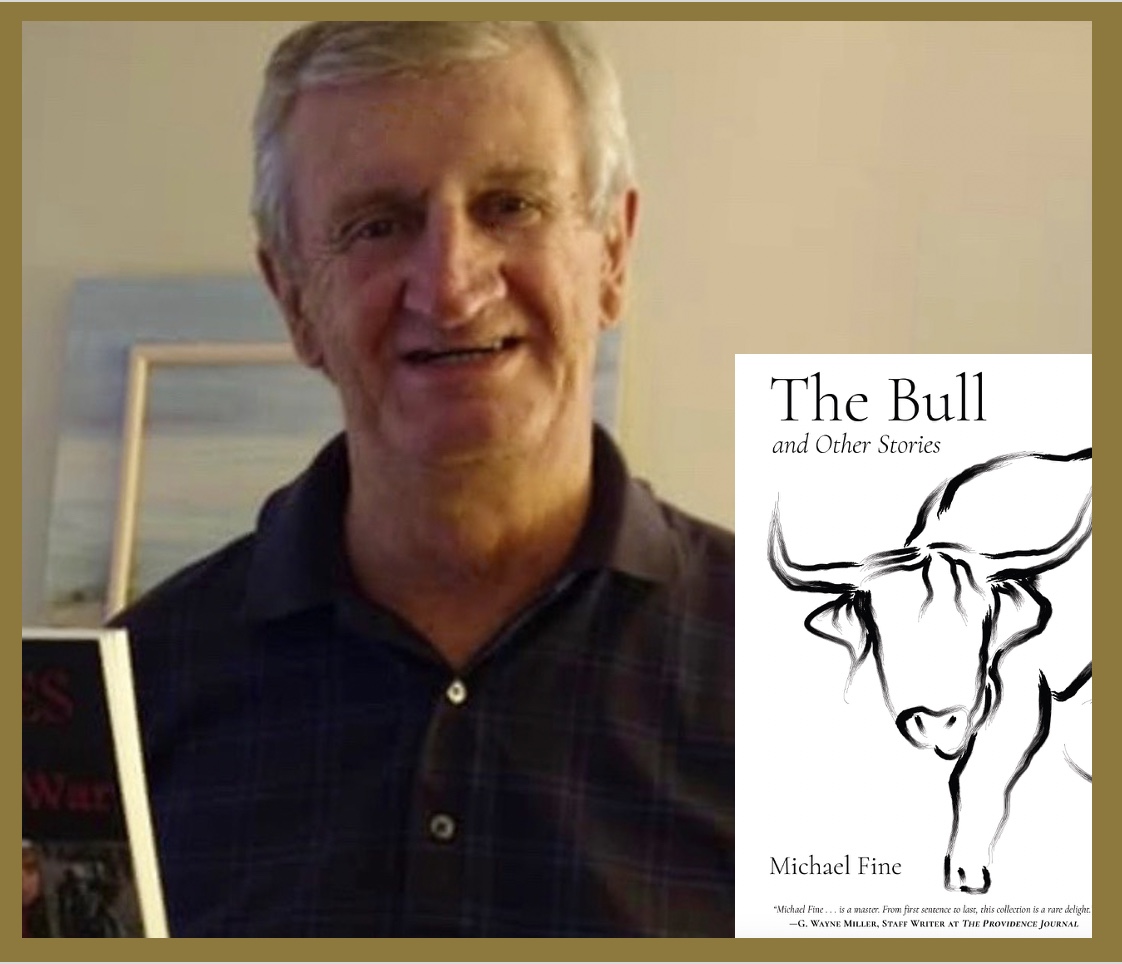 The Bull and Other Stories – a book review by Jim Raftus

The Bull and Other Stories

Aspiring writers attending workshops and nervous college students struggling through Creative Writing 101 will inevitably discuss point of view. At some stage the instructor will scrawl POV across the blackboard, or whiteboard, and the elements of point of view will be dissected.

Who is telling the story?

Who is moving the plot forward?

How clear is the narration?

Surprisingly some successful authors appear to have very narrow points of view in their arsenals; Robin Cook’s story tellers are medical professionals while John Grisham favors lawyers to spin his tales. Even the literary icon, John Updike, displays a POV crutch as many of his narrators are disenchanted suburban husbands.

Rhode Island author, Michael Fine, displays an amazing talent for creating diverse points of view in his newest work of ten short stories, The Bull and Other Stories. Readers are guided through the selections by a wide array of characters, a schizophrenic homeless woman, a tree cutter, a Powerball winner and a physician. Fine imbues his diverse cast with tics and quirks which can only be accurately portrayed by a writer with great empathy and a life of wide experiences.

The author is a well-known long time family doctor. Currently Dr. Fine is Health Policy Advisor for Central Falls, Rhode Island. He has been interviewed several times on national television, most recently on CNN where he described the innovative door to door effort to provide COVID-19 vaccinations to the poorest residents in the densely populated poverty-stricken city. This humanity is visible in much of his writing.

Most creative efforts: fiction, painting, plays… etc. are done with intention. The creators are often using their gifts for a purpose. One of Dr. Fine’s lines in The Bull and Other Stories captures this, “Art awakens the imagination so that we see who we are and who we can be together.” As a political activist Michael Fine has sought to advance equality and the adjunctional benefit of agency. Individuals count. In The Bull and Other Stories many of the protagonists feel neglected and disabused by those in power.

There are many pearls in this collection, “The Bull”, “A Long Way To Fall” and “Anyway” are especially poignant. Amongst the pearls are a couple of pebbles. Oddly, while the strength of Fine’s varied singular points of view works in most stories it is a weakness in a few instances. “The Choke Artist” piece and the awkwardly titled “Bernie Sanders, Elizabeth Warren, Infantile Liberalism and the End of Democracy” suffer from the intrusion of too many points of view. The transitions from one point of view to the next are jarring and confusing. Perhaps multiple story tellers work best in novels. Compacting that task into a short story seems difficult.

The work also could have benefited by some editing or at least a reshuffling in story order. The final line of the third story ends with a slightly amended lyric purloined from Simon & Garfunkel’s song “The Boxer” – “A man does what he has to do and disregards the rest”.

On the first page of the next, totally unrelated story, the line appears as, “A man does what he has to do and disregards the rest”.

One point of view the writer has no control over belongs to the reader. The Bull and Other Stories is a very present-day work. It covers COVID-19, racial profiling, and Trumpism. Fine does a masterful job seeing into the psyche of characters from the left, middle and right political spectrum so a reader’s enjoyment of particular stories may well depend on their own point of view.

The Bull and Other Stories is Michael Fine’s fifth published work and his second work of fiction. It showcases an exciting, expanding talent. His next work is expected in the Fall of 2021.