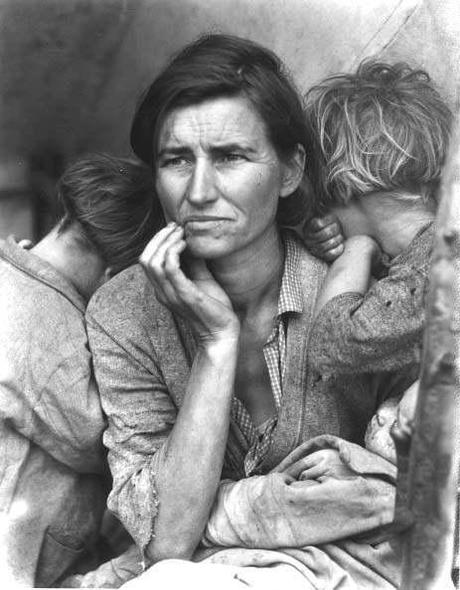 That is what we do here in America. We help people.

(Photo: “Migrant Worker”, Dorothea Lange, from The Family of Man)

She sat in a dark apartment, with her coat on because it was freezing in there, two directors’ chairs that probably came from Walmart, the only furniture in the place other than a twin-sized bed, without a headboard or sheets, but at least it was covered with a blanket in the tiny bedroom.

She had difficulty communicating with us at first, my limited Spanish just enough to let me know she was sick. Tears streamed down her face as she tried to lift herself off of one of the chairs and walk to the stretcher we had at the door, ten feet away. I helped her.

In a way, we all helped her; I was just the arm.

That is what we do here in America. We help people. We have plenty, complain all day about how much the other guy has, but in the end, we’re okay, with a roof over our heads, and enough to eat, and supermarkets full of food, albeit expensive food, but the basics are there, and we can afford them if we want, might have to put the cell phones down for a while and get rid of a few apps, but we can afford to live here, and live well, and still lend a hand.

Yeah, we’ve got our problems, and lots of them, but I’d much rather be part of the society that takes in the fifty-three year old woman in need of life saving heart surgery than be stuck wherever she came from whose culture either cannot afford to, or simply does not wish to care for their own.

We got her to the hospital. Her blood pressure was 78/40, heart rate 140, tears rolling down her face, bloody stool for three days, dizzy, weak and alone. She had had open heart surgery in February, done by the most respected heart team in the area, a very well-known doctor, the lead surgeon. People wait for months for this man.

That a poor woman with nothing was his patient filled me with pride. I must be getting soft, one day I’m on a tirade about illegal immigrants, the next I’m in their living room, proud to be the figurehead of a society that takes them in.

I don’t know, we’ve come to a place where it will be impossible to keep it up. I only hope that the rest of the world catches up with us, morally, financially and compassionately.

And we can all as human beings with similar hopes and dreams and problems take care of our own, no matter from where we came.

Speaking of coming from places, our armed forces have been putting their boots on the ground in countries where we are needed all over the world, for generations.

Did I mention I’m proud to be part of this society? I am, and still wish there was a better way, but we do what we must to get it right, here and half-way around the world, and hopefully, within my lifetime, I’ll start to see some progress toward that end.

Stay safe, Americans, here and wherever we are needed, and stand tall, we’ll do our part to keep this a peaceful, benevolent society with opportunity and compassion for people who need and deserve it.

And I suppose the ones that do not will manage to get theirs, but at the end of the day we will know we have done our best.

They put the lonely woman into intensive care. I still wonder why she lived in an empty apartment with no furniture.