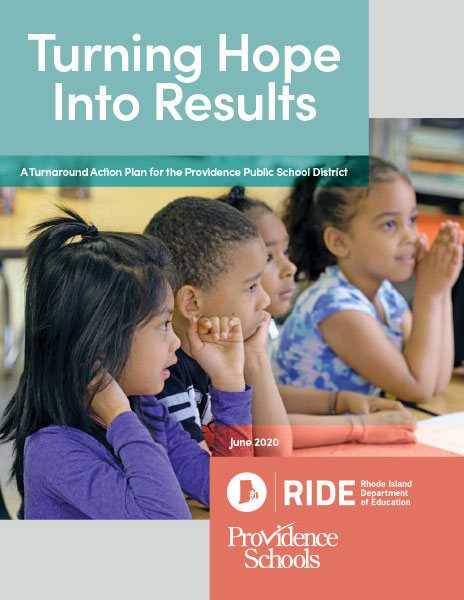 The long-awaited turnaround action plan for Providence Schools is more of a branding and marketing exercise than a detailed, strategic approach

The turnaround action plan for the Providence Public School District, “Turning Hope into Results,” is 68 pages long, but the actual action plan is only 39 pages, with the remaining 29 pages – more than one-third of the document – filled with numerous appendices. [See link below to the document.]

The turnaround action plan document, graphically designed with great care, includes lots and lots and lots of glossy photographs, 40 to be exact, mostly featuring images of eager-to-learn, hopeful students. Four prominently feature Angélica Infante-Green, the state’s education commissioner. That means that 10 percent of all the photographs in the document feature the “outspoken” leader of the Providence Public School District, striking a pose. [In contrast, there is but one photograph of Gov. Gina Raimondo, an image that is inexplicably photoshopped and distorted.]

Translated, the “turnaround action plan,” or TAP, which took nearly a year to complete, should be considered not as a roadmap, nor as a strategy document, but as a well-executed branding and marketing vehicle.

How much did it cost to publish and print? Who was the intended audience? How much were consultants paid to help produce it?

The release of the plan, with a photo of Infante-Green, made the front page of The Providence Journal, above the fold. Mission accomplished?

What the document reminded ConvergenceRI of was the tale told by the national director of marketing for United Way of America, who described the scene at a workplace fundraising campaign event in 1995 at a major corporation outside of Boston, where the hundreds of workers attending the event were all given glossy materials filled with high-minded words of encouragement about “giving” as they entered the room.

The marketing director wondered why there were so many large trash barrels by the exits. He soon had his answer; all the workers attending the campaign rally event quickly deposited the glossy materials in the trash bins as they walked out.

For many parents, teachers and community advocates, the long-awaited “turnaround action plan,” much like the glossy materials distributed to workers at a United Way workplace fundraising campaign, is a document that seems destined for the trash bin.

As one parent told ConverenceRI, who had been a participant in a community design team, the turnaround action plan was filled with a lot of “hoo hah,” but totally lacking in specific strategies on how to achieve the aspirational goals and metrics.

A stake in the ground
In terms of messaging, the photo of Infante-Green, in front of the “promise” sign, taken at the Rhode Island Foundation’s education stakeholder event on Dec. 7, 2019, which drew several hundred participants to the R.I. Convention Center, with a pull quote attached, said it all: “This Turnaround Action Plan is a stake in the ground – a bold commitment to drive, measure, collaborate and share with the community the changes taking place in PPSD.” [See link below to ConvergenceRI, “Making it happen in Rhode Island.”]

The proverbial stake in the ground, however, appears to lack any detailed substance to back up the lofty rhetoric.

The turnaround action plan is based upon three pillars: engaged communities, excellence in learning, and world-class talent. There are four core values: students first, equity and access, transparency, and results. An additional foundational principle to guide the transformation is: efficient district systems. [Editor’s Note: That is the essential core of the turnaround action plan, laid out in one paragraph, in 42 words.]

The plan lays out a series of metrics and expectations, such as:

• “Increase the expectation of students to be present 90 percent of the school year, improving the current rate of 62.7 percent, to address chronic absenteeism

It’s a worthwhile metric to achieve, no doubt. The problem, of course, is that the metric does not address the major underlying root cause of chronic absenteeism, which is the high prevalence of asthma in Providence, which in turn is caused by poor conditions in school buildings, poor housing conditions in many Providence neighborhoods, the continued presence of lead paint in the housing, and increased air pollution burdens associated with environmental and racial disparities.

Highways are not likely to be rerouted, but plans for proposed waste transfer stations on Allens Avenue can be halted. Aggressive action by the R.I. Attorney General’s office can force polluters such as Sprague Resources and its storage tanks to limit their emissions of volatile organic compounds. The work of Julian Drix at the R.I. Department of Health to address health disparities around asthma can be supported.

One potential practical solution, adopted by the Vartan Gregorian Elementary School, would be to install advanced air ventilation systems to protect students from air pollution in every single classroom. In California, where a community installed air ventilation systems after a massive gas leak, studies found that student performances improved on a par with lowered class sizes.

Deploying such a strategy would certainly fit within the four core values of the turnaround action plan: students first, equity and access, transparency, and results.

• Increase the percentage of students meeting or exceeding expectations on the Math SAT [taken in Grade 11], from the current 14.6 percentage to 54 percent.

Once again, it is certainly a worthwhile metric to achieve. The problem, of course, is that it ignores the evidence of ongoing research conducted on Providence students that childhood lead poisoning is a major factor in lowered math scores in African-American children. To improve the metric for better achievement on standardized math testing, the most effective strategy would be to remove lead and reduce childhood lead poisoning in Providence.

A second major problem in focusing on SAT performance metrics is that the SAT tests are being eliminated as a performance standard for admittance to colleges and universities. In May, the governing board of the University of California decided to eliminate SAT/ACT as a requirement for admission.

As a result, the metrics being established by the Rhode Island Department of Education under the Turnaround Action Plan for the Providence Schools are dedicated to a standardized testing regimen that may already have become outdated and obsolete.

Multilingual learners
One of the biggest problems with the Providence Public Schools is the increasing presence of English language learners in the school system, reflective of the overall demographic trends in Rhode Island and in Providence, where minority children will soon become the majority, according to the latest Rhode Island Kids Count Factbook.

As ConvergenceRI reported, more than one-third of the current student body attending Hope High School at the beginning of the 2019-2020 academic year were English Language Learners, dubbed “multilingual learners” in the turnaround action plan.

The ConvergenceRI story reported that, at Hope High School: “There were some 812 students who were enrolled in grades 9-12 at the start of the 2019-2020 academic year, according to available data sources.” [See link below to ConvergenceRI story, “Is this what success looks like?”]

The story continued: “More than one-third – 326 students – have been designated as English Language Learning, or ELL students. That number grows to 449 if it includes all the students who were designated ELL students. Some students have waived services but may still need annual testing.”

Further, the story said: “Translated, that means that more than half the students currently enrolled at Hope High School are being monitored for their English language proficiency. That is a big number of students. The average class size for teachers working with ELL students was estimated to be around 27 students.”

The problem at Hope High School is the same problem throughout the Providence Public School District: there are too many English Language Learner students, not enough teachers and an inability to adapt a curriculum to meet the needs of students who fall behind.

Within the vision articulated in the turnaround action plan, multilingual learners occupy a prominent rhetorical position:

• “We envision a PPSD where every student is enrolled in a modern classroom, equipped with the technology and resources needed for academic and social and emotional growth, all multilingual learners are taught by State-certified teachers [emphasis added], all teachers in the District are empowered and motivated, PPSD graduates are fully prepared for postsecondary success, students, families, and civic leaders have confidence in their schools, and the Providence community feels and shows immense pride in their local public schools.”

According to the turnaround action plan, “RIDE will establish a range of opportunities to develop competency, certification, and continuing education for teachers and school leaders, particularly for MLL classrooms [emphasis added].”

• In terms of metrics, the turnaround action plan calls for an “increase in the percentage of students who are meeting their annual MLL targets on the ACCESS assessment from the current 37.8 percent to 67 percent” in the next five years.

Again, it is a worthwhile metric to achieve. The problem, of course, is that the current curriculum does not provide any capability to deal with English Language Learners who have fallen behind – or the resources to assist them in the classroom, according to a number of teachers who spoke with ConvergenceRI.

All the lofty rhetoric in the world – and all the glossy documents produced – will not change the economic reality in the classroom.

No longer a hidden agenda
One area of transparency that the Turnaround Action Plan illuminated, perhaps for the first time, is the fact that Commissioner Infante-Green and the Providence Superintendent Harrison Peters are both members of the group, Chiefs for Change, originally championed by former Florida Gov. Jeb Bush, and that the group is playing a large role in the development of the future plans for the Providence Public School District.

Under the subhead, “Chiefs For Change,” the plan states: “Members of Chiefs for Change share a vision that all American children can lead fulfilling, self-determined lives as adults and that access to excellence is access to opportunity. Chiefs for Change has been engaged in the turnaround effort in the Providence Public School District from the beginning, and both Commissioner of Education Angélica Infante-Green and Turnaround Superintendent Harrison Peters are members. The organization has been a critically important thought partner and supporter throughout the development of the Turnaround Action Plan, with particular thanks to Julia Rafal-Baer [the chief operating officer of Chiefs for Change].”

What pandemic?
Everything in our economy, in our health care system, in our day-to-day lives has been turned upside down by the coronavirus pandemic. One would expect that the turnaround action plan, “Turning Hope into Results,” would at least address the challenge of the coronavirus pandemic to some degree as part of its planning process. To quote the late John Belushi: “But no!”

The lack of even one paragraph to address the uncertainty about returning to in-person learning in schools in Rhode Island seems as much an error of commission as an error of omission, in ConvergenceRI’s opinion.