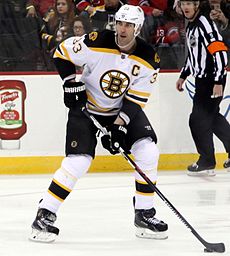 The news hit like a bolt out of the blue to many, the Boston Bruins and Zdeno Chara had parted company. Chara had been a fixture in the Bruins for 14 seasons, for all of that time, serving as the team’s captain, a position that is not freely given. The title commands respect of both teammates and competitors, alike. It was a title that fit him perfectly, a low-key player who let his actions on the ice speak for themselves. But it was the way he carried himself off the ice that gained him the admiration of everyone who encountered him. This only made the news more surprising, or even stunning. The fact of the matter was that Zdeno Chara was no longer a Boston Bruin, and just like that the Boston professional fan base had been dealt another blow; the second within a year.

A player in the NHL since 1997, Chara signed a one-year contract with the Washington Capitals. The question is why do these iconic professional players leave Boston to extend or end their careers elsewhere? Wade Boggs left the Red Sox to head to the New York Yankees and win a World Series; Tom Brady left the Patriots only to put his new team, the Tampa Bay Buccaneers, in a position to make a Super Bowl run, and now the Boston Bruins wanting to go in a different direction, parted ways with their 43-year-old captain.

For us as fans, it is hard to say goodbye to these players. They have become our guys, the guys that we stood by and rooted for through thick and thin. We stuck by them when we won championships, or made a play-off run, or even when they were also-rans. No matter how much business sense this may make, they are still our guys, and watching them leave is a hard thing for us fans to do.

It is hard to imagine the path that led the 6’9” defenseman here from Slovakia (part of the Soviet bloc known as the Iron Curtain), where talented athletes competed for their country as they made their way through mandatory military service. As the restrictions began to erode and northern European athletes were allowed and encouraged to play professionally, Chara found himself drafted by the New York Islanders in 1997 as he was drafted in the 3rd round as the 56th selection overall. All through his four-year career with the Islanders, his role never grew much from a defensive player to an offensive threat. In 2001 Chara was traded to the Ottawa Senators. It was with Ottawa that Chara began to establish himself more on offense and as an All-Star, having one of the hardest and fastest slap shots in the league. But more importantly, Chara established himself a Norris trophy candidate for being the league’s best defensive player on an annual basis.

During the 2004 lock-out that derailed the entire NHL season Chara’s contract expired and he could not come to terms with Ottawa and as a free agent Chara signed with the Bruins the first day of free agency. During his time in Boston, his career blossomed both as a tough defenseman, an offensive threat and he found himself on the ice killing penalties and as an intimidating force. Each of Chara’s season’s in the NHL his numbers improved both in goal scoring and assists, often among the leaders in each category and his penalty minutes were among the lowest on the Bruins. Chara became a permanent fixture in the NHL’s All-Star game and he and the Bruins were frequent participants in the NHL’s play-offs. It was in 2010-11 where Chara reached the very top of the NHL’s mountain when he became the player born in a country behind the Iron Curtain to Captain and lead their team to the Stanley Cup championship. The team captured the imaginations and admiration of hockey fans and non-hockey fans alike. The perfect mixture of talent and a goal tender who stopped everything that came his way, Chara was the silent leader who let his steady performance speak for itself. When he lifted the Stanley Cup over his head to be the first player (as tradition dictates the team Captain gets to take the first victory lap with the cup), Chara lifted the entire Northeastern region over his head and for all Boston Bruins fans, far and wide. Chara was the guy who earned it the most and he represented to everyone what a true leader was; what a true Captain was.

Under his leadership and title of Captain, Chara had led his Boston Bruins to three Stanley Cup final winning ones, he became the oldest player to ever score a goal in a Stanley Cup final and still has one of the fastest and hardest slap shots ever recorded. His professional resume reads like this; 6-time NHL All Star, the winner of the NHL’s Hardest shot competition five times topping out with a shot recorded at 108.8 mph. In 2009 he won the NHL’s James Norris Trophy as the league’s best defensive player. In 2013 The Hockey News gave him the John Ferguson Award as the toughest player in the NHL. Named a member of the NHL’s All decade team from 2010-19 and to the IIHF All-Time Slovakia team.

The cold fact is that professional sports is all about the bottom line and when a player comes and joins your favorite team, you are asked to support that player. You are asked to purchase that player’s jersey and a ticket to go see that player play. The organization’s investment is monetary where a fan’s investment is emotional, and this is never considered when the organization makes the decision to part with that player. If you have your doubts, you can look behind Chara to Tom Brady.

Professional sports are a cold, cold business. Chara will be the only local sports hero to leave in the same fashion and we will wish him well and continue to cheer for him with his new team – only when he is not playing against the Bruins. It is also our hopes when the Captain hangs up his skates for good, that the Bruins will sign him to that infamous “one day contract” and he retires a Boston Bruin with all the fan are that goes along with it, including a “Zdeno Chara Night” at the Boston Garden as we celebrate him hoisting his number “33” to the rafters along side all the other Bruins greats. It will be a fitting end to a great career and to show one of “our guys” that he will always be one of “our guys”.

John Cardullo is a lifelong Rhode Islander. His sports experience is extensive, as a player of youth and high school sports in Cranston, Rhode Island, a coach, and the Public Address announcer for several local High Schools over the last 16 years for Cranston East, Cranston West, Central, and Scituate as well as CCRI Men’s and Women’s Soccer.

In his spare time John is a Softball Umpire in Warwick and for 56 years he has been active in Men’s Slow Pitch softball and was inducted into the Rhode Island Slow Pitch Softball Hall of Fame in 2019. John has been in the Printing industry for over 42 years and currently is the managing partner of Coastal Printing & Graphics Inc.