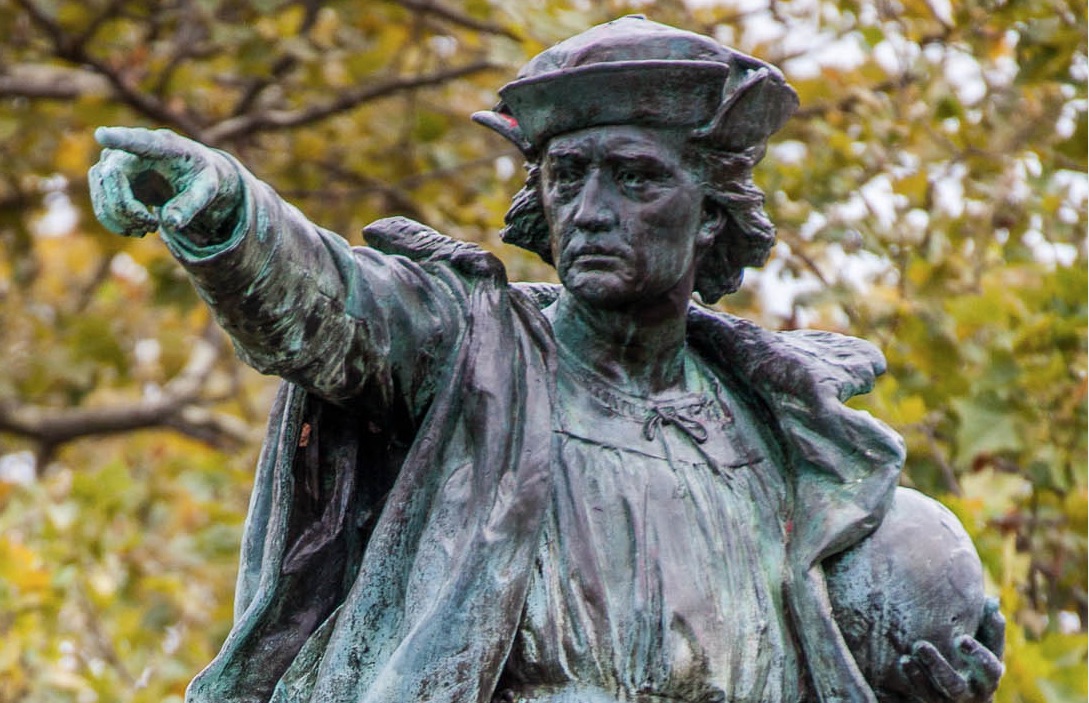 Save the statues – by David Brussat

by David Brussat, Archiecture Here and There, opinion

This particular statue of Columbus is a bronze cast of Frédéric Auguste Bartholdi’s statue cast in silver by the Gorham Co. for display at the 1893 World’s Columbian Exposition in Chicago. Bartholdi had previously sculpted the Statue of Liberty for New York Harbor. An article that year of 1893 in the journal Inland Printer described the art of his Columbus: “Life and vigor are implied in every line and feature, and the general effect is one of great beauty.” Its artistry is evident in the photo at the top of this post.

My dog in this current fight over statuary is largely aesthetic. I defend this Columbus because his statue is classical and beautiful. Although the statue aims to remind us of his bold voyage of discovery in 1492, when most Europeans, including many of his crew, feared that they would sail off the edge of the flat earth, my observation of this and other statuary takes the form mainly of thoughts generated by their quality as works of art.

I understand and sympathize with those who are concerned by Columbus’s sins as a colonizer. I don’t think those sins warrant defacing his statue or knocking it down. It is a reminder of an important part of our American history. This and other statues, including those of Confederate generals, are part of our history. Removing them would erase part of our history, hurtful especially to those who do not normally study that history, many of whom experience statues as an inert decoration that may grant them a passing pleasure. (Perhaps I fall into that category.) Removal would make their lives and mine shallower. They (we) are people, too.

Any statue’s removal should be undertaken only by its public – local, state or national – in a process of civilized democratic deliberation.

The reaction to statuary covers a range of feelings, from my largely aesthetic ones to understandable feelings of anger caused by the iconic reminder of, say, colonialism or slavery. But my guess is that those are rare. Feelings are pitched high these days, ginned up by events in the news, but I suspect that most people passing by a statue of Robert E. Lee in normal times would not feel anger or rage but, at worst, sadness or depression. They feel intuitively the symbolic meaning of the statue, and its implications for their lives.

In such feelings reside the importance of statuary to the individual experience of history. Nobody denies that history hurt some more than others, blacks and natives more than whites, but getting rid of the statues would rob these individuals of an important connection to their past and an incentive to desire or even, let us hope, to work for positive change. Nor would such removal do much to bring about the comity required to assist progress in resolving the ills that spring from our history.

Whatever the degree of anger over society’s continued hangover from slavery and Jim Crow, it cannot be denied that significant progress has been made toward the equality sought by our founders and emblazoned (for the first time in human history) in the documents of our foundation, and ratified by the blood of hundreds of thousands in a civil war fought to end slavery. That progress of a century and more was made in the company of more than 1,800 existing statues and memorials of Confederates or the Confederacy. Will their removal now add to the likelihood of further progress? Certainly not.

Rage has removed many statues in recent weeks. A large number of the statues under attack honored abolitonists, Union generals, President Lincoln and others dedicated to ending slavery, or who had nothing to do with slavery or, for that matter, with George Floyd. Indeed, rioting wrecked a unified belief held by all Americans that Floyd’s murder was a tragic wrong, and that justice should punish his killers. The riots destroyed that unity, that comity which might have been the result, and destroyed what progress might have arisen from peaceful marches seeking justice. The destruction of statues that have nothing to do with slavery has only made it harder to promote society’s effort to address police brutality and other injustices.

It has been noted that the incoherence apparent in the destruction of statues that have nothing to do with slavery reflects the ignorance represented, today, by the average college degree. I’d go a step further and say that the current iconoclasm is the first in history, or at least American history, where the intellectual capacity of those who attack statuary – mostly young, white and college-educated – is smaller than the intellectual capacity of those who don’t support that attack: the average American citizen.

Over the past few decades, the learning and the understanding conveyed by four years or more of higher education renders degree holders, in many fields of study, less capable of intelligent thought than those without degrees. In the field of architecture, for example, the public in its intuitive skepticism of modern architecture is more sophisticated than are the holders of almost all degrees from schools of architecture. This has been true for generations. It’s odd to say that the most educated members of society know less than the members of society generally, but that is the situation we face, with the attack on statues only the latest example of the broader decline in education and expertise. The wisdom of the masses now often bests that of the highly educated, but the masses lack power to bring fake expertise to heel.

But I don’t believe that this ignorance is the primary cause of the apparent incoherence of the attack on statues. Rather, not ignorance but calculation is behind that attack. The rioting and iconoclasm have been falsely predicated on the protests spawned by George Floyd’s murder. And the incoherence of the attacks is only apparent. The true cause is hatred for western civilization as manifested in America by its history, its institutions and its symbolic icons – including statues. The forces behind this destruction target the foundations of society itself. Statues are merely the easiest to find and attack, especially when timid police departments stand aside. Our difficulty grasping that reality is what causes this seeming incoherence. How convenient!

What better time for these forces to act than amid the re-election campaign of a president both widely hated and deeply admired, an opponent widely considered corrupt and incapacitated, global pandemic, economic meltdown, riots and the worst political scandal in American history? Current events have set up an unprecedented host of potential societal collisions. This has shaken confidence in the ability of our national institutions to guide and protect us. When we are at our weakest is when we are most likely to be attacked. Aside from the Civil War, our history has seen no period of greater vulnerability. (Let’s hope that our troubles will remain domestic.)

In spite of this, as the attack on our imperfect but striving society mounts, institutions public and private throughout the nation are surrendering their honor and dignity in mostly feigned apologies and mea-culpas. Their empty pledges are just words meant to deflect anger. Panic fanned by a complicit media fogs the sense of moderation and self-preservation that once prevailed among our most respected institutions. The reluctance to defend statues is just one instance of society’s refusal to defend its own honor.

The United States and its institutions have brought more progress to more people of all races, creeds and ethnicities – progress in health, in wealth, in safety, in freedom and political representation, just to name a few – than any previous society. Its founding documents erected high standards – equality and justice for all – and Americans have worked harder than the citizens of any other society to reach them. We’ve never claimed to be perfect, and yet hopeful immigrants continue to seek to live in our nation, warts and all.

The public stands foursquare against letting mobs topple statuary, and the protection of those statues can now serve as a rallying point in the defense against genuine enemies of our society, our nation, civilization itself – the good, the true and the beautiful.

Christopher Columbus should not have been removed by fiat of the city from Elmwood Avenue, but ought to have been allowed to remain so that its neighbors and the good people of Providence could have the opportunity to defend both him and the great civilization for which he stands – great for having proved its capacity, despite its flaws, to strive for the unprecedentedly just and equitable goals of our national foundation.

We in Providence still don’t know where the statue is now stored, or what fate will be administered by the committee that has apparently been formed to adjudicate its future. Its members are probably already suffering from the Stockholm syndrome. But maybe not. You never know. May history preserve Columbus from the deliberations of our self-appointed experts!

I would be even happier to see him moved from Elmwood Avenue to Federal Hill, former sanctuary for the city’s historic Italo population and today a mecca of restaurants. There I’d be able to enjoy looking at him more often. And there would be more police around to protect him, especially if he stood tall in DePasquale Square (al-fresco dining at its finest). Is Federal Hill up to the task? Heavy responsibility! It seems rattled by the uncertainties involved.