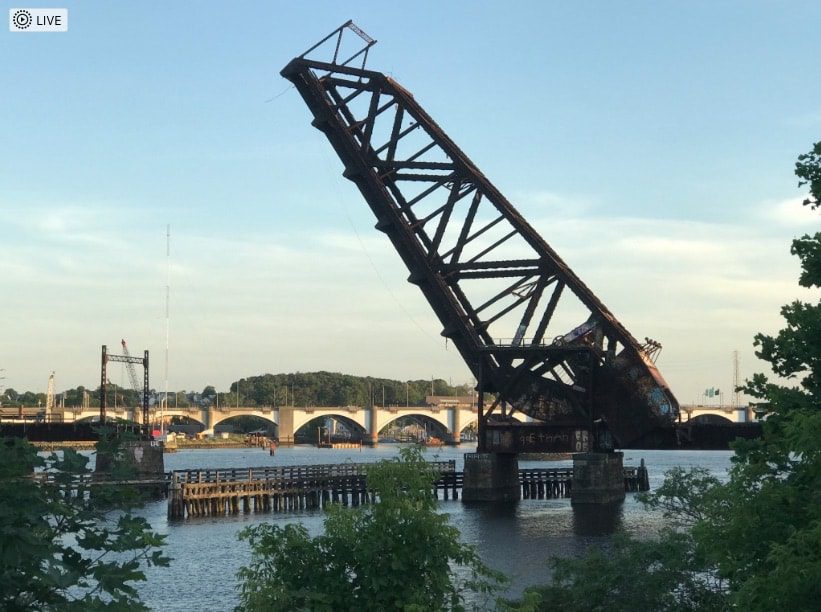 Save the Crook Point Bridge

Save the Crook Point Bridge

Call me a stick in the mud, but climbing the 111-year-old Crook Point Bascule Bridge stuck in the up position since 1976 is not on my bucket list. However, since the last train chugged across the Seekonk River, pimpled daredevils in their uncounted swarms have made the rusty trek aloft sans sherpas, imperiling their own lives. Last year, the state of Rhode Island quietly decided to demolish the dangerous eyesore and nuisance.

Excuse me. I say it is art.

For me this goes against the grain. I prefer art that takes pride in beauty. Still, the bridge is central to the picture-window view of my dear mother-in-law from her comfy new apartment at the Wingate assisted-living center, overlooking East Providence from next to the IGA, now known as the Eastside Marketplace. Without the Crook Point Bascule Bridge saluting Agnes (Dr. Somlo to you) from downriver, I’m not sure she would feel as happy with her recent residential downsizing. Certainly the joy of my own frequent visits with Billy and Victoria would diminish, slightly, without the iconic centerpiece of her view to partake.

The old bridge is no less art than a nicely framed painting above the sofa.

The Journal’s Patrick Anderson reported today in “R.I. puts Providence’s distinctive drawbridge down for demolition” that the state plans to spend $6 million to get rid of the bridge, perhaps by 2027. “But the longer the bridge has thrust awkwardly into the sky between Providence and East Providence,” writes Anderson, “and the more decrepit it’s become, the more distressing the idea of losing it seems to many in the area. The bridge’s dark silhouette has been screenprinted on popular T-shirts, its symbolism of urban decay studied at Brown University and its rusted metal tagged by graffiti artists.”

See? The Crook Point Bascule Bridge is art. Even the Journal says so.

But if you still doubt that it should be saved, consider a state transportation project that RIDOT is now fast-tracking. I refer to the demolition and replacement of the Henderson Bridge, just upriver from the Bascule. Six million dollars could turn its underwhelming initial design into something much nicer, featuring a structural arch or a set of elegant pylons. Or it could help finance a shift that would bring the bridge over the narrowest stretch of the Seekonk, enabling the reconnection of Providence’s Waterman Street to East Providence’s Waterman Avenue. They end across the river from each other; their remarriage could be the beginning of a beautiful relationship, if developers are encouraged to build nice communities along each embankment. (See “Make Mr. Highways smile.”)

Whether for the purposes of art or urban design, the bridge should be saved. And if not for that, then to prevent the stupidity of throwing $6 million away for nothing. (Which sounds more in the policy line for RIDOT since the end of its glory days of moving railroads, moving rivers and moving highways, just a decade or two ago.)

No. Rhode Island’s Mt. Everest should be preserved.