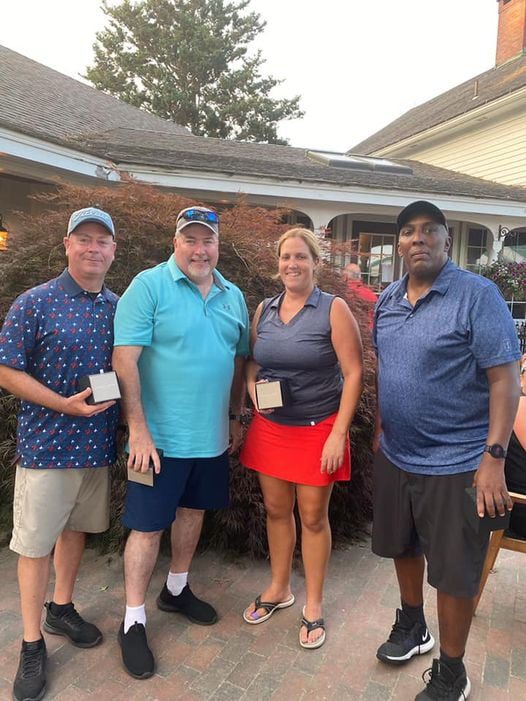 The Rhode Island Slow Pitch Softball Hall of Fame kicks off its fundraising season on the links, making a stop on the diamond and finishing up with a double induction ceremony in the fall.

The Rhode Island Slow Pitch Softball Hall of Fame kicked off their fundraising season on August 14th by hosting their 2nd Annual R.I.S.P.S.H.O.F. Golf Outing. 108 golfers converged on the Exeter Country Club located in Exeter, Rhode Island, to show support for this four-year-old organization that pays tribute to the men and women who have excelled and rising to the top of a sport that had taken hold back in the 1950’s and is more popular today than it’s ever been.

The organization’s roots were suggested in 1997 when an article was published in the popular softball publication, The Fielder’s Choice. It had laid dormant for 20 years before a group of softball movers and shakers held a meeting and decided to launch the Rhode Island Slow Pitch Softball Hall of Fame. “The business of starting a venture such as this was more complicated than we realized,” said the organization’s Vice President, Bob Berard. “We had to file as a non-profit entity and organize ourselves with officers and come up with an executive board. There was a lot of things to doing this before we could begin.” But in November 2018, the first induction class entered the newly formed Hall of Fame. The first induction class was held in a full house at the Cranston Country Club had 33 members get inducted into the Hall of Fame.

The organization had to move to Warwick’s Crowne Plaza for the 2nd Induction dinner. 400 people were in attendance as 24 members were ushered into the Hall. Then, the 3rd annual induction dinner was postponed because of the Covid-19 pandemic. “It was decided that we were going to induct the 28 class of 2020 but hold a combined dinner this year with the class of 2021,” said Secretary and Golf outing Co-Chairman Scott “Stump” Sunderland. Sunderland who was also elected to the class of 2021 will be inducted into the Hall of Fame himself in November. “The Class of 2021 will induct 25 more inductees, bringing the four-year total to 110 Hall of Famers.” Berard added.

The Golf Outing which was moved this year to Exeter Country Club was also set in August and was greeted by record heat. The 97-degree temperature did nothing to discourage the golfers as they teed off for their one o’clock shot gun start. The players were a mixture of Hall of Famers from each class, supporters of the organization, and  just hard-core golfers whose motto is “if you hold it, we will play.” Sunderland said, “It was hot out there. I was on one of the contest holes and as the players were coming up to the tee box, there was not on complaint. I was often greeted with a smile, a comment that they were having a great time. It was evident to see that everyone was having a good time!” Sunderland’s wife, Donna, who is also a member of the Hall of Fame, and Hall of Famer Phil Deluca were running around taking photos, organizing the raffles and making sure everyone stayed hydrated. “It was a true team effort!”

The event itself received high marks from the golfers who were greeted with a steak fry dinner complete with all the fixins’ as they finished their round of golf with prizes for the top four placed teams, winner for the on-course contests such as longest drives, straightest drive and closest to the pin for both men and women. The outing raffle prizes had 40 prizes for those lucky participants. One golfer stated that “I play in many of these events every year and I have to say this was a first-class event!” He added, “it may have felt that we were playing on the surface of the sun today, but we all had a great time. The play flowed, the food was great, and the prizes that were awarded or won were top of the line!” committee member Anthony Calabro added, “We had a committee that worked hard to make this outing a successful event, and the sponsors that made things a lot easier, from the on-course tee signs to the sponsors of the outing itself made things very easy on the committee and we want to thank them for everything they did to help us out.” Plans for the 3rd annual golf outing are already underway and details will be released after the new year.

The next event for the R.I.S.P.S.H.O.F. will be the 4th Annual Softball Tournament that will be held on Saturday, October 9th at Warwick’s City Park. Executive board member and the tournament’s co-chairman, Nancy Santropardre, said, “This event is a very popular one, because many of the inducted members come out to support the tournament. It’s like a Hall of Famer reunion. Plus, they get to see how the game has changed from when they played. It’s a great time!”