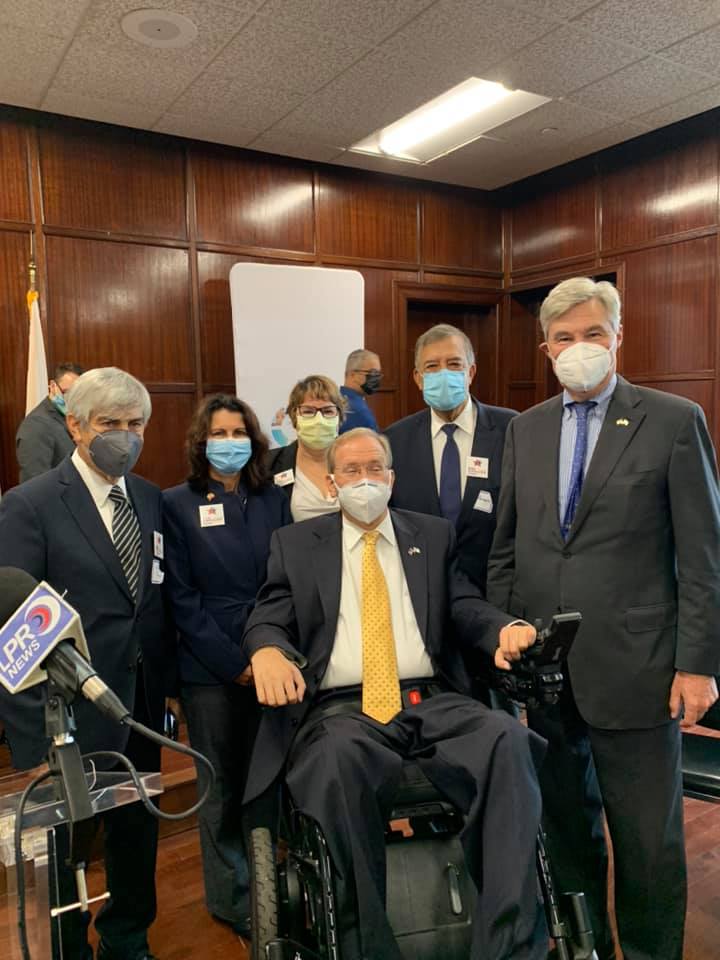 RI Captains of the PALCUS Make Portuguese Count in the 2020 US Census Campaign were on hand at a thank you reception hosted by Senators Jack Reed (RI-D) and Sheldon Whitehouse (RI-D) and Congressmen Jim Langevin (RI-2, D) and David Cicilline (RI-1, D) in Central Falls on October 4th.

The purpose of the reception was to thank all members of the various Rhode Island communities for their efforts in a successful complete count in Rhode Island.

Thank you to all the wonderful Captains in helping to spread the word and Making Portuguese Count!!

The US Census will be releasing the Portuguese data in the spring of 2022.

History of Portuguese settling in RI

The New England Historical Society notes that: “Two great waves of Portuguese immigration gave Southeastern Massachusetts and Rhode Island the densest concentration of people with ancestry from Portugal, including the Azores and Cape Verde.

They made their mark with restaurants and bakeries, with fishing fleets, with Roman Catholic churches and with the Boston Red Sox. Dustin Pedroia, Jonny Gomes and Shane Victorino all have Portuguese ancestry. So do actor Tom Hanks, U.S. Sen. Jack Reed.

Portugal also produced John Philip Sousa, who composed that most American march, Stars and Stripes Forever. And Emma Lazarus, who came from Portugal, wrote the inscription on the Statue of Liberty.

Until about 1870, whaling drew Portuguese sailors from the Azores and the Cape Verde Islands. Poverty and military service sent them. They signed on for low-paying, dangerous work on whale ships. Then they settled in whaling communities in New England, California and Hawaii.

Portuguese families started to come to the United States in larger numbers around 1870 just as the whaling industry began to decline. They worked in New England’s booming textile mills, in whaling and fishing. And the women worked as seamstresses in garment shops.

In the late 19th century, many Portuguese, mainly Azorean and Madeiran, settled in Providence, Bristol and Pawtucket in Rhode Island. They also settled in New Bedford, Taunton, Fall River, Gloucester and Provincetown in Massachusetts. And they moved to Hartford and New Haven in Connecticut.

“It was easy to get into this country in those early days,” wrote Portuguese immigrant Lawrence Oliver in his autobiography. “America was a free port. To get in, all you needed was a little money in your pocket, so that the authorities could be sure you wouldn’t be destitute and on relief right away.”

Massachusetts has the second densest concentration of Portuguese immigrants, with 6.2 percent. Connecticut ranks fourth, with 1.3 percent, mostly concentrated in the Hartford-West Hartford-Willimantic area.

But the majority of Portuguese Americans in New England cluster in Southeastern Massachusetts and Rhode Island.

Forty-one percent of East Providence residents claim Portuguese ancestry. So do at least one in five residents of Bristol, Warren and Tiverton.

Though Rhode Island has the densest Portuguese population, it only has the third largest. Massachusetts has more Portuguese residents with ancestry from Portugal than any other state in the country. About 320,000 now live in the Bay State, according to estimates of the 2010 Census. Fall River, Mass., has the densest concentration of Portuguese Americans in the United States — 43.9 percent. And Portuguese Americans make up at least a third of the population of North and South Dartmouth, New Bedford, Dighton and Somerset.”

Years ago “Portuguese” was a classification on the US Census – while assimilation was a goal of the new settlers to Rhode Island, we no longer count Portuguese, officially, in the Census – the PALCUS initiative encouraged Portuguese people to write in “Portuguese” in the “other” category (and not to check Hispanic, which they are not) so an accurate counting can begin to be made.

Rhode Island remains the most dense population of Portuguese in the US.

The Minority Business Enterprise program in Rhode Island recognizes “Portuguese” as a specific classification. In the past few years, Rep. Anastasia Williams has attempted to delete Portuguese as a category – all attempts have failed with legislation being returned for further study. PALCUS has been at the forefront of efforts to raise awareness, and defeat this effort.

PALCUS celebrates its 30th anniversary in America this year.

EDITOR’S NOTE: To read more articles of interest in Portuguese in Rhode Island – go to: RINewsToday.com and put the word “PALCUS” in the search bar….