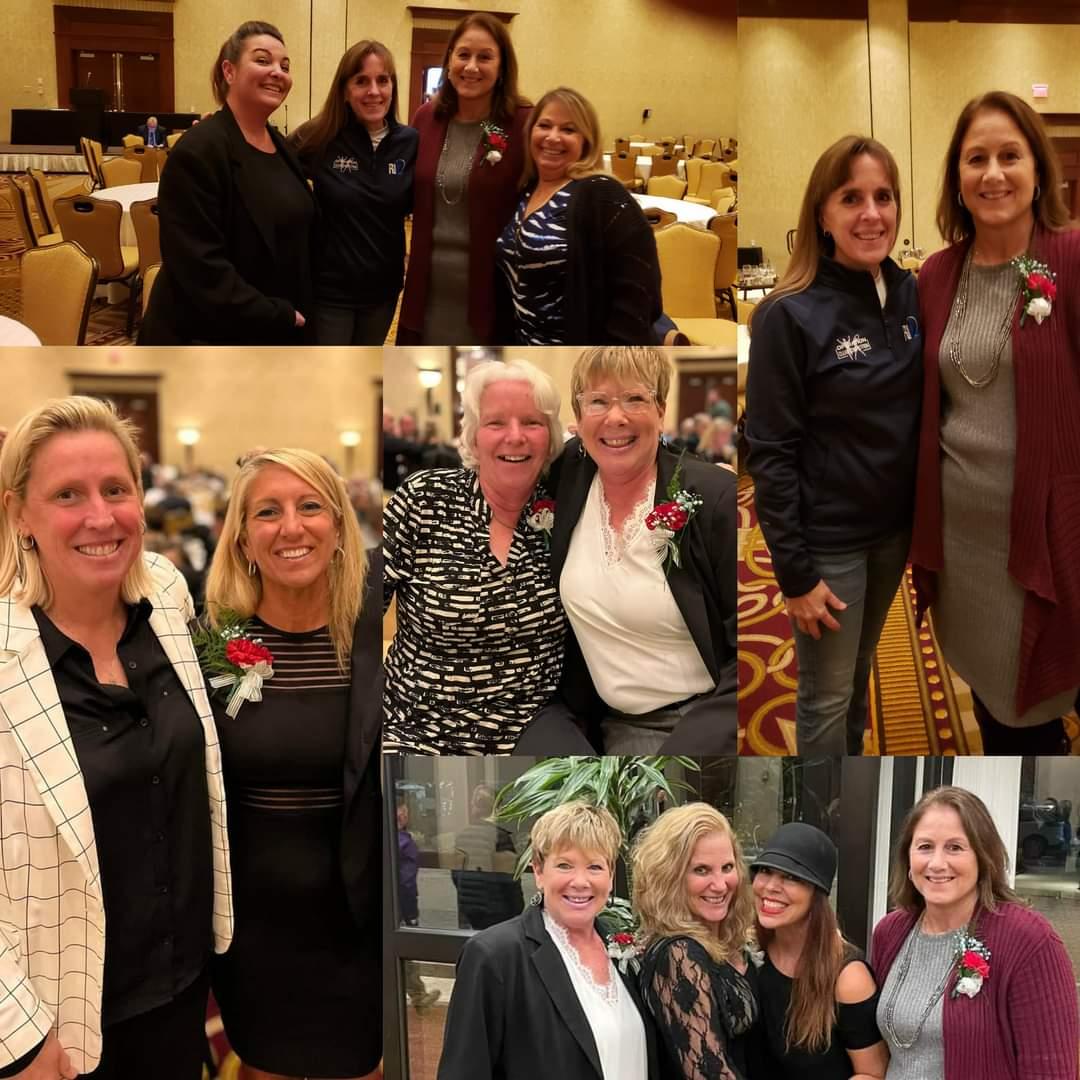 The Rhode Island Slow Pitch Softball Hall of Fame welcomed 52 new inductees on Saturday, November 20, 2021. This was a combination induction celebration that brought together the class 2020 and 2021 together after last year’s postponement due to the pandemic that gripped the world.

Warwick’s Crowne Plaza served as the host site for this year’s event. 460 guests attended the dinner that was two years in the making. Players in both the Women’s and Men’s category, Coaches, Directors, Umpires and Sponsors were honored and ushered into the State’s only Hall of Fame. The original idea of a Statewide Softball Hall of Fame was written in an article that first appeared in the State’s only publication “The Fielder’s Choice” back in 1997. “It took twenty years to get this project finally up and running” said the organization’s treasurer Kirby Murphy. “The event has become one of the biggest, if not the biggest softball event the state of Rhode Island hasn’t seen in many years.”

In 2018 the first induction was held at the Cranston Country Club. 350 people squeezed into the banquet hall. 27 inductees were included in the inaugural class which included Murphy. “It was evident from the response of the state’s softball community this was going to continue to grow!” he went on to add, “we had to move to a new venue that could handle the larger crowds that we anticipated. The event was moved to the Crowne Plaza in Warwick, as the next induction class of 2019 had 23 inductees and 400 people in attendance.” Then the pandemic hit and stopped all social activities including the 3rd annual induction ceremony.

Determined to pick up where they left off, the committee decided rather than to push back the 3rd induction ceremony a year, they decided to put the class of 2020 and 2021 together in a combination event. The mammoth undertaking was going to require raising more money and the plan was to hold several more events throughout the year, such as the annual Hall of Fame softball tournament, getting corporate sponsors such as OSS sports outfitters and Coastal Printing & Graphics. The Crowne Plaza was selected once again to host the event and November 20, 2021, was the date of the event. Carefully planning the induction dinner with solving the problem of inducting 52 people in a single night and trying to end the evening at a reasonable time while giving all the inductees their time to shine in the moment proved to be a needless worry while each inductee used less than the 3 minutes of their allotted time.

When the evening was finished the newest inductees of the Rhode Island Slow Pitch Softball Hall of Fame were, from the Class of 2020 Coach’s category: Joseph Pingitore of New England Lift Truck out of Warwick; Kevin Clancy of Clark & Sons from East Providence and Mike Finnegan of Dick’s Inn from Warwick.

The Director’s category had a single inductee, Don Laroache of Woonsocket.

Umpires Mary Hughes and Frank Foster went in with this class.

The Sponsors included Richard “Cat” Brindle and Don Francois of Titan Sports from North Kingstown, Al and Sal Conti from the powerhouse Conti Brother’s team that played in the 1960’s & 70’s out of Providence and Ken Kohler who sponsored both men’s team with Kohler Krew and one of the best women’s teams ever to take the field in the 1990’s, Kohler’s Fairwarning.

The Women that were inducted from 2020 included Paula Vitulli, Wilma Briggs who pioneered women’s softball at the beginning but was also a professional baseball player that played in the All-American Baseball league made famous by the movie “A League of their Own”. Lori Palagi and Robin Ramey rounded out the women.

The newest members of the class were from 2021, they were Coaches Ralph Woodmansee and Scott “Stump” Sunderland of the Hope Valley area, Cranston’s Frank Hogan and Dan Perry Sr. and Cumberland’s David Almedia. Walter Henry from Warwick and Robert Casey from Johnston were the inducted Directors.

The Umpires were Cranston’s Rudy Sanda and Providence’s Ron Pazienza.

The Women players that entered the Hall of Fame for 2021 were Lori Ann Difilippo-Cirella, Maureen Ford and Kerri Ann Rizzo.

Plans for the 5th Annual induction dinner are already in the works for next November 19, 2022. It will take place again at the Crowne Plaza. Applications are now being accepted up until March 15, 2022.