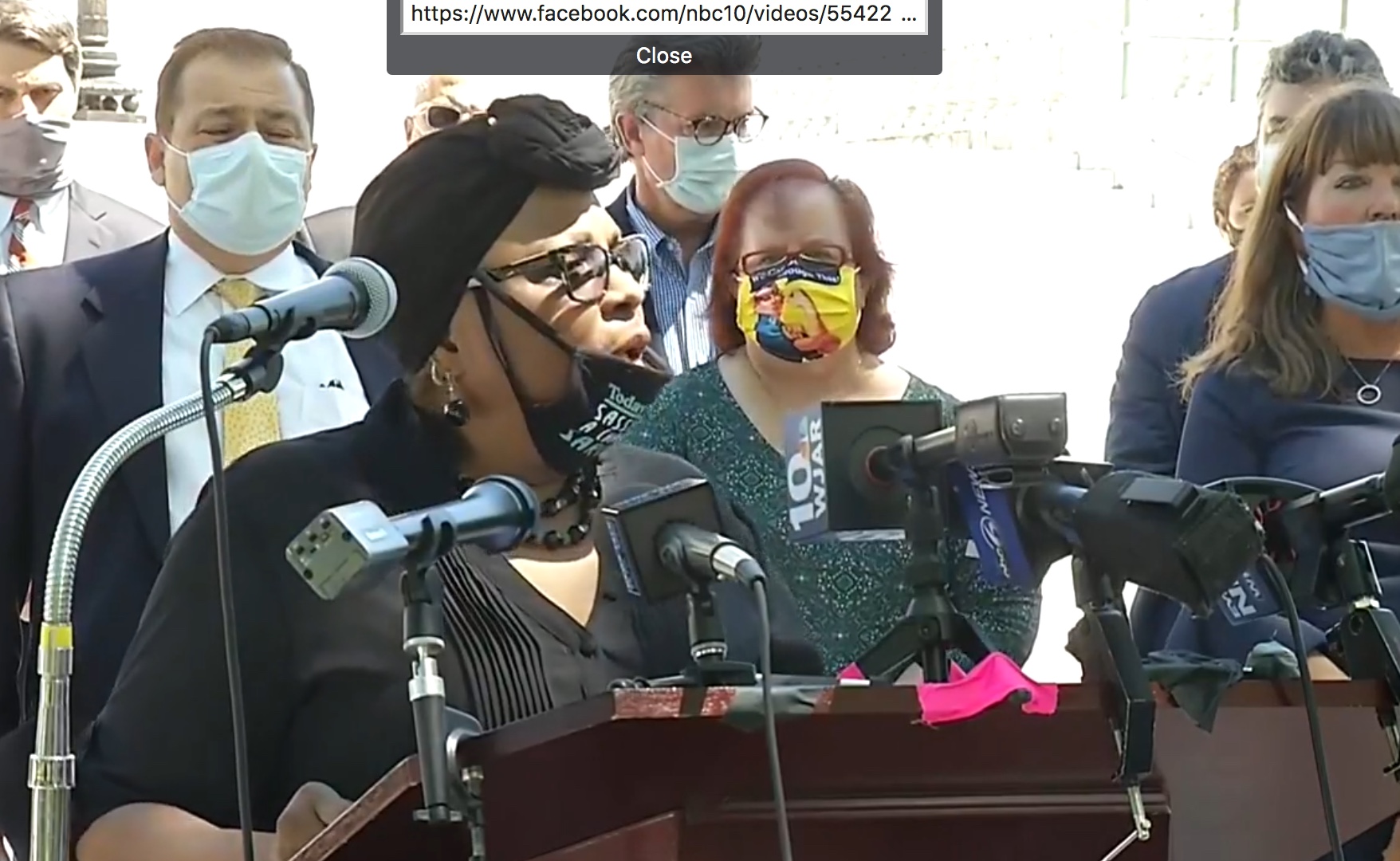 Rep. Anastasia Williams had a press conference yesterday. She was standing with members of the RI legislature as she addressed the public about racial inequities and what can be done about it in Rhode Island.

While portraying the emotional need for change on behalf of the black and minority communities, Williams followed that case for support with a specific detailing of immediate things that could be done, or worked on. Some of these, informally listed here, are:

Revision of the policeman’s bill of rights

Police to wear body cameras on at all times, for the benefit of both.

Establishment of a state reform task force to oversee these.

An end to outsourcing our tax dollars and the bypassing and dismissing of people of color for jobs who are qualified here.

Use of Covid19 federal dollars to address communities of color, to provide resources and equipment to fight the virus, which disproportionately impacts minorities.

Decision makers in RI need to be more diverse and representative of a diverse community.

DCYF should be purged. Treatments and placements of children of color is horrendous; being poor is not being ‘less than’. DCYF workers should also be representative of the poor and minority community

Minority quotas: RI state’s contract wording should be mandatory employment, not “best effort” employment with quotas raised from 10% to 25%, with 15% immediately instituted. Adding Portuguese as a minority made the 10% not applicable to African American population. 10% is an insult.

Drivers licenses for undocumented: This applies to our brothers and sisters who contribute and pay taxes in the state. They had licenses until “the Republican Governor stripped that provision away”.

Boards and Commissions should be changed to provide insight into the diverse state we live in – so we all can work together.

Living wage: The RI community has just experienced, first-hand, how important the front-line workers are in the medical crisis. They should not be working for $12-14 an hour, on average, while others make $50-$100 an hour to sit at home as managers, making decisions about who needs to work, and who will be fired if they don’t.

Youth programs: We need program in, before and after school. Money can be found. Need paid internships and jobs for youth. “I see many youth in these jobs, but none look like me.”

State MPA list: it is a struggle to get on the list. Minority businesses should be on the list and Rhode Island should not go outside of the state to purchase goods.

Civil service exams: These are a barrier for someone of color – either change them or get rid of them.

Easy gun access: we need to look at that.

When asked about the rioting Williams responded that rioting was a distraction, and part of another agenda. “I do not condone violence. It has nothing about the truth and the facts to it. Groups have different agendas, and a violent agenda is not the direction this agenda needs to go in.

Speaker Mattiello addressed the group. “We’re in difficult times – the COVID19 crisis, the criminal act of the murder of George Floyd, peaceful protests, and then the rioting and destruction. The budget is a major issue. We’re here because of the social and racial unrest in the US. Thank you to Rep. Williams for educating. Saddens me in 2020 that racism is still an issue. Time for us to really listen to each other. Budget right now is our first priority. We can work over the summer and the fall to see what can be done on these other issues that are being raised.

One member of the audience, a self-identified protestor said, “It took a riot for you guys to address George Floyd. Why not in the beginning?” Ysanel Toussaint said. “We want our voice heard, but we are not begging for our voice to be heard. We are demanding for it to be heard.”

Williams stepped in to respond to Toussaint, saying, “I am not here defending his stance, but one of the things we as a community, especially the community of color, has to get involved in is the political process. We are so detached’.

Note: There is a demonstration planned today at 4:30pm. Sources have told RINewsToday that one group of young students have pulled out of the event, fearing violence, and will conduct their own event at a later time, and the Black Lives Matter organization has also said this rally is not associated with them. The group, The RI Coalition Against Gun Violence was said to be involved in its organization, as well as “some other adult organizers”.