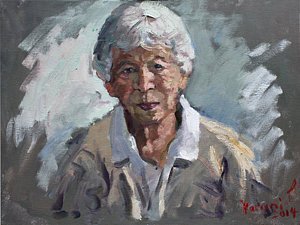 Pushed to her limit…by Michael Morse

Amelia is ninety-four and has been taking her medication the same way for years, and nobody, I mean NOBODY is going to tell her different. We arrived at her home at 10:34 am. After knocking at the front door and not getting an answer, we went around the back. Meanwhile, Amelia was making her way from the back of the house to the front door.

We knocked on the back door, no answer because Amelia had just struggled through her house to the front. I could hear cursing from inside. I had no idea what was going on at this point. I went back to the front door to see if I could pry it open, only now it was already open. I looked in and saw my patient walking back to the rear door. She moved pretty well for an older person.

I walked through the entryway past some stained-glass windows into a perfectly preserved fifties style home. The workmanship was remarkable. Carved oak stairs, antique furniture that looked like it came off the showroom floor, a tile kitchen that would put today’s workmen to shame. When I caught up with Amelia she was breathing fire.

“These pills! I’ve been taking the same ones for forty years! I’m not taking these, they’re not my pills!”

“Try to relax,” I said, taking the prescription bottles from her hand. Our other five rescues were on other calls, surrounding cities and towns were responding into Providence on mutual aid but I couldn’t just leave her hanging, she was really upset.

After some consultation we found that her doctor couldn’t be contacted, the pharmacy had substituted her usual prescription with a generic type of the same medication. The dosage was different, she had to either cut the pills in half or take one every other day.

She wasn’t going for it. No way. The pharmacy went as far as sending a technician to her house to explain the situation. Nothing helped so she called 911 which is where we entered the picture.

I called the doctor’s office and got stuck in the answering system, never connecting with a human. The message that stood out was, “If you are having an emergency, hang up and call 911,” which is exactly what Amelia did. I called the pharmacy and talked to the pharmacist. This had been going on for two days I was told. He promised to page the doctor and have him call Amelia. She refuses to take any medication until she hears from him.

She’s ninety-four with a weak heart. The system is pushing her to her limit. I offered to take her to a hospital to get straightened out; she refused. We did all we could do which I’m afraid isn’t enough.

But it still is better than the nursing home she said and slammed the door.