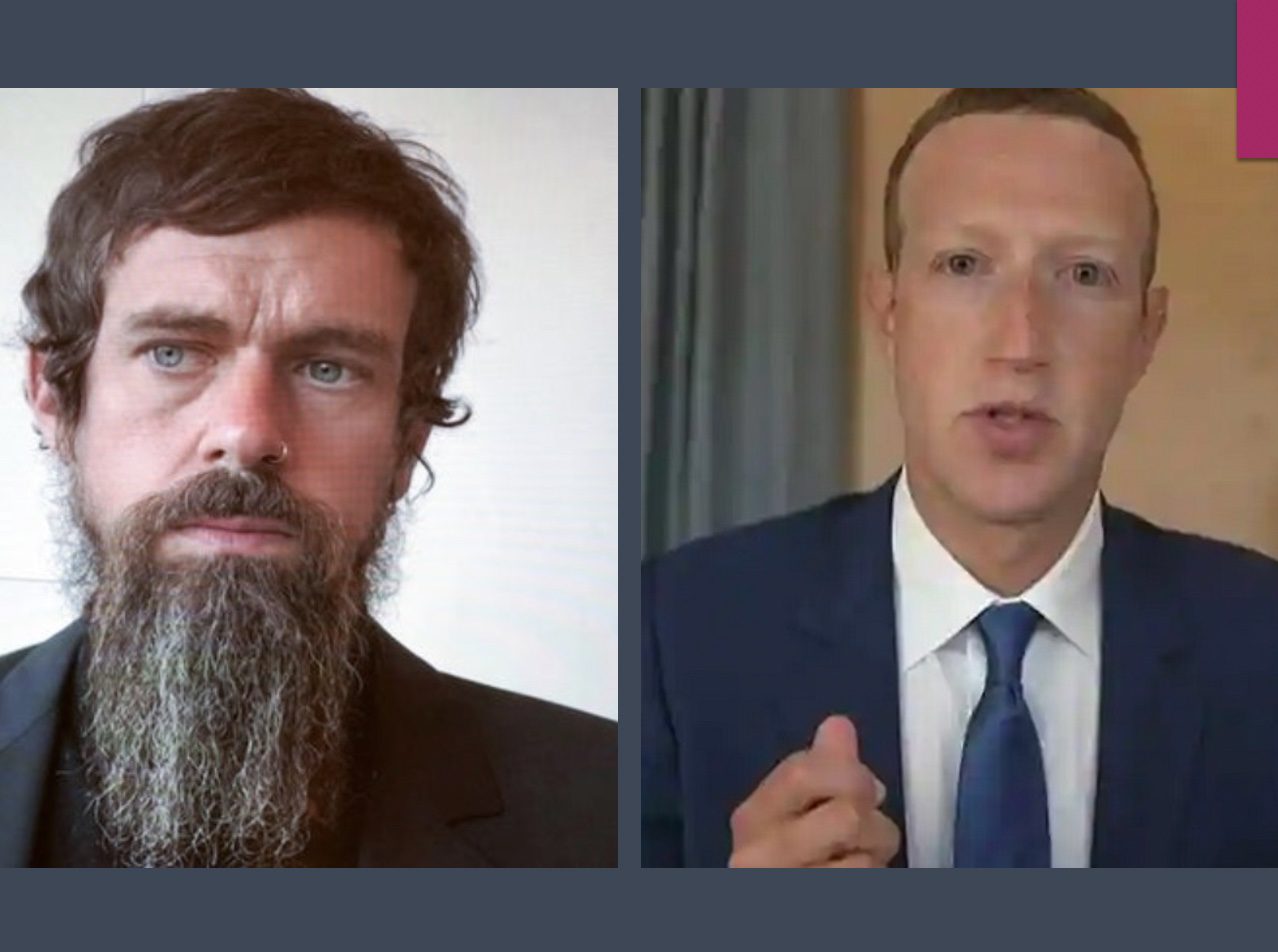 Twitter took down President Trump’s Twitter account permanently, after suspending him a few days before. It did so out of what they stated as fear that further tweets may incite more violence. President Trump has 87 million followers on Twitter and it has been his main venue of communication with the American public.

Theses social media companies are private companies and they set their own rules, and can change them at any time. They are not subject to the first amendment – they can do what they want. Those who want freedom from their rules should seek alternate communication vehicles – but few exist. They hold the power of social media. They have defined it. Before them it wasn’t a thing. Participants need to abide by their rules, or face deleted accounts.

The deleting of accounts is coming in waves, several times a day. Most are conservative accounts, political accounts, or people reposting what is considered dangerous or offensive.

Apple and GooglePlay have taken down the fairly new conservative social media app, Parler. By late afternoon on Saturday, it was still accessible on a computer, but not an iPhone.

The news cycle has been constant about Twitter’s action. And we’ve all begun to realize how dependent we are on them for communication with one another, for promotion of our companies, for the social network of our lives. Never moreso than in pandemic times have we turned to these venues to stay in touch with one another.

Only recently have we heard calls for their regulation. That they have become too big, too all-consuming, so much the fabric of America that they need to be monitored, split up, and regulated.

Many are only now realizing our dependency on these private networks owned by so few people – who also gather and use our data and use it for commercial purposes – etc.

There has been controversy about revoking their coverage under Section 230 of the Communications Decency Act and Mark Zuckerberg and Jack Dorsey (Twitter owner) were called to congress to explain why they should still be covered with this protection. Section 230 is a law passed by Congress in 1996. It says online platforms are not legally responsible for what users post. This legal and policy framework has allowed for YouTube and Vimeo users to upload their own videos, for instance, for Amazon and Yelp to offer countless user reviews, craigslist to host classified ads, and Facebook and Twitter to offer social networking to hundreds of millions of Internet users. Many say this protection enabled the creation of the modern Internet. But critics — on both the left and right — say it gives tech companies too much power.

Michelle Obama said publicly that she had petitioned the social media giants to ban Trump from all their platforms. CNN has asked cable companies to no longer carry FOX News. Republicans are being asked to resign. Trump supporters, having nothing to do with the Capitol building incident, are being pushed back at work and among friends and family.

How big is too big?

Breaking up monopolies that have become so large they have societal and political influence over people, worldwide, has been done with banks and other companies. This would allow for more monitoring and build in competition. So far, this is still being considered and this may or may not be taken up in the new Congress.

While the president’s Twitter account was deleted, others such as terrorists and those who have wished the country harm or made direct threats to individuals are allowed to stay. As we go to press the hashtag #H—Pence is trending (word rhymes with dang). Threats are rampant. All we can do as people is “report Tweet” or “report post”. The rest is up to the gatekeepers. Often done by algorithms.

Madonna’s infamous statements still exist, such as: “I am outraged. Yes, I have thought an awful lot about blowing up the White House. But I know this won’t change anything,”

What are people saying?

Mike Pompeo, US Secretary of State: “Silencing speech is dangerous. It’s un-American. Sadly, this isn’t a new tactic of the Left. They’ve worked to silence opposing voices for years. We cannot let them silence 75M Americans. This isn’t the CCP.”

The ACLU: The American Civil Liberties Union is raising concerns about social media platforms banning users. While the ACLU has repeatedly locked horns with President Trump and his administration over issues such as the president’s travel ban, “the ACLU is worried about the ramifications of tech companies diminishing online speech. We understand the desire to permanently suspend him now, but it should concern everyone when companies like Facebook and Twitter wield the unchecked power to remove people from platforms that have become indispensable for the speech of billions — especially when political realities make those decisions easier,” said Kate Ruane, ACLU senior legislative counsel, in a statement. “President Trump can turn to his press team … to communicate with the public, but others — like the many Black, Brown, and LGBTQ activists who have been censored by social media companies — will not have that luxury.”

Ed Achorn, immediate past editor, Providence Journal: “Friends, consider what our founders said: “Whoever would overthrow the liberty of a nation must begin by subduing the freeness of speech.” ― Benjamin Franklin, Silence Dogood. – “As Lincoln noted, free speech is our wonderful cultural inheritance as free people. A rare and precious thing in a world of government brutality and oppression.” – “Friends, consider what our founders said: “If the freedom of speech is taken away then dumb and silent we may be led, like sheep to the slaughter.” — George Washington, The Newburgh Address”

Michael Yelnosky, past dean of Roger Williams Law School: “My two cents. This is not censorship in the way we normally think about it because Twitter and Facebook are private entities and not the government. Removing posts that incite violence seems reasonable, although lines are blurry. And Trump has lots of other outlets. Lots.”

Madison Cawthorn, a business owner and conservative political consultant: “When you tear out the tongues of those who speak against you, you are not proving them liars. Instead, you are proclaiming, on the altar of oppression, that you are crippled by fear of what they might say.

Nikki Haley, former U.N. Ambassador reacted to the permanent suspension of President Trump’s Twitter account, describing it as “an instance of “silencing” of the kind that happens in China.”

Brit Hume, Senior Political Analyst, is calling out big social media companies for banning President Trump’s accounts based on what he says are “pure editorial judgments.”

Rep. Jim Jordan of Ohio: “What happened on Wednesday at the U.S. Capitol is as wrong as wrong can be. But canceling conservative speech will not promote “unity and healing.” It will only divide us further.”

Russian dissident Alexei Navalny offered a lengthy denunciation of Twitter’s decision to permanently ban President Trump saying that it appeared to be “based on emotions and personal political preferences.” Navalny, a ferocious Kremlin critic, only narrowly survived after he was poisoned in August with the nerve agent Novichok by agents of Russian President Vladimir Putin.

President Trump responds through a statement that he may seek to build his own online platform.

Parler: Apple said that, while the company has “always supported diverse viewpoints,” Parler had not done enough to curb “threats of violence and illegal activity” on its platform. The company added that Parler is suspended “until they resolve these issues.” In an email to Parler, Apple’s App Review Board told the app’s developers that “Parler has not upheld its commitment to moderate and remove harmful or dangerous content encouraging violence and illegal activity.” Amazon pulled the app technology Saturday night.

In Rhode Island Rep. Justin Price, R-Richmond, tweeted Saturday that he “marched to the capitol with 1 million peaceful patriots”. Since that tweet he has been besieged by responses from others, including Democratic representatives with calls for him to resign. Price was careful to say that he did not go into or around the Capitol building.

Editor’s Note: We received word from VIMEO that our (paid) account was deleted because we had infringed on policy by spreading a political rumor that was untrue. In fact we used the video editing tool to edit a Presidential statement some time ago. We’ve appealed and waiting to hear on their decision, but we intend to cancel once we’ve been restored.

Part of the misunderstanding that many people have is that these social media giants do not state what their rules are. Their decisions to delete are subjective and reflect their personal beliefs. American businesses have certain protections to do what they want and say what they want, within clearly defined legal parameters. A private media outlet does not have to print anything they do not want to print – and as the rules stand now, no one can make them. Consumers can decide if they think that represents news, an independent voice, or an outlet with a particular interest or bias.

The incidents in Washington, DC were horrific. Is it time to rethink our social media platforms? Our own posts? Our own speech? Words matter. And they can be more powerful than any weapon.