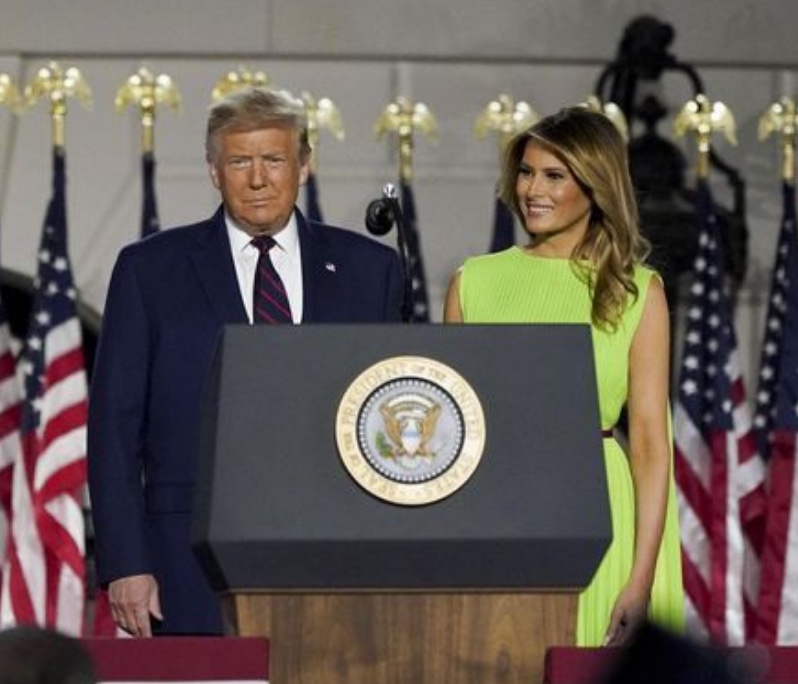 President Trump taken to Walter Reed Hospital “as a precaution” “for several days”. 6pm, Friday. He taped this message to the American people just before he left…

President taken to Walter Reed Hospital – previously given a single 8 gram dose infusion of Regeneron’s polyclonal antibody cocktail. He has been taking zinc, & vitamin D as well as Amotidine, melatonin and a daily aspirin.

Several other people close to the White House and US government have tested positive – late Friday night Kellyann Conway announced she is positive with mild symptoms.

Joe & Jill Biden have tested negative – another test should be done in 72 hours and he should quarantine in the meantime. The campaign announced it will withdraw all negative ads.

US Secretary of State Mike Pompeo has tested negative.

The country/world learned of this by a Tweet from the First Lady and then the President, at approximately 12:57am.

The President’s top aid, Hope Hicks tested positive and is experiencing mild symptoms. She traveled with the President to the recent debate and the most recent rally.

The President & First Lady were tested, with positive results. They are experiencing no symptoms. They will quarantine at least 10 days and will require 2 negative tests to continue without restrictions.

The President’s Chief of Staff was tested. Mark Meadows has announced he tested negative.

The President’s age puts him in higher risk, as well as his weight, but he is in excellent health with no other co-morbidities. His past physician said how healthy he is and he may do very well, even showing no symptoms.

The President is tested at least once a day, so this is early on, and his viral load may be small.

Text of a statement from Sean Conley, physician to the president:

“I release the following information with the permission of President Donald J. Trump and First Lady Melania Trump.

This evening I received confirmation that both President Trump and First Lady Melania Trump have tested positive for the SARS-CoV-2 virus.

The President and First Lady are both well at this time, and they plan to remain at home within the White House during their convalescence.

The White House medical team and I will maintain a vigilant watch, and I appreciate the support provided by some of our our country’s greatest medical professionals and institutions. Rest assured I expect the President to continue carrying out his duties without disruption while recovering, and I will keep you updated on any future developments.”

COVID-19 has a much better prognosis than it did even months ago, and most people recover well. Death rates have plummeted. New developments about the use of some early treatments – if determined – are monoclonal antibodies, with their use in Europe becoming more common. Early treatment with remdesivir or hydroxychloroquine/zinc combination may also be indicated – but – the most common treatment is nothing unless symptoms occur.

Of course with the President and his schedule, tracing will be extensive and far reaching, and is underway.

About a week ago the CDC published their survivability rates by age.

It is 32 days to the Presidential election. Campaign events have been canceled. At the very earliest he would emerge, if fully recovered from any symptoms and with two negative tests, in 10 days or longer.

The President will take a business conference call this morning from the residence, where he will stay during this time.

Will the debate be held between VP Mike Pence and candidate Kamala Harris, set for early next week.

3 Members of the G7 have been afflicted with coronavirus and recovered.

Britain’s PM Boris Johnson is the most famous of the world leaders to have recovered from coronavirus. He was quite ill and taken to hospital for treatment and has now fully recovered.

Brazilian president Jair Bolsonaro – described it as “a little flu”.

Monaco’s head of state, Prince Albert II had contracted the virus in mid-March, and was fully recovered by the first of April.

The Honduras president, Juan Orlando Hernandez, who announced his treatment with a zinc/medication combination, had a short hospital stay, and recovered.

The Guatemalan president, Alejandro Giammattei, tested positive in September, is having mild symptoms such as cough, and is recovering.

Bolivian interim president, Jeanine Anez – she is recovering, having had mild symptoms.