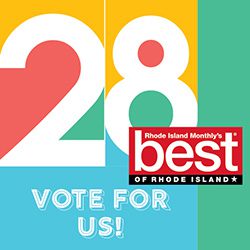 The Best of Rhode Island is a long sought-after designation from restaurants, businesses, nonprofits, and media outlets. It’s a fun – but coveted award. Make no mistake about it, it is more about advertising and branding promotion for Rhode Island Monthly, than it is about a judged honor. But we all know the game, and we play it with delight.

We encourage the Reader’s Poll submissions – Vote for me! Vote for me! – as we tell everyone how to go onto the website ballot and cast their vote. Categories are sub-divided by “statewide” and regional areas such as “South County”, “West Bay”, etc. Categories from hair salons, donut shops, bookstores, restaurants, and newscasters.

Retail outlets have attached iPads at their checkouts so people can register their vote as they leave. Flyers are made. Social media posts are posted.  For the month of April, RI Monthly’s Best of Rhode Island is the talk-of-the-town.

Winners have participated in a lavish evening where “selfie” takes on a new meaning as plaques are given out and award winners named in an event at PPAC, amidst creative food and drink. The first pandemic awards night was done virtually.

What are the rules? “The ballot will be open April 1st through April 30th. You may write in your choice of business for each category. There is only one vote per valid email address. Please note that we are only allowing 3 votes per IP addresses to ensure there is no ballot stuffing. Businesses should encourage patrons at their establishments to vote on their own devices using their own data plan. Voters will be able to return to the ballot throughout the month to change or complete their votes.”

In addition to Statewide, there are geographies:

In 2020, John DePetro, host of The John DePetro Radio Show, which runs from 11am to 2pm, won in the Radio Talk Show Host category. DePetro’s Show airs on AM1380/99.9 FM WNRI Radio, with Facebook Live tie-ins. It was a bit of a surprise to hear DePetro won in that category, for two reasons – the first is that he is an acknowledged “Independent Man” on radio, without a large media outlet behind him, and depending on creative use of social media, sometimes including live event coverage in late night hours.

When the entire category was changed, we asked RI Monthly why they would do this, especially with a new winner onboard. Notably, the most popular radio talk show hosts reside on WPRO-AM Radio with Tara Granahan starting at 9am, and continuing into the afternoon with Matt Allen at noon and Dan Yorke at 3pm. There are also a variety of weekend talk shows and shows on stations outside of the WPRO category.

Changing the category would leave only the popular Granahan with a full morning radio show (9-noon) as a major candidate – DePetro is on 11am to 2pm. The noon hour is also on Facebook live.

Why change the category to MORNING Radio Talk Show Host?

We asked RI Monthly – and John Palumbo, publisher, replied: “Our editors meet annually to review categories and based on trends, and previous years’ response make additions and subtractions to the poll every year. For instance, they added locally made jewelry and locally bottled drinks this based on observing, what I am told, is a growing trend in both areas.” Sarah Francis, continued, “the category you’re referring to wasn’t deleted. We redefined it as we frequently do, just as other media categories in the readers’ poll come and go. For example, for a while, there was a category for traffic reporters, but then it was retired. More recently, we added categories for blogs, pod casts and even Instagram and YouTube stars with a Rhode Island connection.”

A media critic who preferred not to be named suggested some cancel culture might be at play, given that DePetro was definitely to the right side of controversial issues in Rhode Island.

Holland Cooke, media/radio consultant added this to the discussion: “there’s not enough local radio programming for the competition to be meaningful – zzzzz“.

No response to a request for comment to Tara Granahan, though she promotes the category at the end of her morning show. RI Monthly has a regular spot on her show, when Sarah Francis, editor, reviews each month’s new magazine issue. Francis was a regular interviewer on the Buddy Cianci Show as well.

What does John DePetro have to say?

“I find it odd RI Monthly would attempt to limit the category after all these years. In the past, both Buddy Cianci and Arlene Violet were both voted best talk show host. Would they no longer qualify? The most popular talk program ever in the history of the format was Rush and he was on noon to 3. The current most popular talk program is Sean Hannity who is heard 3-6. What is the point of encouraging people to vote if you try to limit a category?”

“I will take myself out of the equation for a moment: RI Monthly does a monthly segment with Tara. I would think they want to avoid the appearance of impropriety from York or Allen. I would hope they rethink this and alter it back. Why are Matt Allen and Dan Yorke excluded from “best of”?”

“If RI Monthly wants to name editor’s pick, that is their prerogative. However, if you ask the public to vote, it is against the law to try and rig a contest.”

RI Monthly has not responded to further clarification requests.

In the meantime, John DePetro has expanded his voting requests – listeners are now asked to vote for The John DePetro Show in 3 categories:

P.S. – RINewsToday.com is running in the Local News Blog category (even though we’re not a blog and the digital news sites have requested a category change – but – we’d love your vote!  Here: https://www.rimonthly.com/vote/#/gallery?group=379826