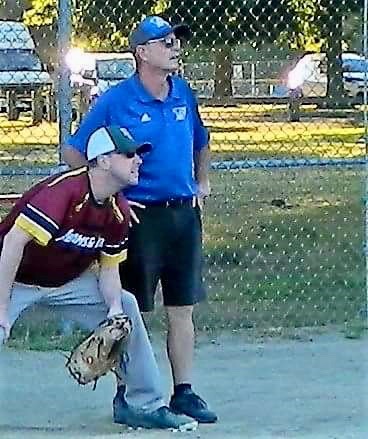 The Rhode Island Softball leagues are starting up with new rules and restrictions in place to protect the players, officials and spectators that is changing the old game as we know—for now.

Usually by the middle of July marks the halfway point for the state’s softball season. During normal times in years past, the men’s, women’s and youth softball season would be in the middle of their respective State Championship tournaments. But this year, the 2020 season is more like the game, Jumanji! – everything is inside out and upside down.

Freedom softball director Bob Berard said, “we didn’t think that we would even get to play this season. But as the different phases went by, we started to prepare for a season that may not happen, but we were all holding out hope, and holding our breath.” Slowly it became clear that the state was being cautious with each phase not to ignite the virus again where they would have to shut everything down and start the process of reopening again. Berard went on to say, ‘if the shutdown lasted even a week longer, it was very doubtful that we would even have attempted a season. But we lucked out and were given a green light to start, but we had to come up with a plan to instill protocols for the safety of the players, officials and spectators.”

Every sports organization was given the same directive, in order to play you have to follow the rules the state had put in place to the letter. If you cannot comply, the rules said, you and your organization will be shut down. So, summer sports were alive again. Different, but alive. If you come to a game as a spectator in Warwick, you are required to social distance yourself at least 6 feet apart from the other spectators. The teams when in the dugout must try and do the same. “Teams purchased their own game balls, and each team rotates their own balls into the game, minimizing the number of different players  handling them; masks are not required in the confines of the playing area and the traditional after game handshake will not be allowed.” Berard said. “The umpires no longer are in control of the game balls; they do not touch the ball or the bats. Minimalization or common touch we hope will keep the risk low.” Acknowledging that playing a game with a common piece of equipment that is handled on every play by multiple people can only help so much. “We encourage a rotation on sterilization of the balls and bats when not in play or use.”

For the players on the teams, they are simply happy to get out and play softball and the prospect of having no season in 2020 was sad and depressing. “When we received the word that we were going to be allowed to play, we were like kids busting out of school on the last day of the year,” said longtime coach of the Twin Oaks team, Mike Regine. He went on to add, “for the players on the teams, softball is a big part of our social setting; being part of a team, playing against guys that started out as opponents but along the way became friends and friendly rivals, we needed this season to start, with all that has happened this year. We all needed this!”

Some of the early season issues are currently being dealt with. “Teams cannot hang around the fields any longer after the game,” Berard said. “Tournaments are off the table for now, but we are trying to figure out how we can make it work and instead of having a summer season and a fall season, this year we are just going to have a single season. As for the players’ reaction, they are simply happy that they are having a season at all, and are adjusting to the new rules that have been put into place”. For the most part the season has had smooth sailing thanks to a big part of the softball community coming together and rowing in the same direction and proving that where there is a will, there’s a way!