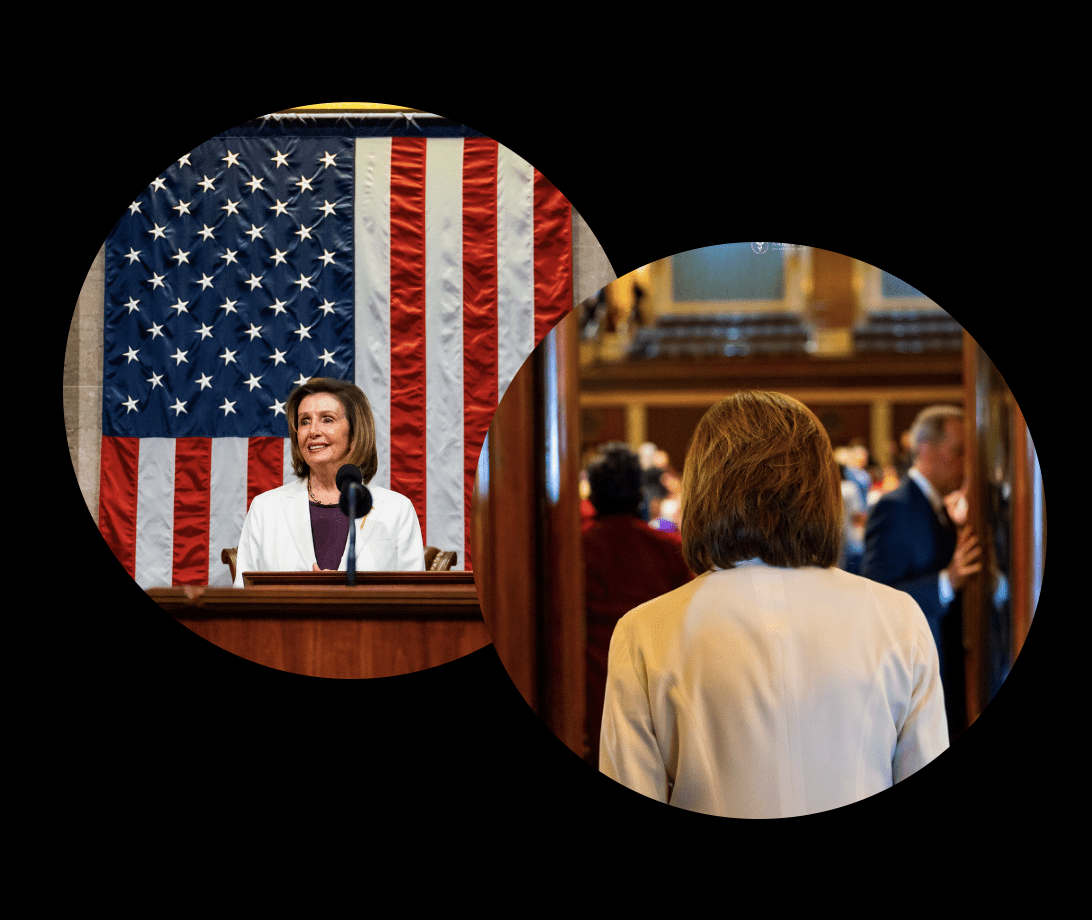 With the dust settling after the mid-term elections and GOP taking control of the lower-chamber, House Speaker Nancy Pelosi (D-CA), followed by the No. 2 Democratic, House Majority Leader Steny Hoyer (D-Maryland), will give up their leadership positions although both will keep their Congressional seats next year.

“While [House Majority Whip Jim] Clyburn [D-SC] has ceded his No. 3 position, he’s now seeking to remain in leadership next year in the No. 4 assistant leader slot,” reports Mike Lillis and Mychael Schnell, in a Nov. 19 article, “Democrats’ Leadership Shakeup in Decades Takes Shape with No Drama – Almost,” on the website, The Hill. In a letter to his Caucus members, Clyburn makes his case to stay in leadership by saying he would be a benefit to the new leadership team coming in next Congress.

Pelosi was first elected to Congress in 1987. Since 2003, Hoyer and Clyburn have led the House Democratic Caucus.

Last Thursday, Nov. 17, Pelosi, 82, announced on the House floor that she would not seek a Democratic leadership role in the 108th Congress.  This came after the House lost its Democratic majority to the Republicans, albeit by a small margin.

“And with great confidence in our Caucus, I will not seek re-election to Democratic leadership in the next Congress,” she said. “For me, the hour has come for a new generation to lead the Democratic caucus that I so deeply respect. And I am grateful that so many are ready and willing to shoulder this awesome responsibility,” said Pelosi, the first and only woman who served as House Speaker and led the Democratic House Caucus for over two decades.

With a slim Republican majority in the House, President Joe Biden had encouraged Pelosi to stay as House Speaker for the last two-years of his term. After her announcement, the President recognized her legislative accomplishments and serving her San Francisco constituents for over 35 years. “With her leading the way, you never worry about whether a bill will pass. If she says she has the votes, she has the votes,” he said.

“Speaker Pelosi, as President Biden said, will be remembered as the most consequential Speaker in our nation’s history. A key part of that role is empowering the next generation, and ensuring that the Democratic Caucus has strong leadership moving forward. I am thrilled that the Speaker will continue to serve in the 118th Congress, representing her home of San Francisco, and enabling the Caucus to continue to learn from her and benefit from her wisdom and experience,” says Congressman David Cicilline, representing RI Congressional District 1.

In a statement released after Pelosi took to the House floor to step down from House Democratic leadership, Cicilline stated:

“Today is a bittersweet day for our country as we mark the end of Speaker Nancy Pelosi’s tenure as the leader of the House Democratic Caucus. I have been lucky enough to serve with and learn from one of the greatest political minds in our country for the past twelve years and am honored to call her a mentor, and most importantly, a close friend.  I remain in constant awe of her brilliance, toughness, and dedication to service. Nancy Pelosi led our party to the majority twice and saw our country through some of the toughest times in our nation’s history including the COVID pandemic and the attack on our democracy on January 6, 2021.”

“The House Speaker’s historic career will not just be remembered for the barriers she broke but also for the incredible progress she delivered for the American people and her beloved San Francisco, said Rhode Island’s Senior Congressman.

According to Pelosi’s House leadership, the Democrats were able to reform the nation’s delivery of health care, deliver accessible and affordable care to millions of Americans, make the largest investment in infrastructure improvements and climate change mitigation in the country’s  history, also ensuring that every single American got the relief they needed and deserved as they faced a once in a lifetime global pandemic.  Pelosi also “protected the nation’s democracy against those who sought to overturn the election result and destroy the very fabric of our nation,” he said.

“Speaker Pelosi has always supported my work since I first came to Congress in 2011 and has been a steadfast ally on gun safety legislation and LGBTQ+ equality. I am also grateful for the trust she placed in me to serve as an impeachment manager following the attack on the Capitol on January 6, 2021, says Cicilline.

“In addition to our work in Washington, I’ve had the pleasure of welcoming her to Rhode Island many times, where her grandparents first met, and am thankful for her focus on delivering for every American and all Rhode Islanders,” noted the Rhode Island Congressman.

Cicilline added: “Having come from big, loving Italian families, we both learned from a young age the importance of putting family first and looking after our neighbors. We share a commitment and belief that every hardworking American deserves the ability to provide a safe, warm home for their children and the opportunity to get ahead. She has helped to deliver monumental legislation to empower Americans, including the Lily Ledbetter Fair Pay Act, providing paid parental leave for federal workers, expanding educational opportunities and student aid, and increasing the minimum wage.”

“An outspoken proponent of equality, she has been a champion of the Equality Act and the Respect for Marriage Act and led the repeal of the homophobic ‘Don’t Ask, Don’t Tell’ policy to finally allow every member of our nation’s military to serve fully as themselves,” said Cicilline, noting that her “trailblazing 35-year tenure in Congress, 19 of those as Democratic Caucus leader, have been defined by her unwavering commitment to service, the American people, and belief that each of us deserves the chance to live our own American Dream.”

Adds says Congressman-elect Seth Magaziner. “House Speaker Nancy Pelosi has served this democracy here and around the globe, while never losing sight of what matters most: rebuilding the American Dream for working people across the country.”

“I thank Speaker Pelosi for her tremendous leadership and am excited for the next generation of leaders that will tackle the biggest questions of our time— rebuilding our middle class and creating a fairer economy, fighting climate change, and turning the page on Trump-extremism once and for all,” added Magaziner.

“Nancy Pelosi not only has been master of legislative procedure, a unifier of her caucus, a skilled tactician – and someone who broke the ‘marble ceiling’ for women in the halls of Congress. She shepherded several crucial pieces of legislation through Congress to improve the health and well-being of older Americans, including the Affordable Care Act and the Inflation Reduction Act,”  says Max Richtman, President and CEO of the National Committee to Preserve Social Security and Medicare (NCPSSM).

“She will be missed as a leader and a champion for our most vulnerable citizens,” says Richtman, noting that NCPSSM looks forward to a continued working relationship on issues vital to America’s seniors with whomever emerges as the next Democratic leadership team in the House.

During Pelosi’s announcement the Republican side of the chamber was nearly empty except for a few members, including House Republican Whip Steve Scalise (R-Louisiana). Scheduled meetings kept House Minority leader Kevin McCarthy from attending Pelosi’s noontime announcement that she was stepping down as the House Democratic leader. Later he would tell reporters, “I had meetings but normally the others would do it during votes — she could’ve done that, I would’ve been there,”  he said.

While Senate Minority Leader Mitch McConnell (R-Kentucky) noted that he had frequently disagreed “forcefully” over the years he congratulated the Democratic House Speaker on “concluding her historic tenure” and her “consequential and path-breaking career.”

Is Passing the Political Touch a Good Thing?

“The new leadership team is great, but it should not be exclusively composed of young lawmakers,” says Robert Weiner, former Chief of Staff to Congressman Claude Pepper’s House Select Committee on Aging, former White House staffer, who has written over 1,000 Op Eds published in major media outlets throughout the nation.

Many characterize Pelosi, Hoyer, and Cyburn stepping down as the “passing of the political torch,” in the House, from one generation to the next, even though the new up and comers are in their 40s and 50s. Weiner questions, “Is this a good thing to celebrate.”

“I am very concerned about the lack of aging leadership with all the wisdom and guidance leaving the podium. “I have written about age discrimination including it occurrence in politics,” says Weiner, calling for voters to decide when it is time to go.

Will the new leadership team take guidance from the outgoing House Democratic Leadership Team?  “We will see how the new team seeks and takes the advice of recent leadership that had such success or puts them on the shelf,” says Weiner.