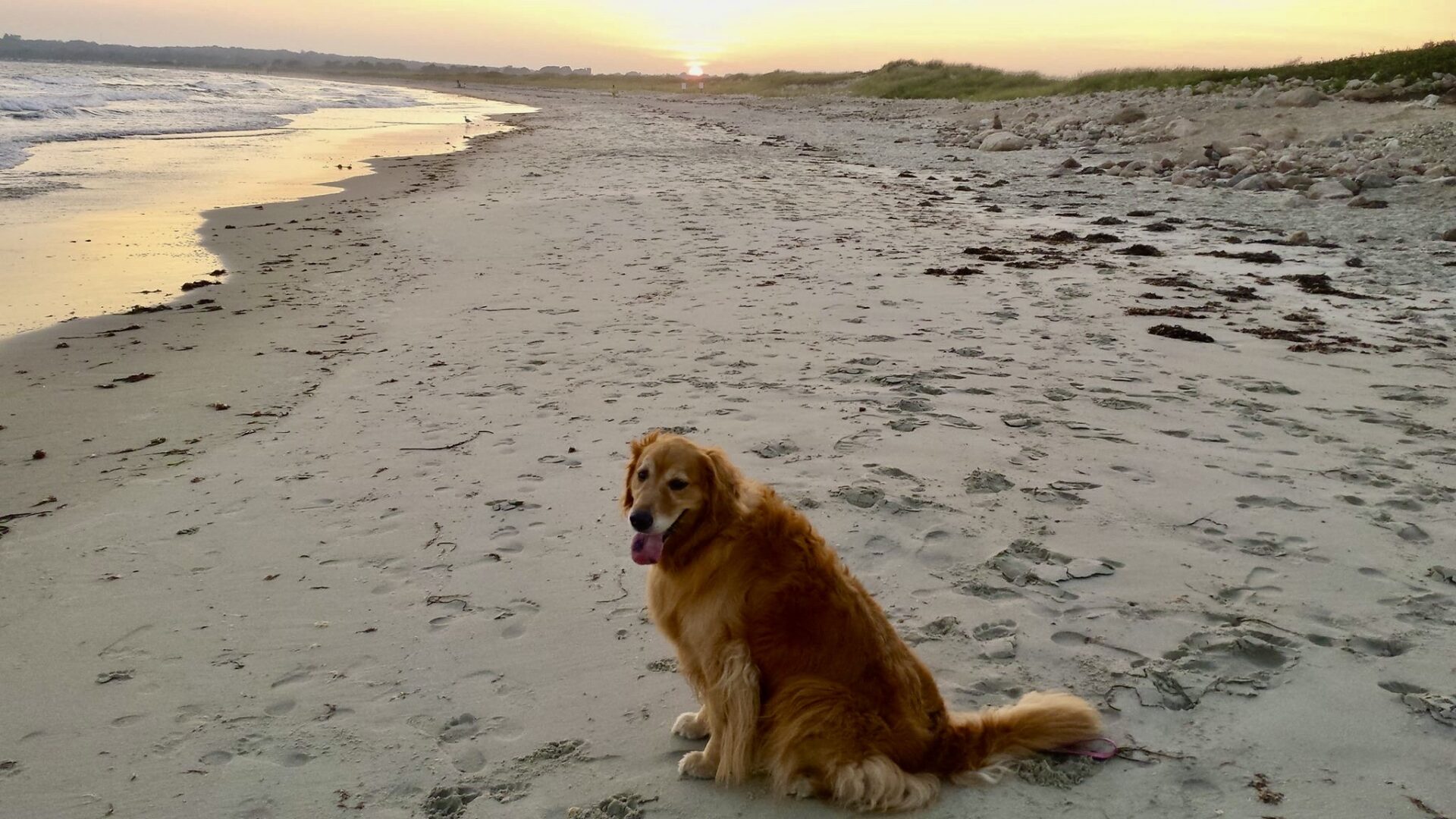 Sunday night December 11 Rhode Island received 3″ of Christmas snow.  One week prior I lost my hunting companion, best friend, and the best damn co-pilot ever. Taking advantage of the new fallen snow, I decided to go afield and clear my head of the sadness that has a grip on me.  Maybe even see some pheasant prints in said snow.  As usual, just like when I normally would be out Pheasant hunting with Jada, I had Arcadia Management to myself. 2 hours of trudging showed no Pheasant tracks and only worsened the pain of Jada’s absence.

At home it is quiet – too quiet.  In Arcadia today it was deafeningly quiet.  No sounds at all.  No tweety birds, no animals,  no other sounds of life. As the sun started to set, I headed for my truck.  At the Midway crossroads a trail to the southwest was chosen rather than the gravel road.  Down the trail I realized it was the very trail Jada and I attempted to find a rooster a second time. A rooster that Jada flushed, and I missed.  This hunt was just 3 weeks earlier.  The memory caused a lot of pain. Since I was alone in the woods, or so I thought, I said “screw it”.  I let out a Rebel Yell to relieve some of the anguish.  Not the Billy Idol type Rebel Yell, but the sound that has been likened to that of a scream of a Mountain Lion.  Little did I know there were 3 does standing 50 feet away, ears up, looking at me like “What is his problem?”  We stood staring at each other for a moment. They must have sensed I was no threat.  Did they sense the anguish?  I continued down the trail to the truck. The deer stayed just inside the tree line off the trail, following alongside, watching me.  Usually a predatory scream like that and they head for the hills.  Oddly enough, not today.  Did they sense the loss of my dear friend?

Jada was the best of the best.  She was the Alpha of the “Hoot” littler out of Goffstown, NH. Call sign “Trouble” Jada could fly back seat with anybody out of USN Air Station Miramar.  Always wanting to be with me she was constantly searching the skies for birds and other aircraft.  Her fascination with aircraft flying in and out of TF Green Airport was remarkable. If for some reason Jada needed to stay home, often I would come home to ripped up paper towels or kleenex at the front door.

Jada’s intelligence grew over time to the point where she would talk with her eyes. It was not uncommon for her to sit next to the couch and look at the items blocking her from getting on the couch and then look at me as if to say “ok, these need to be moved”. Anytime I was underneath my truck, Jada would come under to supervise.  At times she would try to hand me tools but I was afraid she would break a tooth.  I probably shouldn’t have worried about Jada breaking a tooth as most dogs play with sticks -Jada would play with fireplace logs.

Jada showed no sign of her pain.  She was a trooper until the very end.  Ananplasmosis and Lyme disease only briefly slowed her down.  Little did anyone know she had a large cancerous mass in her abdomen and was bleeding internally. December 5th my hand was forced in a painful manner. A pet owner’s worse nightmare.

She was indeed in pain but hid it extremely well.  World Cup players should take note of playing thru adversity.  Jada just wanted to ride shotgun and be afield, no matter what. It is that companionship that I sadly miss. With Christmas coming the holiday now seems insignificant. (writer’s note this article has been rather painful to write and hence it is now, in fact, Christmas.  The house is not the same – way too quiet. My family noticed that fact the moment they stepped in the door. It was the first time ever Jada was not at the door to greet them. Even more noticeable was the fact that there was no shredding or tossing the wrapping paper around by a little Golden Elf.  Jada liked to tear up wrapping paper, however never touched food nor counter surfed in my home.

The only article she ever stole was a wrapped grinder on my center console that I left there for a moment while I ran in the store.  To this very day I cannot figure out how she delicately unwrapped one end and removed the entire grinder so neatly. To test Jada about 3 months ago I left a grilled steak and a baked sweet potato on a plate on my coffee table that was exactly 3 inches below her nose where she was standing. Watching her look at it and then walk away made this Dad proud.

In another life my strongest suspicions became reality on New Years 2016.  Jada was right there keeping me entertained and focused.  Our first new home she was not impressed with.  Our second new home was a far better choice, and her demeanor was always positive. She never lost the inner puppy and would act like a nut thru the next 5 years.  When the stereo was cranked she would fly in from the other room and always got excited and wanted to dance with a big smile.  I never did ask her what music she liked.

Jada was a people dog. Working the abs was always comical. Jada would get right up, come over, and lay across my chest, looking at me with a silly little smirk.  She was always fascinated by people, watching them intently when she could not go up and say hello. She was disinterested in other dogs as a result from her hunting training. Jada’s premier year was 2021, when she put up 27 pheasants and 2 chukar. Towards the end of the 2021 season she would go for 4 hours straight not needing a break. She did take breaks as she was told “sit, I need to catch my breath”. When COVID hit it was Jada’s idea to drive to Maine and say the hell with the idiotic lockdowns in Rhode Island.  Jada was always in Maine and usually in the water to boot, as she was a fish dog. But just as important was for her to see her friend, John the “Cookie Man”, in Belgrade.

A dear friend, Kyle McCarthy, said it best upon seeing the story headliner photo back when it was posted in spring, 2020 “Jada’s picture need no words – it is a scene of tranquility and humanity in this out of control world.”  Jada was always at home in the water searching out fish. Though not much of a swimmer, as soon as her feet would not touch bottom, back she would come to shore.  Jada was the topic of Rhode Island State House hearings back in 2018 when the anti-hunting dog bill was being heard. I told the RI Senate Judiciary Committee, “you tell my Golden Retriever, Jada, she can’t go in the water when the outside temperature is 10 degrees.”  “Good Luck with that as she is a Fish Dog!” The committee looked at me, stunned, as my face said I wasn’t joking.  Jada would get hot in late December and jump in the Wood River to cool off and have icicles start to form on her hair.

In the end I lost my best friend, and just as likely the world lost a dog trying to be human.