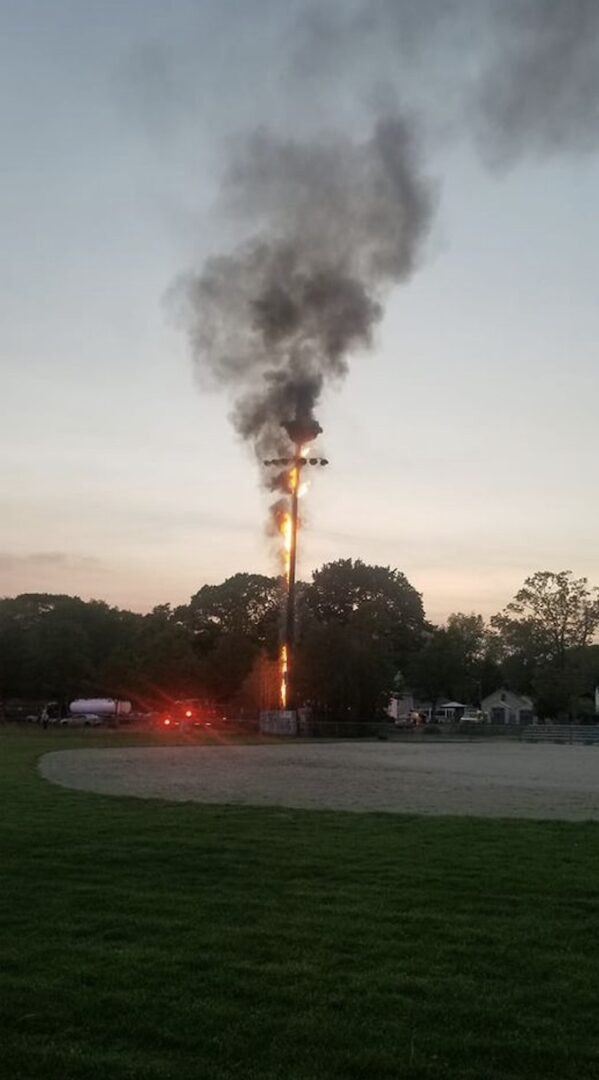 Out-of-the-park! One night at Clegg Field in Warwick

No, it wasn’t the result of a fast ball, or anything to do with softball. This is the approximately 85 foot cell tower at the Clegg Field in Warwick, when, a few nights ago, during an adult softball league game the tower burst into flames and burned itself out. The tower is for cell phone reception for that area of Warwick which has had a continuing problem with reception for some time.

The structure, according to Mayor Picozzi, was a hollow pole with strong wires and cables inside of it. The fire seemed to start from the top and burn downward, but it’s possible the wires inside were on fire with the smoke first appearing at the top. The tower did not fall, and on Friday the tower was removed.

The cell tower company which leases the land from the city had been wanting to build a taller/stronger tower for the area and they will now go through the city’s process to either replace the existing tower or relocate a new tower to another area, according to Mayor Picozzi. Picozzi was unsure what company owns the tower, believed to be either Sprint or AT&T. A tower map labels it as the property of T-Mobile USA Tower LLC

Some of the players at the field have talked about buzzing coming from the tower for the last few seasons, and it had gotten louder in the last several weeks. There were reports that it got even louder just before the fire. Some said complaints had been made about the buzzing, but it is not clear the result of those complaints – if an electrician or the cell tower company came out to see what was happening – it appears not. There have also been reports that the lights on Clegg Field were coming on and off at different times – during the day, or late at night – or staying on all night. Again, the light problem happened over a few seasons, and had been reported to “the city”.

Mayor Picozzi told RINewsToday that cell service in the area is difficult, and that he has to often sit on his outdoor stairs to get good reception on a cell call at his home.

A review of cell tower fires shows quite a few that resulted in the towers’ falling and other damage being caused. Towers have also been “victims” of 5G demonstrations and vandalism.

For now Clegg Field can’t be used at night and it is unclear how long the lights will not be working, or if the destruction of the tower is causing even worse reception in the area.