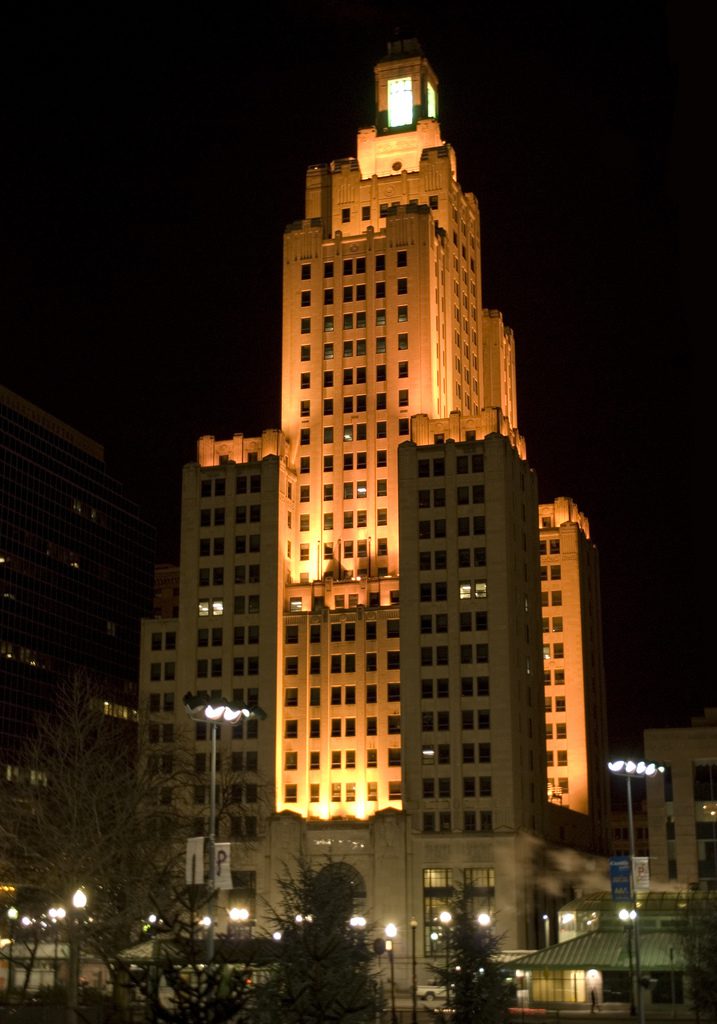 New life for Industrial Trust? Reason to smile, hope. All with a raised eyebrow – David Brussat

On Tuesday, officials gathered in the State House to announce a plan to renovate the Industrial Trust Bank Building (ITBB), Rhode Island’s tallest tower, known also as the Superman Building. It has been vacant since 2013, and sits on the most-endangered lists of both the Providence Preservation Society and the National Trust for Historic Preservation.

All but a few local socialists and mossback Republicans, who know little of how cities work on behalf of citizens, have heaved a sigh of relief. Still, while the $220 million deal agreed to by the city, the state and owner David Sweetser seems firmer than the many proposals offered since 2013, the city/state portion would be a sounder way to spend public funds than most likely alternative uses, and, anyway, it is not yet a “done deal.”

Sweetser still merits raised eyebrows. This deal could have been achieved any time over the past nine years. He should have been run out of town on a rail for darkening the building by dousing its glorious amber façade lighting. That caused downtown’s black hole even more than its absent tenants, mostly Bank of America workers who probably did far less to enliven the area – work and then drive home at 5 sharp – than will the lucky residents of the proposed 285 units. Without that exterior lighting, downtown took on a haunted look, and the ITBB’s vacancy was advertised to the whole world.

But let’s be magnanimous, forgive David Sweetser, and move forward.

A chunk of the funding will come from federal and state historic preservation tax credits, so on top of a long list of requirements should be the preservation – or the return – of that historic sepia glow. White lights will doubtless be proposed to give the building a more “modern” twist, or to satisfy the inevitable craving for a deadly touch of “creativity.” That should be nixed up front.

To fit 285 “units” into this building may seem a stretch. Its floorplates famously contract the farther up its 26 stories you go. Maybe many or most of these will be mini-lofts, like those in the Arcade next door. Or maybe the units’ footages can be more substantial. So far as I know, that decision remains to be made, or at least to be announced. Likewise whether all units will be for rent or for sale.

It is not impossible that as part of the renovation of the ITBB bank lobby, a history museum dedicated to the original plans and the still-extant infrastructure of its loading dock for airships. Those plans never came to fruition, but recall that in 1925, when the building’s construction began, Lindbergh had yet to fly cross the Atlantic, and airships were still considered the future’s likely haulers of overseas freight and passengers. Airship accidents put the kibosh on plans to use the ITBB as a loading dock, and in the 1990s, an earlier owner redecorated the upper floors to eliminate past references to airships. But there remains a model airship gondola outside the topmost east-facing shoulder of the building.

Perhaps, among the renovations, the gondola could be used as the site of the museum, or as a swank speakeasy for tenants and guests, maybe including a latter-day Asta.

It may be impossible in this day and age to develop so many apartments in a single project without including affordable units. Twenty percent, or 57 units, will be affordable, but not so affordable as to be of valid concern to the occupants of market-rate units. So be it. If the apartments are attractively designed, and if the building does spark a revival of downtown, as it should, all of these units will be premium pieds-á-terre for devotees of the metropolitan lifestyle, a throwback to the residential hotels of the ’30s and ’40s made famous by Dashiell Hammett’s “Thin Man” films with William Powell, Myrna Loy and Asta (their dog).

Downtown has not yet sterilized all of its building stock, and has enough fine architecture to explode in popularity compared with other cities. The city will hoover up more than enough in taxes to finance genuinely affordable housing. That’s the whole idea. Cities grow by offering lower-, working-, and middle-class families the opportunity to move further and further upscale as their prosperity increases. Cities that muddle the ladder of opportunity tend to make upward mobility more difficult. These are not popular ideas today, but they have the virtue of reflecting reality.

After wasting nine years of vacancy, the parties who have agreed on a way forward should do so, in part by putting those parties on the hot-seat of transparency as the plans for the Superman Building firm up over the next few months. For now, citizens of Providence and all Rhode Island have reason to smile, and to hope.