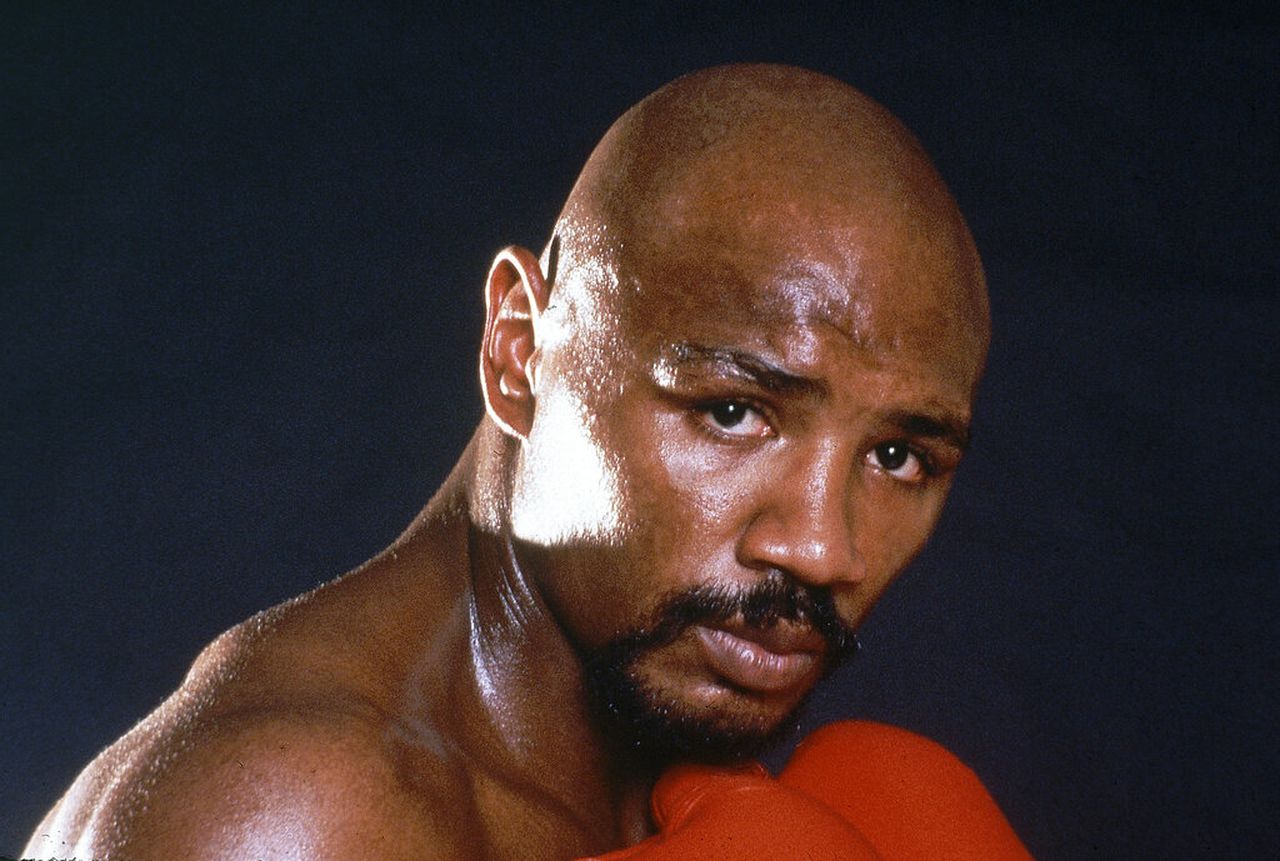 Marvelous Marvin Hagler’s boxing career began in 1969, when after his family moved from Newark, New Jersey to Brockton, MA. Marvin was beat up on the street of Brockton by a local boxer as his friends watched. He decided that enough was enough and the next day he walked into a gym owned by Pat and Goody Petronelli. As fate would have it, the boxer who roughed him up and lit the fire would soon be defeated in the ring by Hagler.

Showing so much promise in the ring the Petronelli brothers became Hagler’s trainers and managers and entered Hagler into some amateur tournaments, but in order to qualify Hagler had to be 16 years old, and being only 14 years old, he lied about his age. In 1973 Hagler won the National AAU 165-pound title and he never looked back. He completed his amateur career with a 55-1 record before turning professional.

Hagler’s reputation grew as he climbed the ladder to the top of the middleweight classification; his frustration of high-profile boxers avoided fighting him mounted, prompting Heavyweight boxing legend Joe Frazier to say of Hagler, “he was a triple threat, he was Black, a southpaw (left hander) and he was very, very good.” It was by chance that Hagler’s career took a turn when only with two weeks’ notice. Hagler was offered a fight against a Frasier trained boxer named Willie “the worm” Monroe, who in a close fight, left Monroe the winner, and giving Hagler the first of only three losses that he would experience. Both Hagler and Monroe would fight two more times, with Marvin winning both bouts. Hagler’s rise to the top excelled when big time promoters began scheduling fights with Hagler as the main event on the boxing cards, this at a time when the Heavyweight class was dominating professional boxing.

In his first fight for the Middleweight Championship, Hagler lost in a close fight to reigning champion Vito Antuofemo in November 1979 at Caesars Palace in Las Vegas. After Antuofemo lost his title to a British boxer Alan Minter, Hagler got a second shot at the Middleweight championship. The fight was to take place at in England at Wembley Stadium. When the fight ended, and after seven years and 50 fights, Hagler beat Minter to become the World Middleweight Champion on September 27, 1980.

Hagler would defend his title 12 times before losing a close match on April 6, 1987 to Sugar Ray Leonard, giving Hagler his third and final loss and sent Hagler into retirement when Leonard retired (the 3rd of what was to be 5 announced retirements by Leonard). Three years later, Leonard gave Hagler one more opportunity to have a rematch, but Hagler declined as he settled into a life of acting and was not interested in returning to the ring. Known as one of the boxing’s greatest fighters in any of the weight classes, Hagler was knocked down only once in his career, before he walked away.

Although the fight against Leonard was one of Hagler’s most high-profile fights, but it wasn’t THE highest profile fights. On April 15, 1985 Hagler and Thomas “Hitman” Hearns again at Caesars Palace, billed as only “The Fight”, the bout lasted only eight minutes and one second, but it was named the “Fight of the Year” by The RING magazine. As Hagler overwhelmed Hearns at the end of the third round and it was clear when Hearns collapsed in the arms of Referee Richard Steele’s arms that the fight was called and Hagler won his 61st fight. The highly promoted event was a huge hit in the Pay Per View market and helped usher in a whole new revenue stream to the sport of boxing.

Hagler’s career record after 67 professional fights was 62 wins, 3 losses and 2 draws. He fought matches at a rate that most boxers today would not even consider. In his first year as a professional, Hagler’s first professional fight was May 18, 1973. During that first year Hagler fought 8 times including two bouts in October and December. 11 times in 1974, doubling up in May, August and November. 7 fights in 1975, 1976, 1977 before fighting less bouts in each of the following years. Hagler’s fights had taken place all over the world starting in the Boston area to the Philadelphia Spectrum, Madison Square Garden, Atlantic City, Las Vegas to Italy, Monaco.

In 1982 Hagler became so annoyed that the network announcers would not call him by his nickname, he legally changed it to “Marvelous” Marvin Hagler, which when applying for the change, exposed the fact that Hagler began boxing at 14 years old instead of the required 16 years old. Hagler was inducted into the International Boxing Hall of Fame and the World Boxing Hall of Fame as well as being named the Fighter of the Decade (1980’s). Although Hagler grew up in Brockton, MA, having 9 fights in his hometown, before moving all over the New England region (including 2 bouts at our own Providence Civic Center, one at Brown University’s Marvel gym, and one at Providence College’s Schneider Arena). Hagler was the favorite son of Brockton – but he belonged to the New England region.

The New England region is in mourning with the passing of Marvelous Marvin Nathaniel Hagler. Born May 23, 1954 in Newark, New Jersey and died March 13, 2021 at home in Bartlett, New Hampshire. His death was announced on social media by his wife, as “unexpected”. At this time a cause of death has not been released. Hagler is survived by his wife of 21 years, Kay, and his five children: Marvin, Jr., James, Gentry, Celeste, Charelle.

Editor’s Note: Rumors that Marvelous had died after receiving a COVID-19 vaccine spread like wildfire – and yesterday, his wife, Kay, refuted those claims saying she had been the only one to be with him and that this was not true – “For sure [it] wasn’t the vaccine that caused his death. My baby left in peace with his usual smile and now is not the time to talk nonsense.“