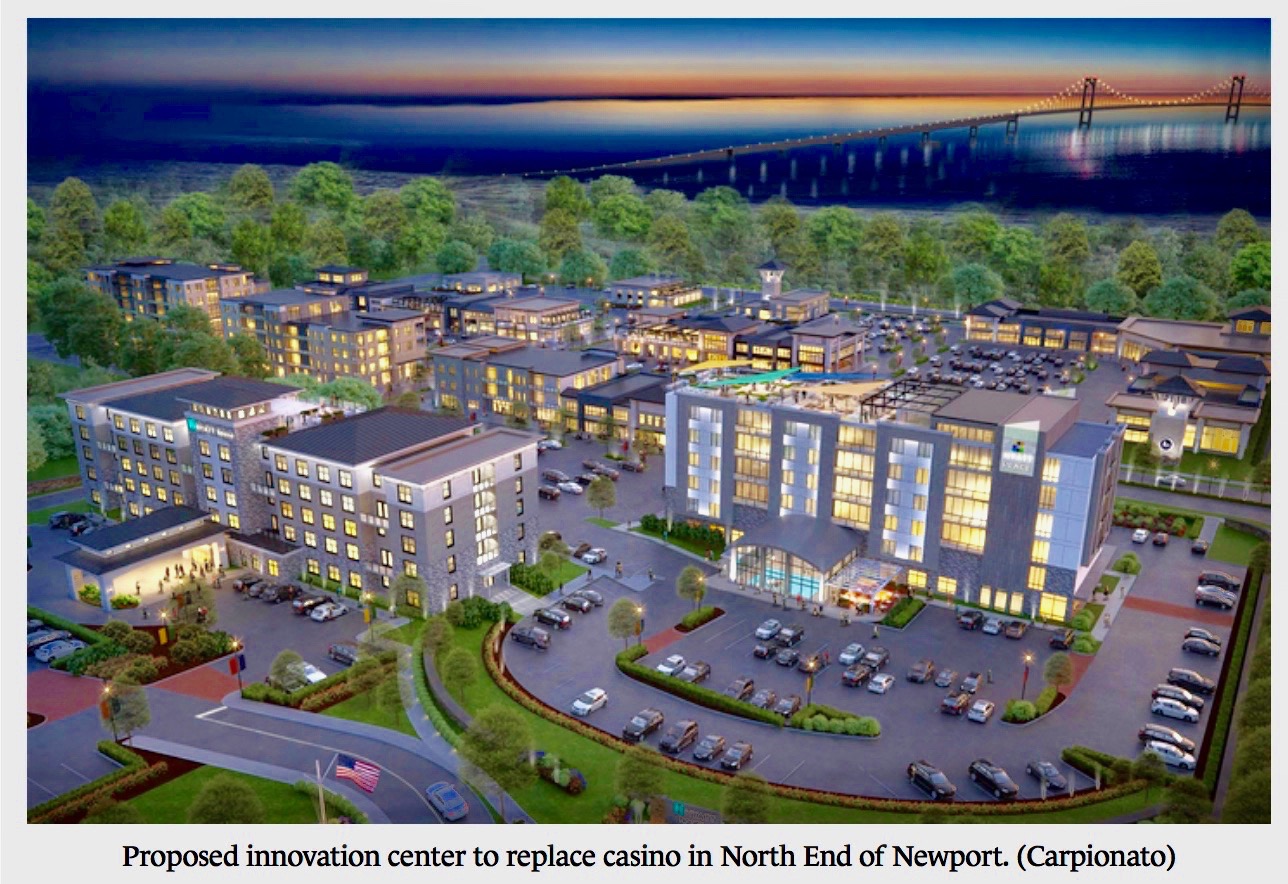 Faced with a development proposal to replace the Newport Grand casino, the City by the Sea recently placed a moratorium on development in order to suck its elegant thumb about its development guidelines.

Bloomberg CityLab published a lengthy article, “History and Gentrification Clash in a Gilded Age Resort,” written by Alex Ulam, describing the conflict over how to amend development regulations. The freeze affected the North End, where the Carpionato Group proposes a major retail and innovation center outside of the city’s historic center, but the ban was lifted in July after about six months. It should be reinstated immediately and indefinitely.

I hasten to clarify for those unfamiliar with Newport that the casino in question is a huge shed marred by flat faux columns, not the famous Newport Casino on Bellevue Avenue designed by Charles Follen McKim.)

The general tenor of the debate over development in the North End illustrates a disconnect common to historic cities with sections of largely intact traditional streetscapes. In a misguided effort to be all things to all people – and hence satisfy no one – Newport seems willing to sacrifice its quality of life and its economic future to a supposed compromise between its historical character and the tainted character of modern development.

“Newport is wrestling with fundamental questions about what kind of city it wants to be,” writes Ulam, “and how to encourage development that doesn’t displace residents or fundamentally change the city’s character.” And who can quarrel with that? But Newport’s new planning director, Patricia Reynolds, was quoted by Ulam as saying:

Our history is an embarrassment of riches. … We are looking for something that respects the character of our city. It doesn’t mean historic-looking buildings — it could be modern buildings with the right proportions.

So let’s encourage new projects that water down the character of our city!

No. Newport must put a moratorium on that.

No place in America is that more appropriate than in Newport. Newport was the leading economic center of Rhode Island until its capture by the British during the Revolution. Merchants fled to Providence and established a solid industrial dominance. In the 20th century, however, both cities suffered from a failure to thrive. Growth in both places was sparse. As a result, Newport is an 18th century city preserved in amber, while Providence is a 19th century city preserved in amber. With few viable alternatives, both cities have built strong tourist economies based almost exclusively on old preserved beauty.

Newport got a long head start and has done much better. Providence has spent the last half-century eroding its historical character with modern architecture, still not truly recognizing the value of its beauty. Newport has effectively frozen modernism out of its historic districts. Except for America’s Cup Avenue, it has preserved entire neighborhoods. But both cities refuse to acknowledge that new buildings of traditional style can strengthen their historic brand, and without sacrificing “authenticity.” In fact, if Providence continues to build ugly at its current swift pace, its economy will falter and Newport could – if it discovers the concept of new traditional architecture – find itself in a position to leapfrog Providence, not just in tourism, where it already leads, but in broader economic measures.

That is why Newport should pause to rethink its development regulations, in the North End but also throughout the city. It should take the bold step of mandating that all new development embrace architecture that reinforces the city’s historical character – really reinforces it, not fake “respect” like that of planner Reynolds. Building in Newport should be held to the highest levels of quality. That will enrich Newporters at every level of income.

“We are not looking for big box stores,” Reynolds insists. But a big-box store designed to truly respect the historical character of Newport is preferable to a set of small-grained shops designed to look like refugees from the bow-wow Bauhaus School revolutionaries of 1919 Germany, when a cabal of architects decided, foolishly, that all buildings should look like the Machine Age. That delusion took over the European architecture establishment after World War I and the American architecture establishment after World War II. Most U.S. cities drank the Kool Aid. But not Newport. Unlike most U.S. cities, Newport never embraced that delusion – but it must still protect itself from forces that, in every city urge planners to continue drinking the Kool Aid.

The idea of an innovation center such as proposed by Carpionato, but housed in beautiful buildings inspired by the best traditions of the past – now there’s a truly transgressive idea that might appeal to a wide spectrum of the public.

Since Providence apparently will not, Newport should boldly go where no city has gone before by demanding that developers build what the people want, not what the befuddled design elite wants. Let this revolution begin in the North End.