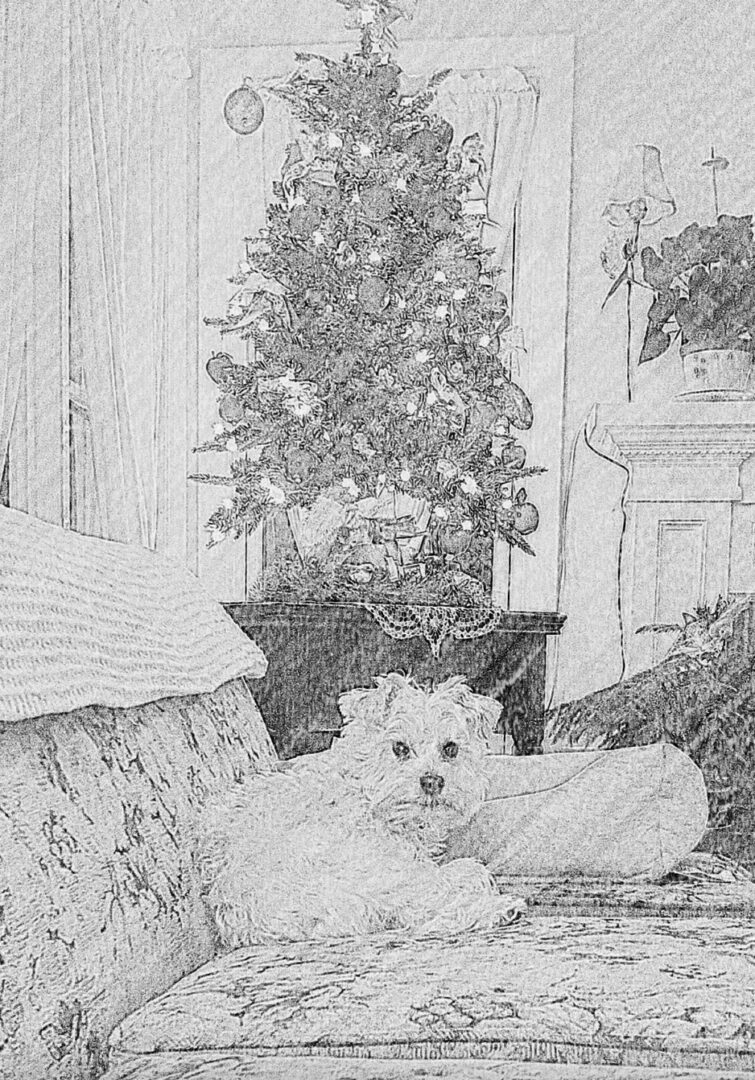 “What, where, how?” he shook his head, then his body, rose from his seat feeling lighter than he had in days.

“You there,” he said to the cat that sauntered past him.

The cat ignored him.

“A wonderful cat, an intelligent cat!” he said out loud, and approached the lovely creature. “Can you please tell me what day this is?” he asked again.

“It’s Christmas Day, you knucklehead,” she said, and kept on walking.

“Christmas Day!” said Mr. Wilson, and he scurried around the house, ran under the Christmas Tree, rang bells and jumped on the furniture. Sitting atop the sofa, he gazed outside, into a world most bright and cheery. Three dogs walked past with their owners, quickly, so as not to disturb the barking thing that inhabited the window most days.

“Hello my friends!” barked Mr. Wilson, and the three looked as one, and barked a hello in reply.”

“The Spirits did it all in one night!” Wilson exclaimed as he jumped onto the bed that his Mom and Dad slept in. “I’m as light as a feather,” he declared to nobody in particular, “as giddy as a drunken man!”

“Wake up everybody! It’s Christmas Day!”

And that moment was the end of Mr. Ebenezer Wilson Scrooge. Never again did he allow his spirit to diminish, no matter how difficult his existence became. He kept Christmas in his heart that day, and every day, and dedicated his life to being the happiest, most agreeable fellow he could, and by doing so touched the lives of every person who met him. Some say that his very presence in the world made such an impact that more and more people adopted homeless pets, and brought them to their homes and made them part of their families.

Mr. Wilson and his family spent their day surrounded with love and good cheer. They ate, and drank, and danced and sang, exchanged presents and told stories of times past, enjoyed the present and looked forward to a bright future.

When the festivities were through, and the house was silent once more, Mr. Wilson looked around at the home he called his own, thought of the spirits that guided him, placed his tired little head on his paws, and said, “God bless us, every one.”