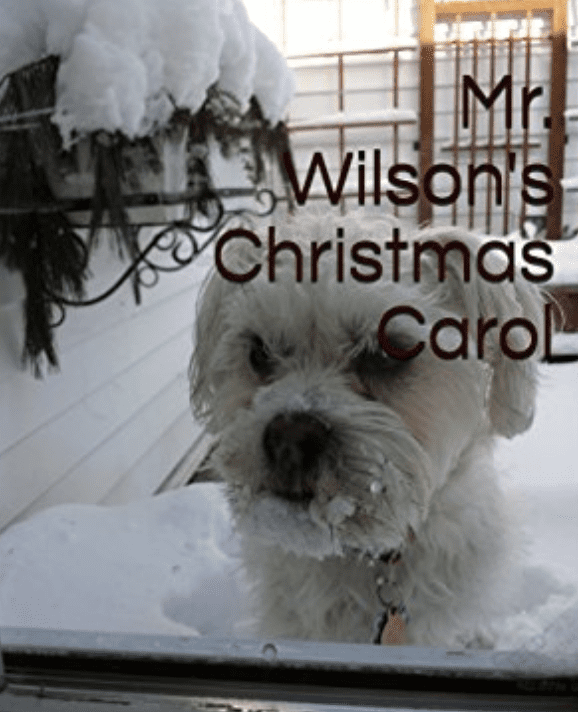 Good old Mr. Wilson has lost his Christmas Spirit. Can the Ghosts of Christmas Past, Christmas Present and Christmas Yet to Come lead him to redemption?

Here is my Christmas Carol in its entirety, starting today and continuing to Christmas morning. If you’re enjoying it please consider sending a copy to a friend. I donate all proceeds from the sale of the story, ($0.99) to local animal shelters.

“I am no longer Mr. Wilson!” declared the former Mr. Wilson. “From this day forward; Christmas Eve, until the end of time, I shall be known to all as Mr. Ebenezer Wilson Scrooge!”

“Is that so,” I asked my companion. “And why, pray tell the sudden change of heart? You have been a most agreeable fellow these last years.”

“Every year, year after year, all five of my years in fact, I have been forced to endure the nuttiness that envelops this house this time of year. And all for what I ask?”

“Well, it is Christmas after all.”

“Christmas, Shmistmas, just another day to eat too much, sing too much, drink too much and ignore poor old Mr. Wilson too much! Humbug, I say!”

“Surely you don’t mean that, Mr. Wilson!” I implored. “This is the best time of year! Summer is through, fall has passed, winter is upon us, and with the cold comes a chance to rest a little, reflect a lot, enjoy the warmth of a hearty fire and the taste of your mother’s delicious stew!”

“Ha! A taste of Mother’s stew he says! Humbug! If I get a teaspoon of that stuff it will truly be a Christmas miracle!”

“You have a point my kind young friend, but you do have a bowlful of food two times a day, and fresh water at all times, surely you must be happy with that?”

“The same thing day in, day out, it’s a wonder I don’t die from boredom.”

“But what of those poor dogs without a home and little to eat? Cannot you find some compassion in that heart of yours to wish them goodwill, especially on a night such as this?”

“Are there no dog pounds or shelters?”

“Oh, there are indeed, kill shelters where unwanted animals live out their lives waiting for rescue, and many, I am sorry to say, never know the love and warmth you now enjoy.”

“Humbug,” said cranky old Scrooge Wilson, then stomped his paws in a most disagreeable fashion and stormed out of the room, but only after nipping his former good friend Luna the Cat on the ear.

“What’s up with him?” she asked as she made herself comfortable on my lap.

“I think he needs a little alone time,” I said to my cat as we both prepared for a late-afternoon snooze. “Perhaps he’ll return to his usual self tomorrow. I hope when I return from work he is back to his usual merry self.”

Mr. Wilson Ebenezer Scrooge retreated to his new favorite spot; a dimly lit corner where an old chair sat against a wall, a forgotten place in an otherwise happy home.

“Humbug,” he said miserably, lifted his leg and peed on the floor.