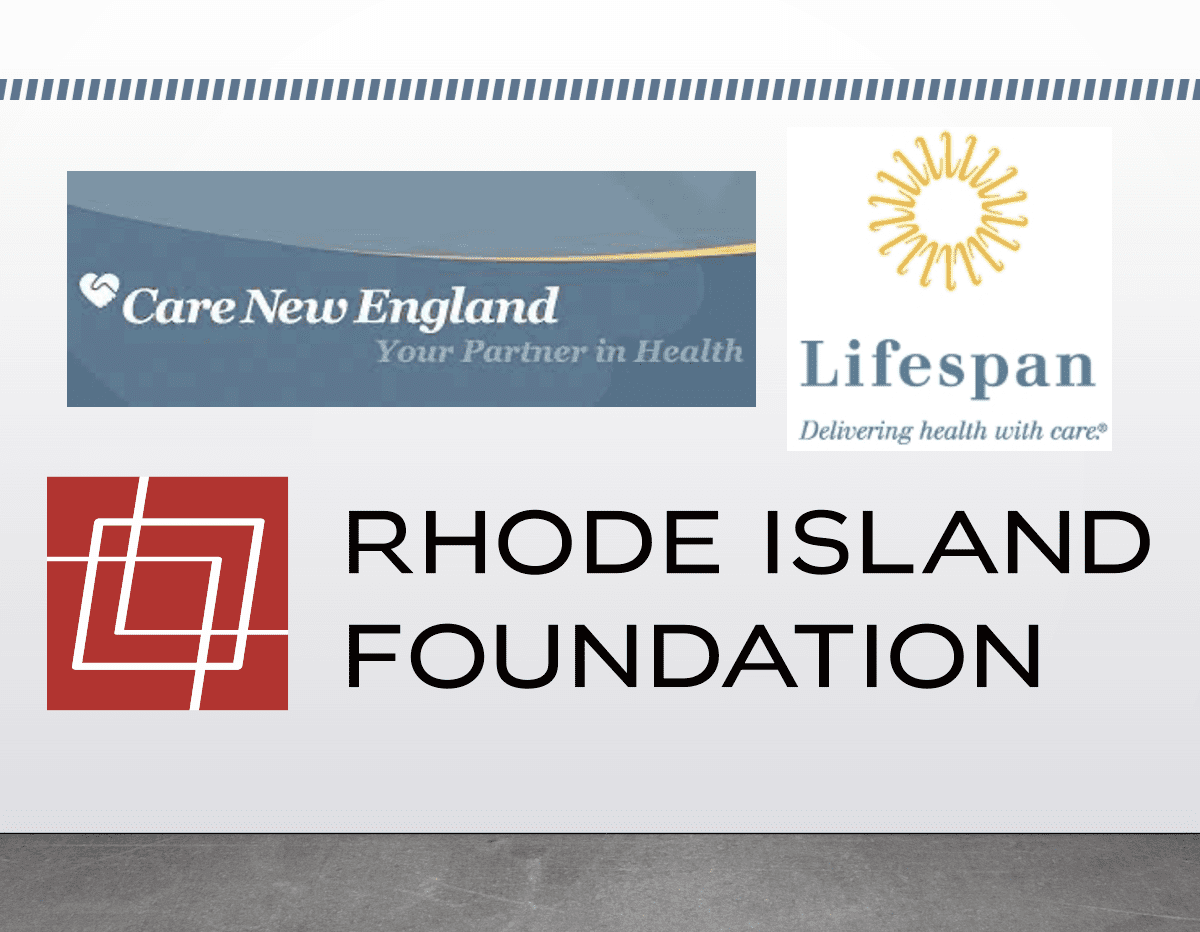 The RI Foundation weighs in with its assessment of the proposed merger of Care New England, Brown and Lifespan — but what is missing?

It was big week for news around mergers of health systems in Rhode Island. R.I. Attorney General Peter Neronha announced that application under the Hospital Conversions Act for the proposed merger of Care New England, Lifespan, and Brown was complete, setting the time clock ticking away for a decision to be made by mid-March.

At the same time, the Rhode Island Foundation released its community-driven assessment by stakeholders establishing parameters around quality, cost, equity, and access for the proposed merger, providing briefings to elected officials, the leadership of the two health systems and Brown University, the Attorney General — and the news media.

Not having been invited to the media briefing in advance of the release of “Ensuring the Integrated Academic Health System Benefits All Rhode Islanders,” the Rhode Island Foundation-led report analyzing the proposed merger of Care New England, Lifespan, and Brown University, ConvergenceRI spent some time this week poring over the full 70-page document, looking for evidence.

• Were there any specifics to connect the well-written words to a plan of action? ConvergenceRI read the report on four different occasions, but came away puzzled by the apparent lack of specifics.

All the words and phrases and emphases on the principles around equity, access, oversight, quality and cost hit all the right notes, for sure.

Take, for instance, the recommendation: “The merged system will agree to support meaningful payment reform, and should commit to continued participation in cost containment processes, such as the Rhode Island Health Care Cost Trends project.”

Sounds good. The problem is not with the intent, but rather, what the data have already told us: The number-one driver of increased health care costs in Rhode Island is prescription drug costs, as identified by the cost trends analyses. [See link to ConvergenceRI story below, “Prescription drug costs, not utilization, are driving high health costs in RI.”]

And, that data analysis came directly from the Health Care Cost Trends Collaborative Project, which said, as ConvergenceRI had reported earlier this year:

ConvergenceRI reviewed the written document again, but nowhere in the carefully manicured report did there appear to be any substantive discussion of how the merger would/could/should address, tackle or solve the ever-escalating prescription drug costs in Rhode Island.

The intent, of course, was commendable – to move away from the fee-for-service payment model that seemingly rewards quantity of care over quality of care.

Easier said than done. The question that needs to be asked about “meaningful payment reform” is: For whom?

Almost all the current work on payment reform in Rhode Island has been done under the guise of reinventing Medicaid, through the creation of accountable entities as a cost control function of the private, managed care organizations “managing” the care of Medicaid members.

Translated, the social engineering of “payment reform” has been practiced upon the “have not” population of Rhode Island residents, roughly one-third of the state’s population, with meager outcomes and results achieved to date.

In contrast, the specialty practices owned, affiliated or controlled by Brown Physicians, Inc., have been under no such regulatory oversight when it comes to transitioning from fee-for-service to value-based alternative payment models.

Once again, ConvergenceRI went back to re-read the “Ensuring the Integrated Academic Health System Benefits All Rhode Islanders” report, looking for evidence regarding how Medicaid fits into merger plans, with no luck.

Returned from re-grooving?
The reality is that the Accountable Entity “pilot” program is now entering its fifth and final year, and there is no sustainable funding source yet identified to support its continued operations.

Further, one of the largest segments of Medicaid spending, “long-term services and supports,” has yet to fully implement an accountable entity program. A large portion of “long-term services and supports” funding now goes to pay nursing homes for care of their residents, but the proposed accountable entity program being developed under the R.I. Medicaid Office plans to invest in the creation of additional supports for home-base care.

To be perfectly clear, in terms of controlling cost of care, approximately one-third of all Rhode Island residents receive health care coverage through Medicaid, mostly delivered by federally qualified community health centers. And, as many budget hawks in the Rhode Island news media corps will remind you, Medicaid, including both state and federal funds, accounts for roughly one-third of the state’s annual budget.

When reality intervenes
It can be argued, perhaps, that any discussion of a merged Integrated Academic Health System in Rhode Island does not need to focus on what happens with Medicaid, but rather Medicare, when it comes to payment reform. But three separate news items from last week would seem to argue otherwise.

• The first was a news conference, held on Wednesday, Nov. 17, by Dr. Nicole Alexander-Scott, director of the R.I. Department of Health, and Ana Novais, R.I. Executive Office of Health and Human Services Assistant Secretary, at which they urged Rhode Islanders to only go to emergency departments for health issues that require emergency care, because hospital emergency departments in Rhode Island are continuing to experience significant crowding and prolonged wait times.

Translated, the underlying problem, which was exposed during the coronavirus pandemic, was that patients tend to vote with their feet – and lacking access to primary care providers and proper health insurance coverage, many folks – including many from the more vulnerable populations, seek care through the ED.

The question to ask is: How many folks who are going to the hospital ED for health care are Medicaid members or have health insurance plans with high co-pays?

• A second important news item was the joint news release put out by the R.I. Health Care Association and LeadingAge Rhode Island, representing the state’s 77 nursing homes, announcing the results of a recent survey on staffing, saying that Rhode Island’s nursing homes are in crisis, as staffing shortages are crippling the industry, with more than 1,900 open positions, including 983 openings for CNAs and 447 openings for RNs and LPNs.

Translated, the difficulty in paying employees a livable wage, exacerbated in large part by the state’s failure to increase Medicaid reimbursements for nursing homes, has precipitated a staffing crisis. The question to ask is: What are the financial projections of losses for nursing homes in the coming years, compared with the rate of reimbursements from the state for Medicaid?

• A third important news item was the fact that the current R.I. Medicaid Office director, Ben Shaffer, resigned from his job last week. It is unclear why he decided to leave, after having survived the fallout from UHIP and the crush of COVID-19.

The question to ask is this: Did it have something to do with the new strategic direction that Gov. Dan McKee’s administration appears to have decided to take in regard to Medicaid?

The McKee administration is seeking to broaden the number of potential bidders to become managed care organizations, expanding from the current three MCOs – UnitedHelathcare, Neighborhood Health Plan of RI, and Tufts Health Plan. Among the new potential insurers expressing interest, responding to a RFI, were Blue Cross & Blue Shield of RI and Molina Healthcare, a California-based company.

Further, the McKee administration has announced its intention to try and reduce the Medicaid population by increasing the amount of money that Rhode Islanders are earning in wages, in an interview with Gov. McKee with ConvergenceRI – as if that would create an equitable situation where folks would no longer be eligible for Medicaid because they were making too much money, but they would be eligible to buy commercial health insurance coverage, either through their jobs or through the health insurance exchange. What is wrong with this picture? And, how would the proposed merger address any of this?

Ain’t misbehaving
Under the principle of “Access,” the report recommends that:

• The merged system must commit to increasing physical points of access to primary car and behavioral health care, ensuring that at least 90 percent of patients served can access appropriate care in a reasonable amount of time within five years of the merger.

Once again, great intent, great wordsmithing, but evidence of the details about how to accomplish this as an outcome appear to be missing in the document, as best as ConvergenceRI can discover.

Because the underlying problem about accessing mental health and behavioral health care in Rhode Island is the fundamental problem of a lack of reimbursement paid to providers, mostly from community agencies, who are the ones on the front lines.

Community agency executives, such a Benedict Lessing, the president and CEO of the Community Care Alliance, and Cortney Nicolato, president and CEO of United Way of Rhode Island, have written forcefully in recent weeks about the failure to invest in community agencies and their staff. Word reached ConvergenceRI on deadline that Early Intervention services in Rhode Island have stopped taking on new patients, which one leading doctor called “a disaster for communities of color.”

What does all this have to do with the proposed merger between Care New England, Lifespan, and Brown University?

If there was any doubt about how the opioid epidemic has changed Rhode Island, perhaps the members of the select stakeholder committee who worked on this document should have taken the time to view one of the recent episodes of “Dopesick,” based on the writings of Beth Macy.

Not to address the opioid epidemic, front and center, as an integral part of any propoed merger, seems disingenuous at best. As Dr. Jill Maron, director of Pediatrics at Women & Infants Hospital said in an interview with ConvergenceRI this week, “Babies are not algorithms.”

Where do we go from here?
Many of the participants in the stakeholder group that worked to prepare this report are some of the best practitioners of health care in Rhode Island, for sure. The problem, in ConvergenceRI’s view, is that the document needs to be seen as a starting point, not an end point, needing to be revised and challenged, in a public process – hopefully in a way that the Rhode Island Foundation does not take umbrage at having its work being challenged. The question is: How does that happen?

• Why would Lifespan want to hire former R.I. House Speaker Nicholas Mattiello as a lobbyist to work on the proposed merger? Can you spell empathic break?

• What is the current status of the Senate Commission looking at R.I. EOHHS? It would seem many of the issues discussed around the delivery of social, health and human services in Rhode Island could serve to inform issue related to the proposed merger. [See link below to ConvergenceRI story, “To have and have not.”]

• How will the importance of creating a stable, sustainable financial base for Women & Infants Hospital, including making investments in new treatments and technologies around the care of newborns, be seen as a priority?

Read all stories by Asinof for RINewsToday, here: