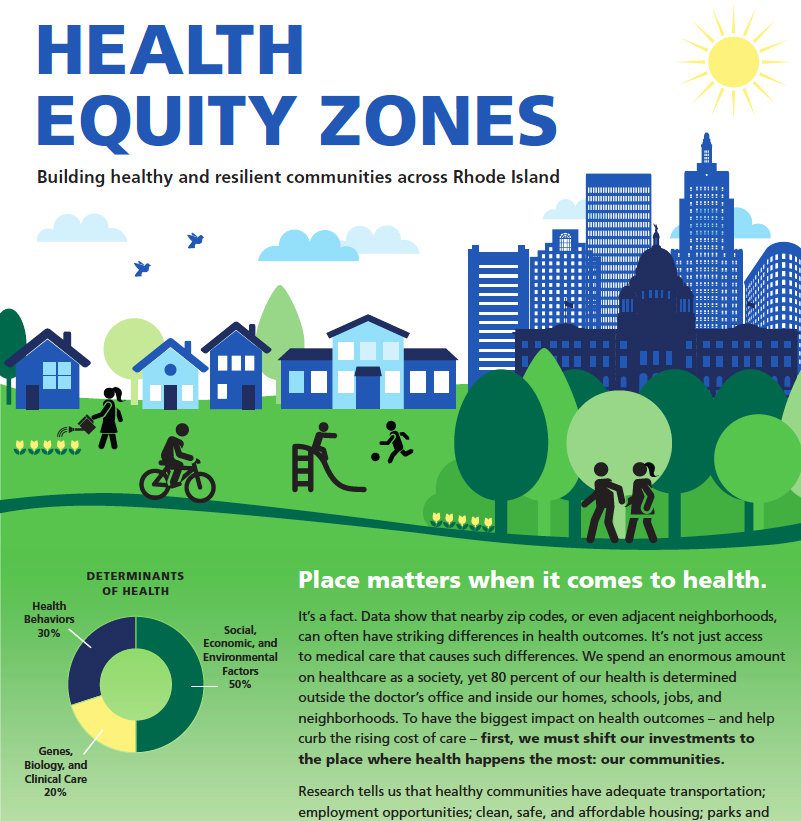 Health Equity Zones keep gaining strength and traction in Rhode Island and attention across the nation, even as the current operating business model for hospitals becomes more and more challenged financially

No one, really, should have been shocked or surprised by the news last week that Lifespan reported a loss of $35 million in its last fiscal year and that the largest private employer in Rhode Island was now considering layoffs as a way to close its widening revenue gap, according to the health system’s president and CEO, Dr. Tim Babineau.

[Or, for that matter, that Care New England had reported a profit of $3.8 million for its 2019 fiscal year, a turn-around from previous losses, even as its flagship hospital, Women & Infants, was said to be struggling financially.]

Except, perhaps, by those who had been held captive of a skewed news narrative, which promoted the dream of a Camelot-like Rhode Island academic medical enterprise, the attempt to broker a marriage between Lifespan, Care New England and Brown University, led by Gov. Gina Raimondo, and championed by Brown University President Christina Paxson, as the ultimate Rhode Island eds and meds enterprise.

The narrative had been fashioned as an integral part of the last-minute intervention in early June of this year by Gov. Raimondo, preceded by an aggressive media persuasion campaign by Lifespan, to forestall the takeover of Care New England by Brigham and Women’s Hospital, a division of Partners Healthcare in Boston.

Despite all the hype promoting the narrative, as well as the arm-twisting and the appeals to Rhode Island chauvinism, the proposed deal fell apart two months later, in July, amid much acrimony, as Care New England chose to go its own way.

What went wrong?
What did the news media get wrong about the story? The facts missing from the reporting and analysis included the underlying root causes of the ongoing economic distress experienced by hospitals operating in Rhode Island and their slim operating margins. [In the skewed narrative, Lifespan was often portrayed as a healthier financial health system, compared to Care New England, rather than reporting both as troubled.]

Yet, at the time of the proposed deal, numerous sources had told ConvergenceRI that Lifespan was “hemorrhaging money,” as ConvergenceRI wrote in its June 5, 2019, story, “Matchmaker, matchmaker, find me a find, catch me a catch.” [See link to story below.]

The bottom line, the story had continued, was this: “The current business model for hospitals is not sustainable, and the focus on health care as a commodity by health systems is a significant barrier [to future prosperity].”

Lifespan’s Babineau appeared to admit as much, perhaps unintentionally, when he attempted to blame Lifespan’s financial shortfall on the closing of Memorial Hospital and the gap in reimbursement rates from Medicaid and Medicare for inpatient hospital care, in an effort to deflect attention from what some health care insiders have labeled the shortcomings of his own truculent management style.

Achieving health equity in RI
At the same time, there continues to be an important, under-reported news narrative about the changing health care landscape in Rhode Island, reflective of major pendulum swing toward achieving health equity, and the success of an innovative initiative being championed by the R.I. Department of Health in creating Health Equity Zones, on the verge of being replicated nationally.

In the same story that had reported on Lifespan’s financial difficulties, ConvergenceRI had written:

• “Despite the sea change in the shift in investments by the Rhode Island Foundation to focus on place-based health outcomes, not just clinical health care, a discussion of health equity and community-based solutions to improving health outcomes did not appear to be a significant part of the conversation about merging health systems.”

The basic premise of Health Equity Zones goes as follows: “We spend an enormous amount on health care as a society, yet 80 percent of our health is determined outside the doctor’s office and inside our homes, schools, jobs, and neighborhoods. To have the biggest impact on health outcomes – and help curb the rising cost of care – first, we must shift our investments to the place where health happens the most: our communities.”

In recent months, evidence of the growing traction of the work of Health Equity Zones has begun to be more visible as an integral part of the changing culture of the health care landscape in Rhode Island. Examples include:

• The adoption of Health Equity Zone data as part of the community needs assessments conducted by both the Hospital Association of Rhode Island and by Lifespan;

• The adoption of a series of four health equity indicators created by the Health Equity Zone initiative as part of the Rhode Island Life Index, a project of Blue Cross and Blue Shield of Rhode Island, in partnership with the School of Public Health at Brown University.

• The focus on health equity in advancing the integrated primary care practices, under the direction of the Care Transformation Collaborative.

• Plans to look at the formal integration of Health Equity Zones into the Accountable Entities program under Medicaid, at the direction of Womazetta Jones, the secretary of the R.I. Executive Office of Health and Human Services.

“We see that not as a tangential or extra thing, but [something] that the program should do, something really integral to what the accountable entity is trying to accomplish,” explained Patrick Tigue, the director of the R.I. Medicaid office, in a recent interview. “It’s always had a focus on what we now call the social determinants of health; we all know that to get to the true quality outcome, the biggest driver of those are things outside the health care system.” [See link below to ConvergenceRI story, “A change is going to come.”]

To get a better understanding of how Health Equity Zones are changing the narrative around the health care landscape in Rhode Island, ConvergenceRI spoke last week with Ana Novais, deputy director at the R.I. Department of Health. Here is the ConvergenceRI interview with Novais.

I can talk about growth and expansion within the state, but there is also a component of expansion outside of the state.

Starting with expansion within the state, it makes sense to talk about sustainability first, because you cannot expand if you do not sustain. We are doing a few things in terms of trying to sustain the initiative the program, working with the Governor’s office in trying to make sure that a request for state funding to support the infrastructure of Health Equity Zones is going to make it into the Governor’s budget. I am hopeful.

We continue to seek implementation funding through a variety of funding streams, from both public and private foundation money.

In terms of sustainability, we are developing a new brochure to help us engage with local businesses, by asking them to join a Health Equity Zone in their area of influence, to become a partner, and to contribute as they see fit.

A third component of potential expansion is looking at how we engage with other state agencies in Rhode Island, to support the implementation of priorities of Health Equity Zones, working in collaboration with the Medicaid office and Accountable Entities, with the R.I. Department of Behavioral Healthcare, Developmental Disabilities and Hospitals, and with Rhode Island Housing.

ConvergenceRI: Have you been pleased with the way that community needs assessments conducted by hospitals and health systems have incorporated the data collection from Health Equity Zones in their analysis?
NOVAIS: Yes. The hospitals have embraced the needs assessment, or the assessment, as I like to call it – because it includes needs but also assets and strengths, that were done by the Health Equity Zones.

They discussed the findings [of their own assessments] with the Health Equity Zones as a way of trying to see where there is an alignment, or not, and to be able to [capture and] reflect upon community input on that needs assessment.

That being said, I believe more could be done in terms of alignment. Ideally, we will get to a place – but it has to be part of the expansion of the health equity zones, where one could say that there is no need for a separate entity to do a health assessment, because [the assessment] is already being done by the community – but that would only be possible if the entire state was covered by Health Equity Zones.

Until then, we will continue to have this mixed bag of incorporating [the data] from where there is already a Health Equity Zone in place, and using them as a sounding board and a check when there is not, or even when there is, more broadly.

ConvergenceRI: From the outside looking it, the changes seem impressive, if under-reported. How important is it to be patient in pursuing changes.
NOVAIS: People have investments in their agendas and priorities. What we are slowly hoping to do is to change the culture, where we all come to the table with our own individual agendas, and we get to a place where people are bringing not just their own agendas, but the expertise that they have, the resources that they have, to serve a common agenda that is revealed [in conversations at] that table. That doesn’t happen overnight.

There is definitely the financial component to be able to sustain and expand the Health Equity Zone initiative, but there is also the cultural shift and change that is required, which is a different way of looking at public health, a different way of looking at what drives health outcomes, recognizing the need to validate the community voice in deciding what health is, in the designs for health care access, and the landscape for health care. How do we truly change the health system?

ConvergenceRI: How did you view the first edition of the survey conducted by Blue Cross and Blue Shield of Rhode Island, in partnership with the Brown University School of Public Health, to create a Rhode Island Life Index?
NOVAIS: I see the Rhode Island Life Index as a very positive next step, as an attempt to reflect on the quality of life and what is happening on the ground. I was happy to see housing [emphasized], because, as you know, in all of our Health Equity Zone assessments, housing is one of the priorities.

More importantly, was their recognition not to approach the issues of health, in a silo-ed fashion. In fact, they reached out to us and they endorsed our four health equity indicators.

When they launched, we were part of the conversation; we were on a panel to discuss how to complement each other and how not to exclude the other. There was recognition that only in partnership are we going to be able to truly accomplish what we need to accomplish in this state.

And, to support sustainable cultural change, there is a need to invest in the evidence through evaluations by external evaluators, to make sure that we are doing is evidence-based, effective and sustainable.

ConvergenceRI: What kind of national interest is there in replicating the Rhode Island Health Equity Zone initiative?
NOVAIS: We have received numerous requests, from outside of Rhode Island, from all kinds of different states and cities, on how to implement their own version of Health Equity Zones as a placed-based initiative.

ConvergenceRI: Could it become part of the political conversation in the 2020 Presidential election?
NOVAIS: It already has. Mayor Peter Buttigieg [a Democratic candidate for President], in his “Plan for America,” has called for implementing a Health Equity Zone in every community in America. He said it when he came to Rhode Island.

For full story with sidebar discussion, go to: http://newsletter.convergenceri.com/stories/what-happens-when-the-news-narrative-flips,5388