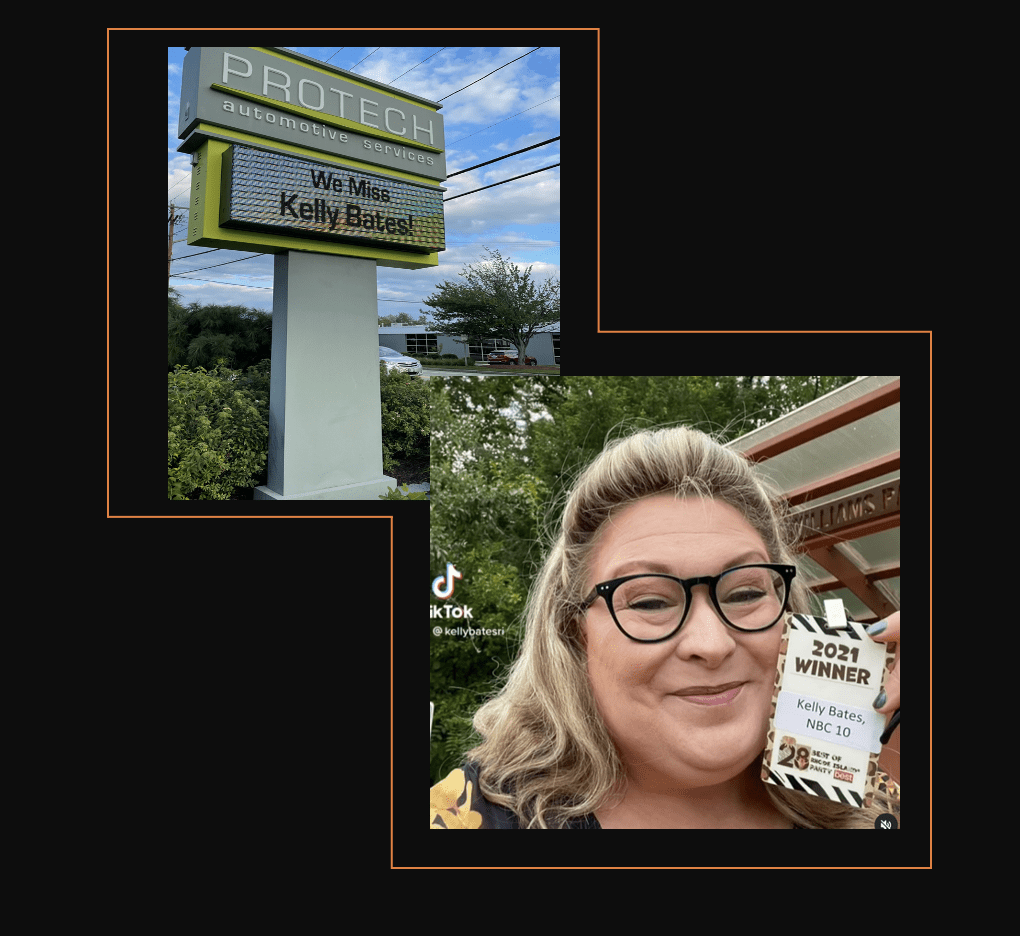 On Tuesday, all of Rhode Island learned that Kelly Bates, a meteorologist and much loved television personality – since 1995 – would no longer be on NBC10. Within moments of learning this, her profile page was removed from the station.

Usually, when things happen like this, other employees are told they can’t say anything publicly, but many of her colleagues on NBC10 have left Twitter messages for Kelly and her fans. Some, noticeably, have not. A bit unusual, but the ultimate in humanity.

On Wednesday morning, Kelly took to TikTok to leave a tearful, heartfelt message of thanks for her fans and friends who have been leaving statements on Twitter, Facebook, Instagram and TikTok.

There’s no question a dark cloud is over Kelly at the moment and over the whole exiting – knowing we will never really know the truth. Usually, agreements with monetary consequences are involved in a high profile leaving – and a non-disparaging clause – as well as a non-compete clause – in exchange for an exit salary and benefit package.

A few months ago Kelly was no longer on the morning set, and a few years ago there was an attempt to let her go, which the station reversed. However it happened, Kelly was dedicated, devoted, and an all around “Channel-10” gal. She shared with us a little bit about her life, her prodigy, her cats! And we loved all of it and only wanted more.

Oftentimes both employer and employee are enjoined from speaking about details as exit packages are negotiated. There are also usually clauses that prevent either side from disparaging the other. It’s usually helpful in these high profile situations to have a statement that can be agreed ahead of time by both parties.

For her part, Bates has responded that things will come out eventually, but she is not free to speak about it now – so media sites claiming they got the real reason why should bear this in mind – no one is going to know until some magic date (in that exit package) passes – IF it ever does, and parties are freer to speak.

Regardless of any meteorologist on Ch. 10, all fine in what they do – when Kelly popped up – morning, noon, evening or weekend – you wanted to say – and often did – “It’s Kelly!” – With a smile from ear to ear and delight in her voice. She regaled at the morning sunrise, the fishing boats going out or coming in in Galilee, and tried to make us listen and heed to warnings to take that patio furniture in when it was windy – and to do more when things got very serious in our viewing area.

One can only wonder about the trips in to the station in all kinds of weather – at all times of day and night – to – do her job – to tell us the weather.

Massachusetts native, Kelly Bates graduated from Lyndon State College with a BS in communications and meteorology in 1995. She began her career the following year, doing weather broadcasts in multiple markets. Bates is an Emmy-nominated weatherwoman and Rhode Islanders voted her as the Best Female Meteorologist in 2013 Kelly Bates came to Rhode Island in 2000, first at Providence’s WLNE. She joined Storm Team 10 at WJAR in 2004.

When we began RINewsToday having a meteorologist was essential – because we know how much the weather means and we intended to publish very early in the day. John Donnelly has been with us from the very beginning, and we see just how many people click in to see what the day will hold.

Then there were all the education appearances – and lifestyle appearances – from the AirShow (our favorite) to fairs and festivals – in her more comfy clothes of golf shirt and pants – Kelly was – and is – the girl next door – our bestie – our BFF – and we will miss you terribly and wait for your next appearance!

Now a petition. Fans and viewers have started a petition to bring back Kelly. While this is unlikely to be successful, it is something that perhaps the “powers that be” should see and respect in how corporate decisions with the dollar as the bottom line, can impact not only the person – but viewers – viewers who may change their viewing habits! There is a link at the bottom of the article, as well as Kelly’s tearful TikTok.

Kelly took to a TikTok video to address all those who have spoken up in her support:

Update: In a statement to the Boston Globe from Bates: “While I respect the fact that WJAR management leaders are entitled to compensate employees with wages and benefits at their discretion, I found myself unable to continue working at NBC 10 under existing arrangements. Leaving this job was one of the hardest decisions I’ve ever had to make. I loved my job at NBC 10 and it makes me profoundly sad to leave it after 17 years.”

Bates said she has no future plans but was asking for a PR company to let her know if they had an opening. She also left a melancholy message about being 49 and “round” and saying that her television career was effectively over. For now she’s taking some senior weather classes.

Update: On 9/9, Bates left this message on Facebook: Greetings my friends! What a whirlwind the last few days have been, to say the least. I am profoundly grateful for all of the amazing support I have received – I never in a million years would have expected the reaction that my leaving NBC10 would amount to. I’m incredibly grateful to all of you. Over the years at WJAR I’ve met some of the most amazing people anyone could be lucky enough to know, and many of them are my good friends. I know the last few days have been upsetting to all of us, but I have an important request… please do not put the burden of this event on my newsroom friends. They have been some of the most important people in my life over the years. I deeply respect and appreciate them, and I’m saddened to learn they’ve been on the receiving end of some hard feelings. While I’ve had my disagreements with management, there are many at NBC-10 who have stood by me and I consider excellent people. I’d respectfully ask that if you are motivated to advocate for me, please be kind to the newsroom staff of WJAR. I appreciate all of you, and I can’t express how much your devotion to me has rocked my world.

We know any station would reap the rewards in viewership and loyalty to have Kelly on board. But to all the young’uns employed in the field today – watch what has happened and know that broadcast journalism is a tad ruthless – and as advisors tell us today – always have something else you can do.

We’re reminded, too, of Gene Valicenti who said that Frank Coletta taught him to have an empty desk and if the hammer comes for you – just grab your keys – and walk away. Very sad to approach a career which asks and takes so much out of one’s personal life (rising time of 2am alone), but more and more the best advice as we approach our employment as more of a job than a career.

Best to you Kelly! Read the lyrics to Dr. Seuss’ “Oh the places you’ll go!” – Because you will:

You’re off the Great Places!
Today is your day!
Your mountain is waiting.
So…get on your way!