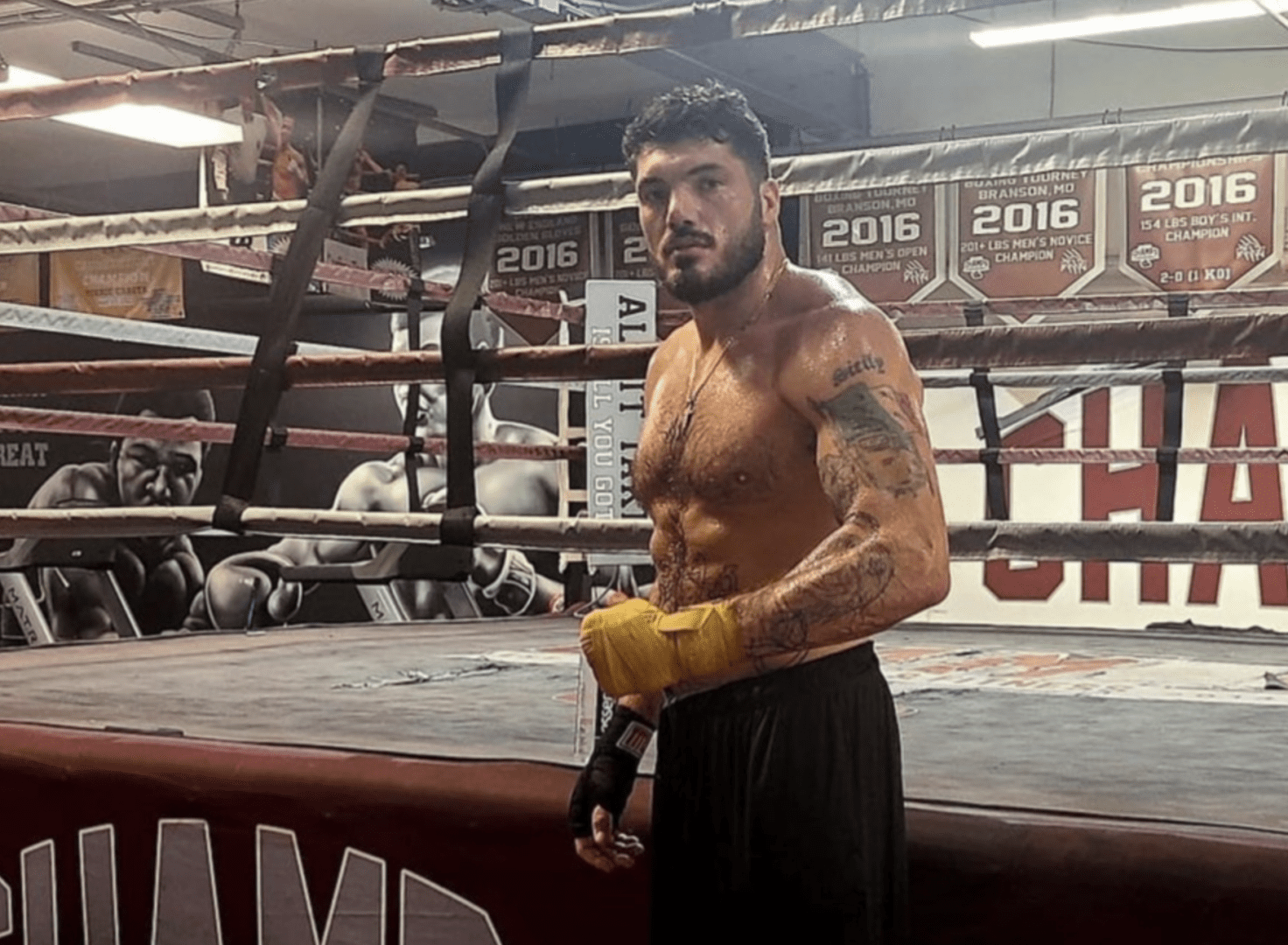 Juiseppe Cusumano, closing in on a world title – Brendan Higgins

There are many complimentary words to describe this heavyweight boxing champion. If I were forced to use only one word to describe him, the word I would choose is “perseverance”. He is a proven warrior in the ring. He hits like a sledgehammer. He is as humble as he is respectful. He has been to the mountain top. He knows what that feels like. He has also stood at the gates of hell. Yes, he has experienced that as well. That’s why he is all heart. Most importantly, Juiseppe Cusumano is still standing tall. His story is incredible, and the next chapter is about to be written.

I had an opportunity to interview the man known as “The Sicilian Nightmare” at a recent press conference for CES Boxing. He is as Italian as it gets, but he speaks with a distinctive Virginia southern accent. The sound of his voice adds to his charm. The best part is he isn’t even trying. It’s just who he is. His upcoming fight will be held August 20th, at the Mohegan Sun Arena. The theme of this mega-boxing card is entitled Summer Heat. Needless to say, Cusumano is ready for the challenge.

He was born in Sicily, Italy, on May 7, 1988. He recalled, “I moved to the states when I was seven years old. When I was nine, my parents separated. I went to live with my mother’s side of the family. I learned how to fight on the streets in the hood. Boxing was a big part of my childhood. My father was an Evander Holyfield fan. I loved Mike Tyson. We would butt heads when they used to fight. I loved boxing right away. I met my trainer, Robert “Machine” Matney, in Virginia Beach, before I was ten years old. I started boxing [when I was] really young. I was crazy as a young kid. I was in and out of the gym. I was just a kid, doing things kids do.”

Juiseppe was an all-around athlete growing up in Virginia. In addition to boxing, he was a standout in football and hockey. He was a quarterback with a strong arm but because of his size they wanted him to play defensive end. In his heart, he would have preferred playing quarterback. However, he did what his coaches wanted and played where he was needed on the field. He was a goalie when he played ice hockey. He moved around quite a bit growing up. His family moved during his senior year. He graduated from Cox High School in Virginia Beach, Virginia, in 2008. During our conversation Cusumano revealed he also loves to play golf. He said, “I played golf for George Washington High School in Danville, Virginia. I made it to states two years in a row. At one time I had a four handicap. I love golf. It’s one of my passions. I don’t get to play much these days because I’m on this run with boxing. I really miss playing golf.” The more I listened to Juiseppe, the more I liked him. He was very open and honest talking about the ups and downs of his life. I asked Cusumano who he admired in the boxing community. He said, “I like the people who had a really tough life. My life has not been easy. I moved around a lot. Sometimes life can be much harder than boxing.”

I asked Juiseppe who he admired in the boxing world. Without hesitation, he enthusiastically said, “Rocky Marciano. I love The Rock!” When I asked him who he admired outside of boxing he continued to surprise me. Again, without hesitation he said, “I was a big Drew Bledsoe fan. What an arm he had. He had that Hail Mary arm. He could really air it out. I felt connected to him. I wasn’t really a Patriots fan. I just liked Bledsoe a lot. My team is the Chicago Bears.”  I asked Juiseppe who else he admired. He responded softly with an emotional tone in his voice saying, “Jesus Christ. His story is great.” We both stood for a moment in silence after that. I was blown away by his honest answer.

Juiseppe continued, “When my trainer, “Machine” died, I got into drinking and drugs, I gave up on life for a while. I took three years off from boxing. Jesus Christ saved my life many times. I was blessed to actually feel the holy spirit once, so I know he’s real. That was a blessing. Jesus is number one out of everybody.” When Juiseppe returned to the ring, he started with CES. Jimmy Burchfield is more than a combat sports promoter. He is passionately bonded to his fighters. He cares about them as human beings first. What they might be capable of achieving in the ring is secondary. When Cusumano landed with CES, it was the start of his quest to return to the top of the heavyweight division. Burchfield offered Cusumano a contract, but Juiseppe refused to sign it. He wanted Burchfield to see him spar first. That story is a prime example as to why my one word to describe Juiseppe is perseverance.

During our interview, Cusumano came across as centered and grounded mentally. Physically, he is quite a physical specimen indeed. He said, “I stay athletic. I try to get back on track when things are going wrong. I like to be around positive people in my life. That’s been a problem in the past. When I’m around negative people it makes me negative. Some people get stuck in situations, and they settle for a certain kind of life. I’ve been able to get out of those situations. I think that helps me with my health. Even when I was at my worst, I always talked to God. He put something more in me. He has me on this road. In the past I have been down. I’ve been down with the worst of them. God has been able to put me back where I’m supposed to be. There is always more. As I get older, I realize I have to give back to God. I have to be on the front line for him. I work hard for God. When I’m around negative people, they won’t agree with that. Positive people do see it. They see potential. They see what I’m capable of doing. I’m finding that out more and more with coach Dave.”

Cusumano is referring to his trainer Dave McDonough. I asked coach Dave his thoughts on Juiseppe. He said, “We were aware of him of course. I knew there was a lot more left in the tank for Juiseppe. Having other fighters on CES cards we are always in contact with Mr. Burchfield. About a month before Juiseppe’s last fight I got a call from Mr. Burchfield, he wanted to know what we could offer Cusumano with training. We had a three-way call and I told Juiseppe, look, you are welcome to stay in my house. As long as you are comfortable with our way of training, we could have something. He came to Connecticut, and we started training. I set up sparring sessions. We began to expose him to a whole different world. Where I live allows me to be accessible to New York and New Jersey very easily. We took him to gyms in the Tri State area where there are top heavyweights getting ready to fight. For this last camp he sparred with Joe Smith Jr., Cassius Chaney, George Arias, Price Taylor and Jarrell “Big Baby” Miller.” As for the future, McDonough had this to say about Cusumano, “Myself and head coach Benny Little are doing the ring work with him. First of all, Juiseppe is the hardest worker in the room. We are impressed with his athleticism. We are bringing that out of him more in the ring. I’ve worked with big guys before. When I watch him run, all I can think is he must have been a monster on the football field. He runs like the wind. For a guy his size he is crazy fast. He is a very unique individual. I keep telling him he has to envision himself being world champion. He has the tools to do it. We need a little luck and the right fights. We aren’t searching for power or talent here. He has it all. He also knows where he wants to be. He is putting in the work. He also has me going to church with him. He is about to become a force in the heavyweight division.”

Juiseppe Cusumano made his professional debut on August 14, 2010, in the Norfolk Scope Arena. He knocked out Marcus Patterson that day. He said, “That was a long time ago. I was on the undercard for Hasim Rahman.”  At 34 years old, Cusumano is in the best shape of his life. Almost 12 years to the day he will step in the ring with Justin Rolfe (7-4 5 KOs) of Fairfield, Maine, at the Mohegan Sun Arena. Only time will tell what the next chapter in his career will be. All signs point towards Cusumano fighting for a world title in the near future.

Cusumano made my job easy during our time together. He gave me plenty to write about. During the interview he was most excited talking about his 12-year-old son, Luciano Cusumano. Apparently, this young man is a chip off the old block. He is an athlete just like his dad. He plays baseball and basketball. Juiseppe also gave high praise to Luciano’s mother Christian Parrish. He said, “They live in Danville, Virginia. She was my first love. I’ve known her since I was a kid. She is a great girl. I couldn’t ask for a better mother for my son.”

As for the future, Juiseppe had this to say, “Boxing is a business. I don’t get to pick my opponents. One person I would love to fight is Deontay Wilder. He hits really hard and so do I. That would be a great fight. I still have to prove myself. My trainer Machine always use to say, ‘It’s not how you start, it’s how you finish.’ On August 20th, I intend to finish strong.”

Tickets for CES Summer Heat at Mohegan Sun Arena are going fast. This event is sure to sell out. For more information on all CES Boxing and MMA events visit www.cesfights.com