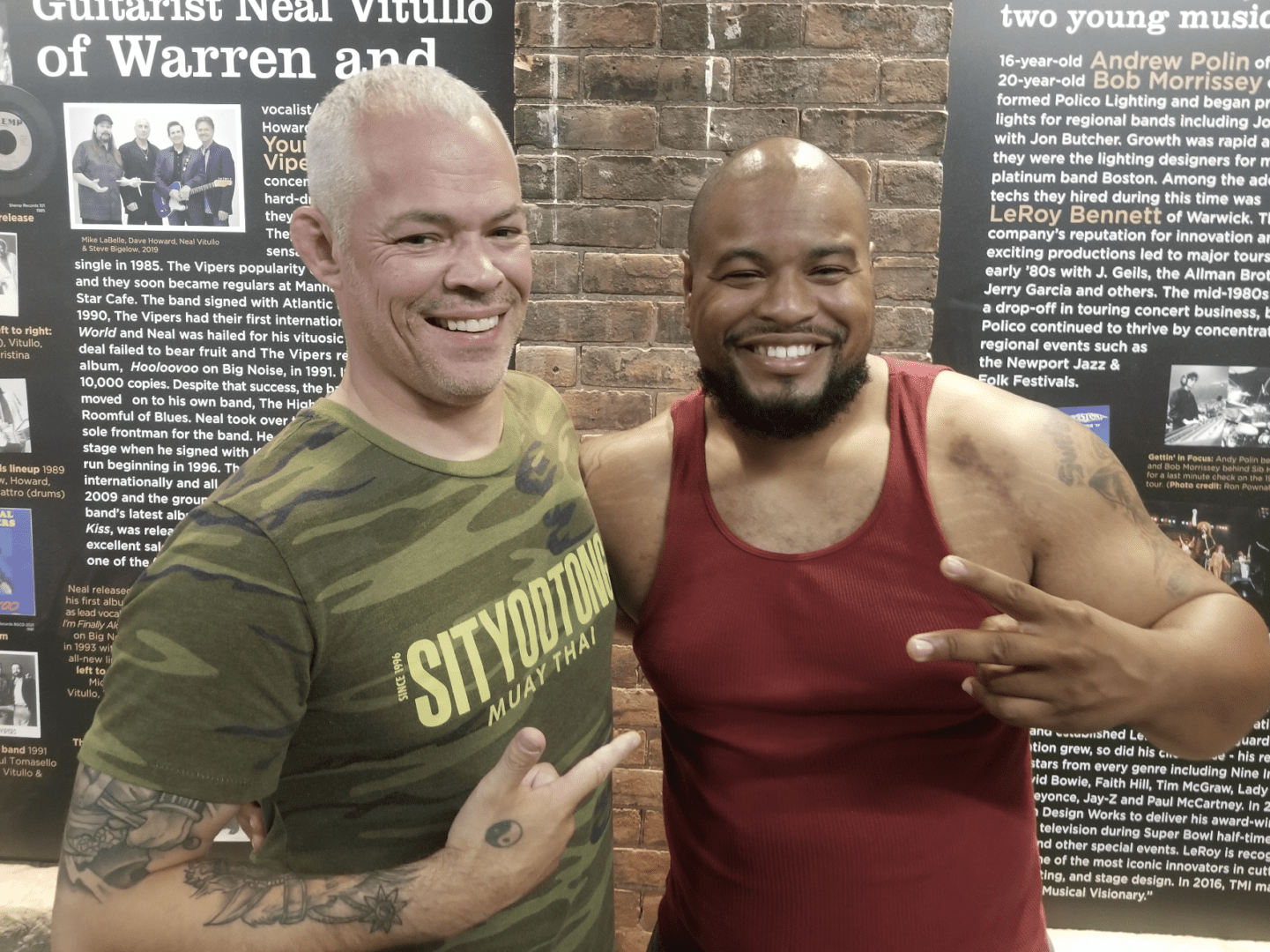 He is turning a lot of heads in the world of MMA. He is supremely confident. He wants to be World Champion. He is a natural talent. He is extremely well-trained. He fights out of Team Santos Fighting Academy. He has an infectious smile, but don’t be fooled. This man is an assassin when the bell rings. Some call him ‘Tyson’ because of his knockout power. He makes his home in Providence. His name is Jorge Vega.

I walked into Team Santos Fighting Academy on a hot summer night. The facility is inside the Artist Mill, located at 999 Main Street, in Pawtucket. As I entered, I observed a room full of aspiring MMA fighters rolling around on the mat. I had scheduled an interview with one of Vega’s coaches, George Thibault. After another impressive outing for Lion Fight on July 9th, it was time to sit down with Vega and learn more about him. Vega ran his record to 3-0, with 3 KOs. He sent Danyelle Williams crashing to the canvas with a brutal 5th round knockout. It was a wild night in Boston, at the House of Blues, in front of a rabid capacity crowd.

Vega was born in Puerto Rico. His family moved to the United Sates when he was eight years old. He is the oldest of five children. He has three brothers and one sister. I asked him where he grew up and he said, “I really can’t say. We moved around a lot when I was growing up. Sometimes I drive by somewhere and remember it as one of my spots as a kid.” Today he calls Providence home. Vega graduated from Central High School in 2009. He lives in a neighborhood close to Team Santos Fighting Academy.

I asked Vega about his Martial Arts background. He said, “I went to a school when I was 20. I didn’t really know what style they were teaching. I just knew I wanted to go to the UFC someday.” Fighting in the UFC is still a goal for Vega. He said, “Back then, I took classes for about two years. Honestly, it wasn’t for me. I told them I wanted to be a fighter. They told me I was too fat. So, I lost a lot of weight. I worked independently. I went from 250 lbs. to 185 lbs. Then I said, Hey, ‘I’m ready, I lost weight, I’m ready to fight.’ They told me no. They said I had no skill set.”

It would appear it wasn’t in the cards for Jorge to make his debut in the ring or cage at that time. The school wasn’t a good fit for him. It also seems the timing was not right either. It might not have felt like it to a young hungry fighter like Jorge, but much bigger opportunities to pursue his dream of becoming a professional fighter would appear down the road.

After that, Jorge started living his life. His dream of becoming a professional fighter never died, it simply went on the back burner. In the following years, Jorge entered the work force. He started a career in retail. He worked at Bed Bath & Beyond for about five years. He recalled, “Time went by quickly. I had a few different jobs. It was not motivating. I wanted to be a fighter more than anything else.” Then fate would step in. Jorge explained, “I got into a street fight. It was over quick, and the other guy looked pretty bad. I didn’t have a mark on me. It was an unfortunate situation, but it reignited my need to fight. I wanted to do more with my life. I didn’t want to continue working at a regular job. Just like Mike Tyson, I feel like I have a beast inside of me. I needed to let that out. I was at work having to be polite to people being an asshole to me. It was killing me inside. I wanted to let go of all this frustration I had.”

Jorge started visiting different fighting gyms and schools. He even visited Team Santos one time making his rounds looking for his new Martial Arts home. He said, “Back then they were only doing Jiu-Jitsu and I wanted to do striking. So, I kept trying different schools but none of them felt right. I was stuck. I wanted to fight. I wanted to be on TV. I wanted to be in the UFC. It’s difficult to be stuck trying to get unstuck. I went to another gym, and they were talking about Mat Santos gym. I came back here and met coach George Thibault.” The rest as they say is history. Vega said, “Coach George was not the nicest guy to me in the beginning. Later, coach explained to me why. People come and go, and I understand that. He didn’t know me yet. To get his attention I worked hard. I trained my ass off.”

Jorge Vega felt like he had finally found the place he was looking for. Coach George is a highly respected martial arts instructor. His background covers multiple disciplines spanning over four decades. Jorge was now a regular in George’s Muay Thai class. Up until this point, Vega wanted to be in an environment where he could learn striking. Well, he was definitely in the right place for that now, but more importantly, he was surrounded by the right teachers. Team Santos produce winners. That’s the bottom line.

I asked coach George how Vega finally ended up getting his attention. He said, “There was a guy in the gym who already had around 15 professional fights. ‘Tyson’ (a nickname for Vega) was giving him all he could handle. Tyson made him quit three times. In our gym you do not quit. You can stop and puke or bleed out, but no quitting. No matter what, you finish the round. That’s it. Plus, Tyson knocked out our other heavyweight too. Then he had my attention.” While coach George was recalling his story, I noticed Jorge was looking at his coach with total respect. I could see the bond between these two warriors. It was plain as day and as strong as it gets. While the three of us sat and chatted I noticed they go back and forth joking around together. However, when I watched Vega fight on pay per view television a week earlier, there was no joking. They were all business in the ring. Jorge’s corner consists of George Thibault, Jorge ‘Fluffy’ Hernandez and the general of the team, Mat Santos. Together they are known as the ‘Triple G’s.’ These three corner men bring a wealth of knowledge and experience for Vega to learn from. I asked Vega if he was a Muay Thai fighter. He said, “Muay Thai-ish.”

Team Santos continues to work with Vega to expand his fighting style and make him a well-rounded fighter. One thing I noticed watching his recent fight in Boston, Vega keeps calm even when his opponent is putting pressure on him. I asked Vega what goes through his mind when he is walking to the ring. He said, “When I started fighting, every person in the crowd was against me. So, I had to tune them out. Today, I have fans and its different for me because I never had them before. I guess I still have the habit of tuning out everything around me when I’m fighting.”

Jorge Vega has come a long way in the ring and in life. He is finally living his dream of being a professional MMA fighter. His confidence level is very high. Is he overconfident? Only time will tell. For now, he is an undefeated heavyweight with devastating knockout power. That’s a pretty good start.

Team Santos have set their sights on the Lion Fight North American Heavyweight Championship currently held by Warren Thompson. A fight between Vega and Thompson could happen as early as this fall. We will bring you details as they unfold. If you would like to become an MMA fighter like Jorge Vega visit Team Santos Fighting Academy in Pawtucket. You can also visit them online at matsantos.com or call (401) 578-4847.