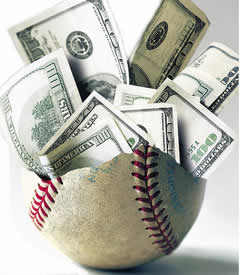 It’s all about the money!

As Covid-19 still affects our daily lives we find that professional sports are revving up, and our hopes that there will be no fall out.

We are now at what traditionally is the halfway point of the major league baseball season. The 4th of July always began the countdown to the play-offs, magic numbers begin to get spoken about, and how many teams that must be jumped over discussions usually start now. The 4th of July is the time for renewed interest, if only for a few weeks for teams to make their move up the standings. Not this year, not the summer of 2020. The biggest question is will there be a season in any sport this summer?  Well, there is some good news and some bad news. Let us run it down.

Baseball is about to begin with an abbreviated and modified and shortened 60 game schedule. Games will be restricted to divisional play and it will be regionalized. The reason is to reduce travel and the risk to the health of the players and the staff of the teams. There will no fans in the stands (until they decide it is “Safe” to allow some fans in to attend). Both basketball and hockey who stopped their seasons when the pandemic hit in March will resume their playoffs and crown champions for the season and both sports will have no fans in the stands (until they do). Why, in this time of a worldwide pandemic, are pro-sports insisting on starting or finishing a season that little or none of us really care about? One word – MONEY! In one famous movie quote “when they say it’s not about the money – rest assured IT’S ABOUT THE MONEY!” or in another movie the theme was “SHOW ME THE MONEY!”

As these sports begin to resume and finish the season, as the players gather to return to practice and train, the reports of positive corona tests among the players, coaches and staff have increased. Some players have opted out from joining their teammates and decided to sit out and wait until the all-clear comes from experts in the medical field.

Social distancing in any sport is next to impossible, and it is difficult for the fan base of these sports not to have games being played. To the average fan, sports is the common flow, a tapestry of their lives. It is the moments that happen on the field or in the big game that the fan remembers forever. The last time that the Major baseball season was canceled was in 1981 due to a strike by the players. The bottom line was – it was about the money.

The message to the fans now is that the players want to complete the season or, in baseball’s case, start the season, and while it is true the pandemic has caused all sorts of problems and at this moment the question remains, when does the safety and health of the players outweigh that of the bottom line? Is it about the need for the athlete to get back to playing for the competition, or for the paycheck?

The bottom line is that most fans love their sports, children are heading back to their little league teams or softball teams or their soccer teams, and adults are going back to their amateur teams as well. For those who choose to play, it is truly for the love of the sport and of the competition. But they could live without it if they find that their health is at risk. They know that they have the choice to play or not and it will not affect them financially, but for the professional athlete this is not the case, so the athletes will be sectioned off and isolated to play their games as “made for TV” events so the rights will be offered to the fans as a pay-per-view competition.

Yes it is the business of making money mentality and the rules of the pandemic don’t apply to the owners or athletes, we all as spectators and fans hope in the long run that this was all worth it to them- so let the games begin and keep your fingers crossed!

Note: As we go to press, the Ivy Leagues have canceled their entire sports season at all Ivy League schools.